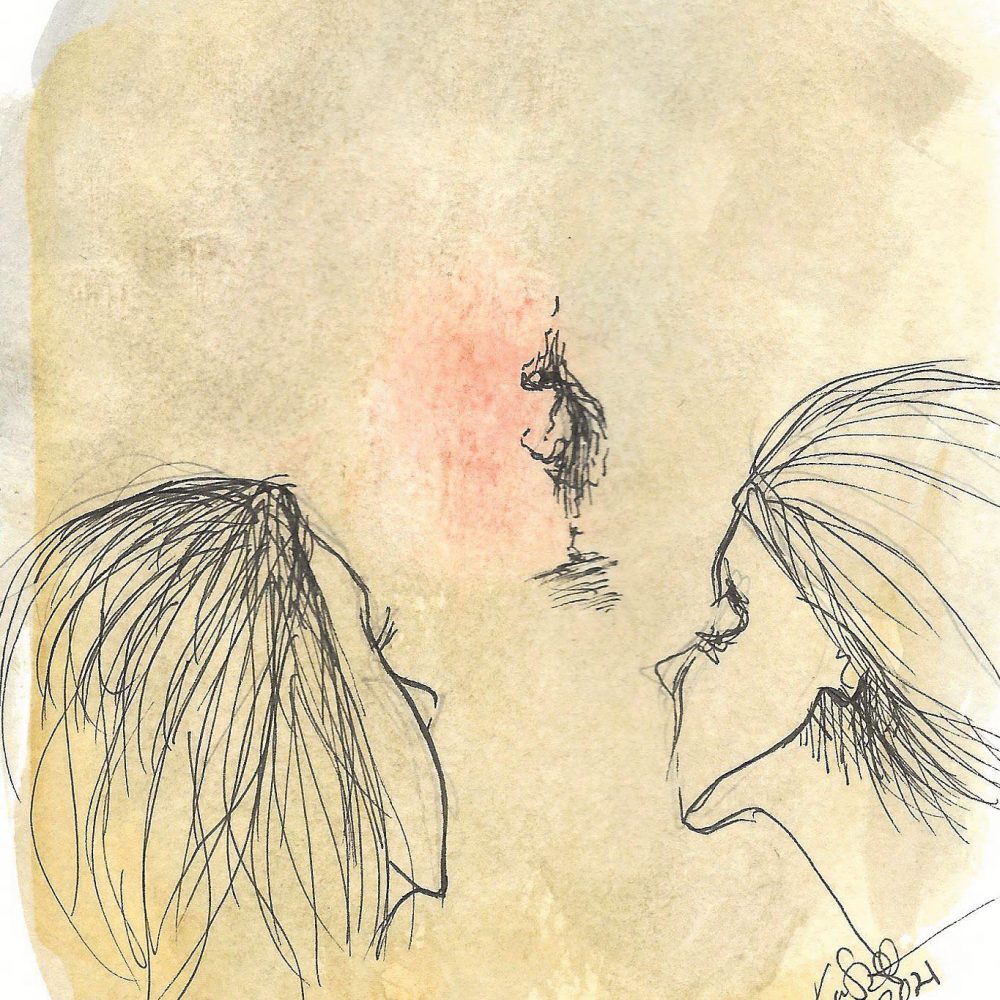 They picked wildflowers that day. Near the split rail fence at the edge of the property. Two sisters, palms left sticky with pollen from thin velvet stalks. Chins buttery yellow from pressed petals, eyes open wide with curiosity. The adults were all in town at a fancy party, all except for Grandma who slumped dozing in her rocker on the wrap around porch far, far in the distance. The sisters tasted freedom, venturing further and further across the farm. By dusk, the sun sank into the fields, and they’d gathered and plucked their baskets to brimming, and wandered their way near to the neighboring lands.

They collapsed in the grass and scrutinized their collections, they gazed up at the gloaming sky, and they heard a slamming screen door coming from the direction of Mrs. Godfrey’s house.

“Look” the littler sister said, as she crept through some Queen Anne’s Lace, parting the tall stems. The older girl followed the pointing finger of her sister, and watched as Mrs. Godfrey hauled a large, rolled up rug out into the grass.

The girls crouched and peered like spies, thrumming like hummingbirds as Mrs. Godfrey strained against the weight of the load, then tumbled onto her backside. They gaped when a man’s foot poked out from the layers of carpet. Watched as Mrs. Godfrey scrambled to her woodshed and returned with a jerry can, then squirted gas all over the lumpy pile of carpet and man. When she paced backwards and lit a match, the girls gasped.

Flames filled the darkening sky and Mrs. Godfrey hovered like some grim witch, poking at the fire with a long stick. The girls looked into each other’s eyes and thought about a lot of things. About Mrs. Godfrey at the church bake sale with a black eye, blaming it on her own clumsiness. Or at the fall fair, with a sprained ankle. Last spring she wore a cast on her arm all the way until summer. The adults talked in clusters and the girls listened in corners, and what they knew was that Mr. Godfrey could easily get out of temper. And that Mrs. Godfrey was not clumsy at all.

“We better get back,” the oldest sister said. They stayed low until they couldn’t stand it anymore, then began to run as fast as they could. They clambered up the steps, kissed Grandma on the cheek and flew upstairs to wash. They brushed their hair and donned their nightgowns and climbed into their beds. They perked up their ears and waited for their parents to come home and promised that no matter what, they would never tell on poor Mrs. Godfrey.

“Girls,” their mother asked them, days later, when talk in town was of nothing but the disappearance. “Did you see anything strange the night of the fancy party, over by Mrs. Godfrey’s house? The police want people who saw anything to come forward.”

“No ma’am,” they said. “We saw nothing. Nothing strange at all.”

Sara Dobbie is a Canadian writer. Her work has appeared in Flash Fiction Magazine, Flash Frog, Sledgehammer Lit, Trampset, Ellipsis Zine, and elsewhere. Her debut collection is forthcoming in 2022 from ELJ Editions, and she's a reader for Tiny Molecules as well Fractured Lit.