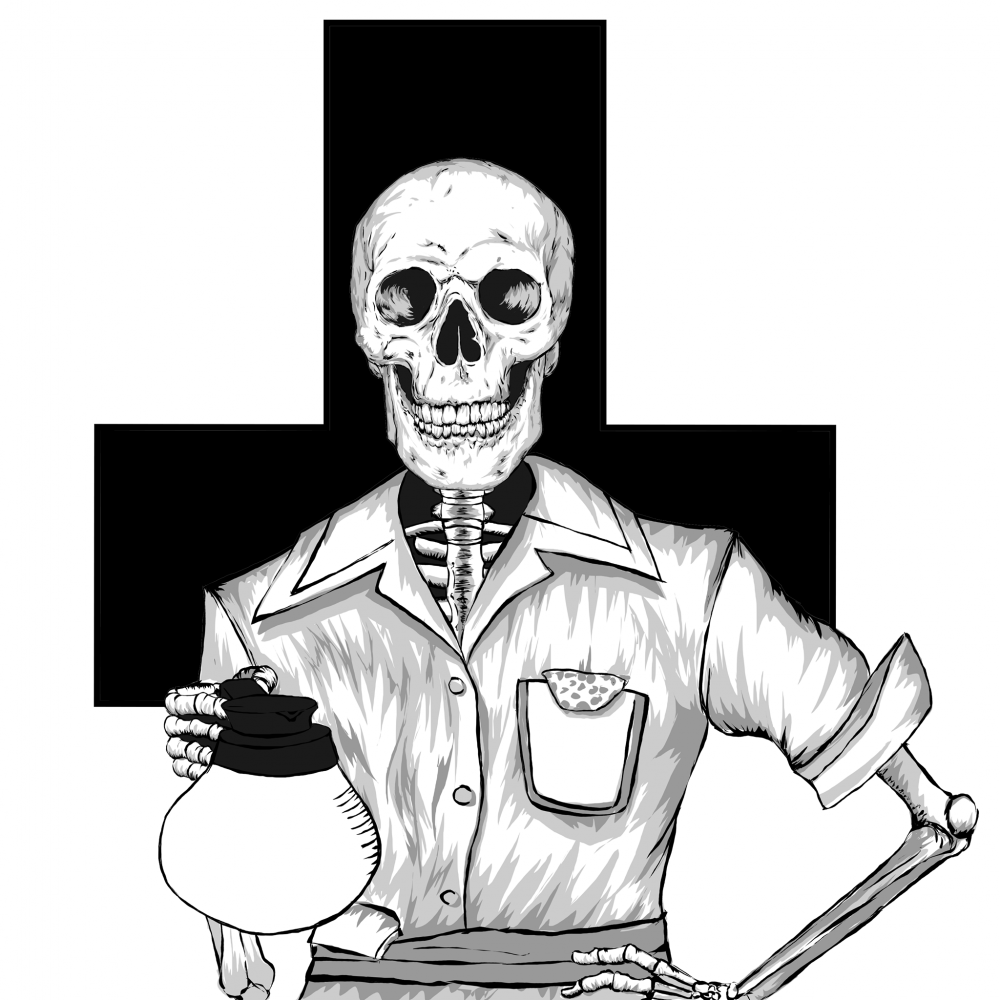 The man had said to live by The Good Book and all of our problems would be solved. How to not lose our entire group, but grow it like our ancestors had—Sarah, Abraham, Ishmael, Isaac, Rebecca, Jacob. Each named by another, unlike us, who recently re-named ourselves, and some would say badly. How to identify sins, such as envy, greed, and gluttony, like when we killed a wild boar and ate until we were sick. How to stay positive through war, plague, pestilence, all that we’d survived before but might succumb to the next time around, like Teacher Julie finally had. The man on the record player had started to say where to get The Good Book, but then the battery died and that was our last double A.

The Good Book would tell us How to Live and that was all we wanted, even Beatrix Potter, the youngest and most despondent among the five of us. So, we began moving from town to town, each as empty and dusty as an abandoned bird’s nest, the cold whistling through the bones of our forefathers seated in stalled cars and caught mid-stride along sidewalks, their phones dead in their hands. There were words everywhere—on billboards, old fliers, posters. Most of them concerned how to avoid the end, where to hide from the latest conflict (meat lockers, bank vaults, basements, like the one where we’d been napping). There were so many words, but nothing any of us would call good.

Walking gave us purpose, that and looking for the book. We never met anyone else. At each new town, Beatrix Potter would call, “Wassup, beautiful? 517-2936”—something he’d found on a napkin on a café counter, in front of a smiling skeleton holding a coffee pot. Sometimes his words would echo, which was even worse than silence. We began to pick through vacant buildings and read many interesting and irrelevant things. How to set a table properly. That a premiere happens but once. If you prick holes in the bottom of a check, it takes longer to clear at the bank. That a man named Elvis was once king. Slowly we were learning about our past, what it had meant to be the human race. The many small things that together showed you were alive.

According to our old paper calendar, we’d been searching for one year, two months, and five days when we found The Good Book. It was buried under a pile of clothes in a kid’s bedroom up North. We recognized it right away by its heavy black cover and gold lettering that said, “Charging into the Future”: It was by far the finest book we’d ever seen. Beatrix Potter did his strange ululation, but this time it sounded joyful. In the book, row upon row of faces looked out—hundreds, in fact. They wore earrings and hairbands, braces and braids. One girl even had a big flower behind her ear. Underneath each picture was a wonderful name: Bethany Goldstein, Billy Tsang, Michael Woods Jr., Nikisha Holmes. We sat in a circle and took turns reading about these people and their accomplishments: Best Legs, First Chair, Biggest Flirt, Most Likely to Succeed. Then we read the handwriting we could decipher, with advice about summer, friends, enemies, love, and life. We read until the sun set and then we made beds among the clothes in the room. It felt like a new beginning. We could see what we were supposed to look like—smiling and clean. The pictures showed even a tribe as small as ours could be champions. That if you had an entire book of good words to live by, like the man on the record said, you might just stand a chance of being saved.