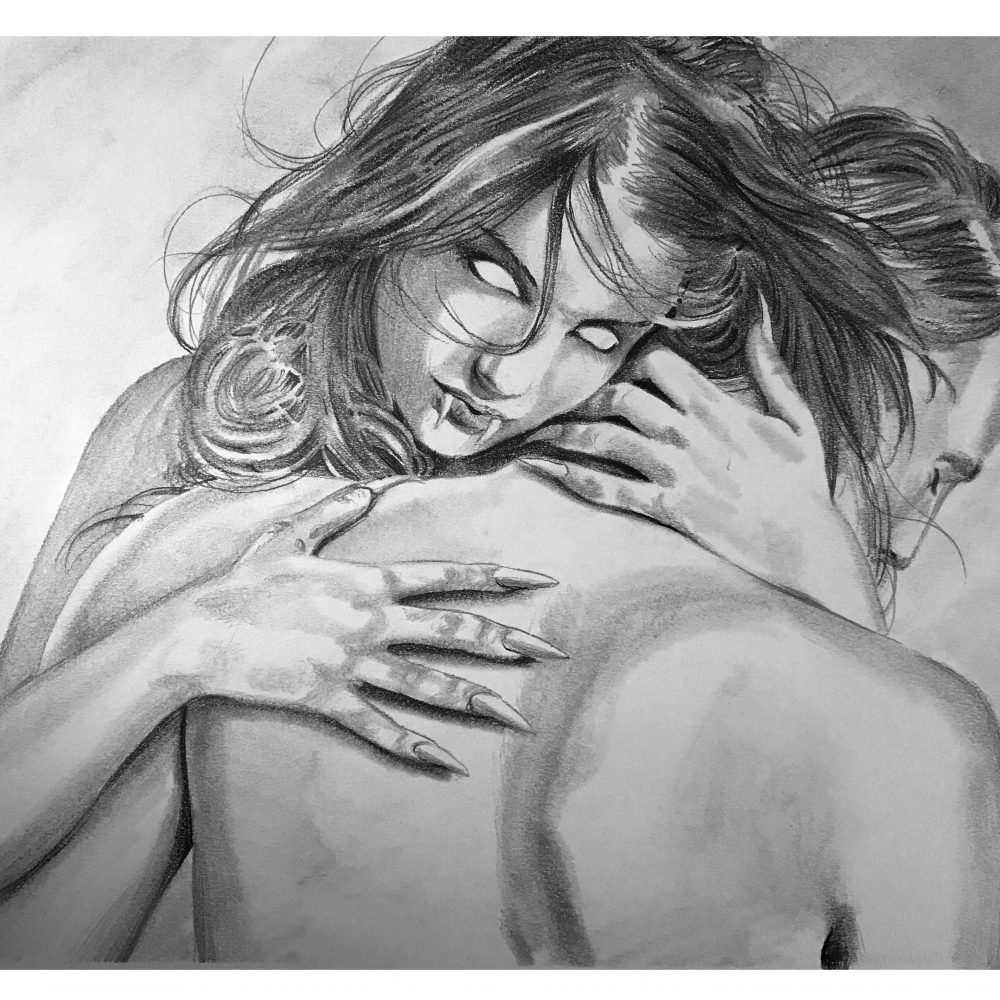 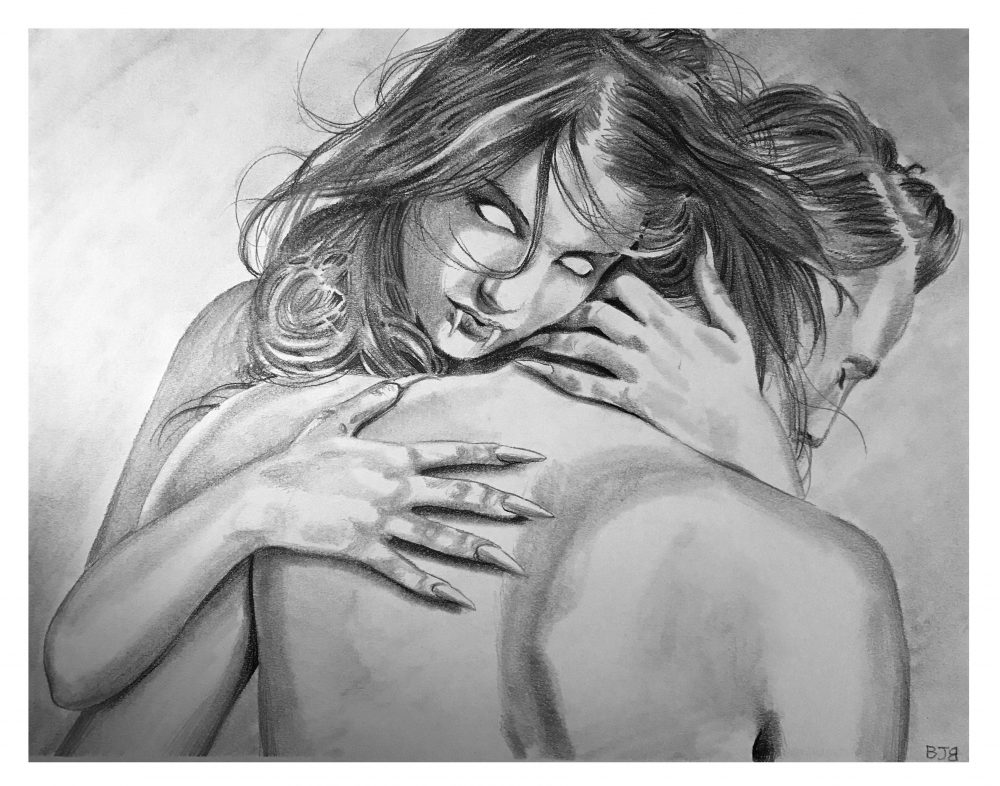 “You’re so cute, I could just eat you up,” she says, and he’s not sure if she’s mocking him. “Imagine, a big, strong man like you afraid of monsters under the bed.” She rises onto one elbow, leans over him, her hair framing their faces as she kisses him.

She sighs and burrows down next to him, her head on his shoulder. They’ve been dating four months and soon she’ll meet his parents. He won’t meet hers, she doesn’t have any. It makes him sad to think of her all alone in the world. He wonders, sometimes, how all this happened, how she and he went from flirting at the bar to what they are now which is, it seems, a couple. It snuck up on him. She’d started staying over, and it was nice to wake up next to her. Then she had a toothbrush in the holder, then a whole drawer in the bathroom filled with a mystifying array of little bottles and things that smelled good and things that smelled like medicine. Then she had her own side of the closet. He hadn’t so much asked her to move in as acknowledge that she had.

But now she starts to slide the blanket off his legs again, and he pulls it back up before it’s all the way off his ankles. She giggles. “I’ll keep you safe,” she says, affecting a deep voice. He chuckles, but he’s annoyed.

It is hot. But Mike has to sleep with a blanket on his legs. It keeps the monsters away. He’s known that since he was a little kid. There are rules – every kid knows there are rules. For some kids, it’s a nightlight. For some, it’s having the closet door closed. For Mike, it’s keeping his legs under a blanket. If his legs are covered, no monster will reach up from under the bed and stroke his ankle with a cool hand. No monster will grab his ankle and hold on, threatening to pull him to God knows where. It was never any good for his mother or father to look under the bed for monsters. Monsters are crafty. Mike knows that somehow, if he leaves his legs uncovered, one night he’ll feel that touch on his ankle. It isn’t worth the risk. There was just that one time, after his brother’s destination wedding in Mexico, when he woke up in his bowtie and boxers with his leg bare and even hanging down next to the bed. Just that one time.

Kora is sympathetic, if also amused. He hadn’t wanted to tell her why he had to have his legs covered at night. He’s embarrassed. It came out, though, eventually. And she hadn’t laughed. She’d snuggled close to him and they’d talked about fear and where it comes from –  the collective memory of the human species perhaps?

It had been colder then, and they’d both wanted blankets. Now it’s summer, it’s hot and sticky and if he didn’t need the blanket, he’d kick it aside, too. Mike feels the blanket start to slide again.

“Kora, c’mon,” he says. “I know it’s stupid but just leave it be.” That laugh again. It’s a cute laugh but it’s getting on his nerves. He has to be up early to work tomorrow. He turns his back on her, tucking the blanket under his knees to anchor it there. He feels her toes start to pull at the blanket again. She needs a pedicure, her toe scrapes the back of his calf and it stings.

“Kora!” he says. She puts her hand on his shoulder and he feels her breath in his ear. It’s a cool breath, it makes his ear numb. It smells as if she’s not brushed her teeth in a week. That’s not like her, Mike thinks.

“It’s so cute you think there are monsters under the bed when you’ve got one right here beside you,” Kora says.

Mike thinks she wants sex. He starts to roll over toward her but she stops him, her hand cold and strong. She bites his neck, a little nibble. He hears a noise low in her throat, like a growl. She’s a bit kinky, it’s one of the many things he adores about her.

She bites him again, but this time it hurts. “Alright, naughty girl,” he says, wrenching himself from her grasp and turning to face her, thinking it might be rough play tonight.

She smiles at him with all her teeth, sharp and too many of them, and her eyes glowing like the devil’s and her hands reptilian and clawed. “Right here beside you,” she says.

“Kora?” He can’t process what he’s seeing, his girl with her beautiful, big eyes gone yellow and luminous, her long-fingered hands thick and scaly.

“Oh Mikey, I’ve wanted this for so long. Ever since that night in Mexico.”

He’s on his back, she’s up on her knees, looking down on him and throwing a shadow on the wall behind her that can’t be hers, it can’t be.

“I just had to wait for the right time,” she sighs, her voice hollow and inhuman. She stretches and her human skin splits and drops on the bed, holding its form like a dry cicada shell.

“Under the bed,” she says through a mouthful of teeth, her words jumbling. “Silly boy.”

She reaches for him, and Mike screams and screams as her claws take hold and rip.