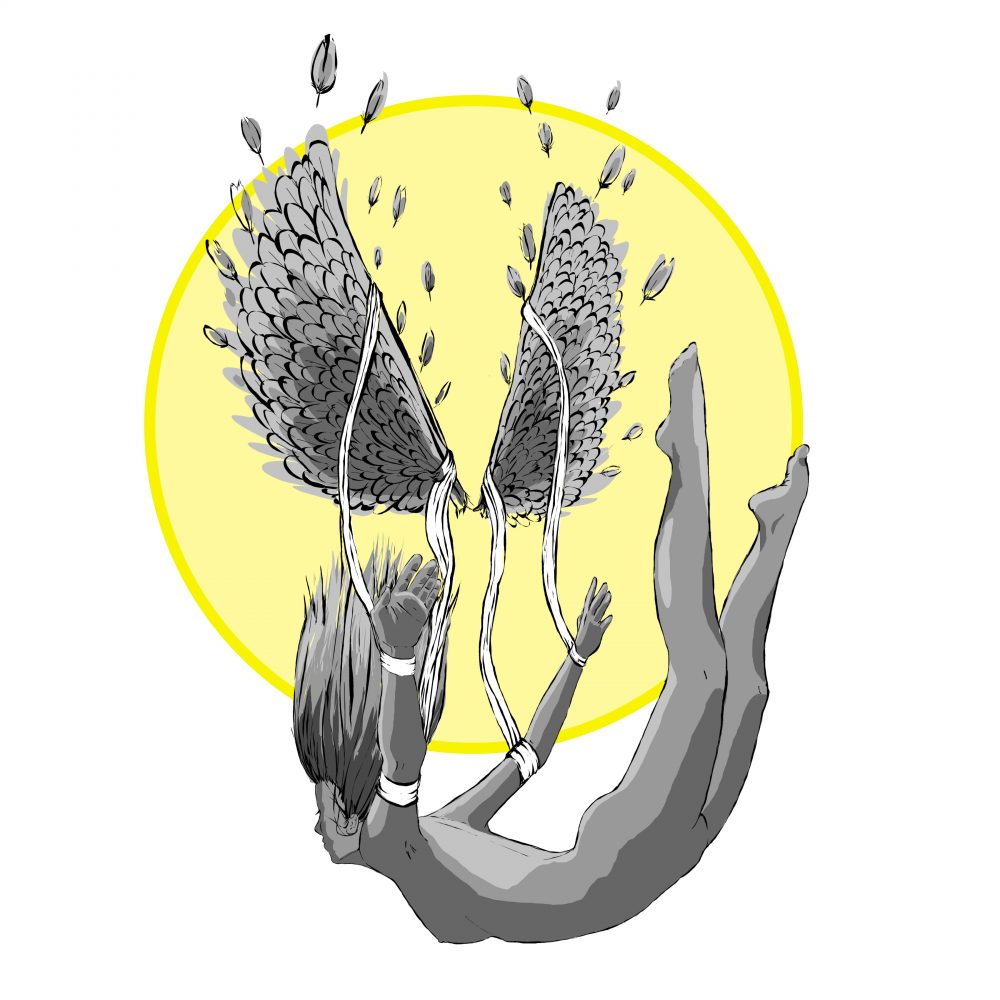 Selling heirlooms online, pocketing pennies from tip jars, shaking vending machines and performing surgery on our piggy banks, my father is King Midas—money is his life source, the blood that flows through his veins. We’re the rosewater that washes his treasures and makes them cheap.

In the frozen section at Walmart, in the park past the seesaw, along theater 5 amongst strangers at the movies, my mother is the mother from Hansel & Gretel—abandoning us to fend for ourselves, to find our way back using invisible bread crumbs. Her presence during her absence would’ve been far more satisfying than any candy-house.

Following behind her car, searching for her in the mall, peeping through her bedroom window and interrogating his friends about her, my brother is Peter Pan—never growing up, usually high as a kite on pixie dust, certain some Wendy girl will happily follow him to his Neverland. Be he’s just a lost boy.

Once in my arms, now out of reach, out of the neighborhood, out of state, my one and only boyfriend turned out to be the Gingerbread Man—run, run, as fast as you can. He did. And never came back. Perhaps I wasn’t sweet enough or in the perfect cookie-cutter shape.

Emaciated to portly, colossal to miniature, received to disowned, my sister is Alice—taking pills and tea from mad acquaintances, eating cakes and tarts when famished than retching to downsize. She’s petrified over how the world will see her. We tell her she can’t go on like this—she’ll end up disappearing like Cheshire. But to her, everyone is Tweedledee and Tweedledum when it comes to her pain.

First Doc, then Happy, next was Sleepy, perhaps even Bashful at one point, my aunt is Snow White—seven, eight, maybe nine little suitors competing for her love, for she’s the fairest of them all. At least that’s what she believes the mirrors she admires so much are telling her.

No one’s The Piper or Rumpelstiltskin. No one wants a child to look after.

Wigs, lipstick, dresses and polished nails, my uncle is the wolf from Little Red Riding Hood—attending dinner parties, getting fixed at the beauty salon and gyrating amongst drunken company at the disco-bars as “grandma” rather than “grandpa.” We’ve chastised his lifestyle; ostracize him from family outings and reunions, stating that his behavior isn’t normal. He says we need to accept him—the real him. But, really, he’s just a wolf in sheep’s clothing.

A laptop that sat alone at a Starbucks, a TV that blared snow through a bay window, a motorcycle left running on a curb, my best friend is Goldilocks—taking candy from actual babies if they’re munching on her favorite flavor, stealing clothes off store mannequins, exposing artificial parts. She’s dealt with many angry bears due to her sticky hands. One day, she’ll rob the prisons blind.

Castles in the skies, bystanders with animal faces, oceans existing under puddles in sidewalks and shadows that predict the future, my grandmother is Sleeping Beauty—dreaming of fantasies amplified by her Alzheimer’s; stuck living in the wrong world. Prince Charming died long ago, so she might never recover.

I use boards for structure, feathers for lift and wax to hold it all together. I’m Icarus—searching for a brighter life. The sky’s the limit. However, as I chase my dreams, my little heart giving everything, I lose sight of the ground and run into reality that is as sweltering as the sun: dreams only come true in fairytales.

Kieron Walquist lives in the Midwest with his family. His stories have appeared in 101 Words, Cheap POP, Fewer Than 500, Gingerbread House, The Molotov Cocktail and Vending Machine Press, among others.