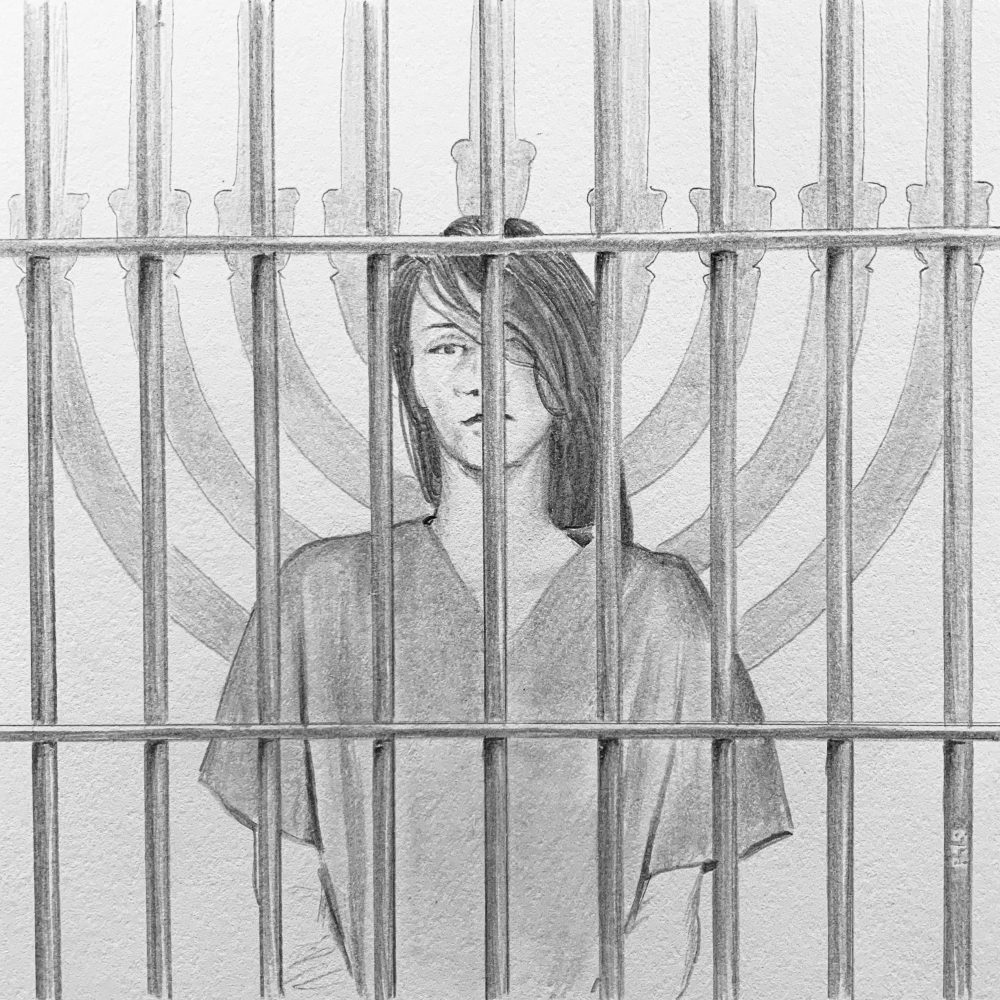 Rivka’s sister, Shira, is twenty-seven and somewhere upstate. On the other side of the bars, guards are treating her like a sideshow act, gawking, and whispering, and weary but curious. The warden passes her last meal through the steel bars, and she keeps her eyes lowered as she receives the tray.

“Potato pancakes. Enjoy,” the warden says, but there’s no need to correct him. Latkes. She feels his eyes linger on her body, her prison pounds. She is beyond communication.  She prays.

Shira scrapes sour cream and apple sauce from condiment cups with a plastic knife, smears them on the latkes, cuts a thick slice. A quilt of oil, onion, potato wraps her backfiring brain, and she’s gone. The guard says something, but she’s years away. She is seven years old again, at the dinner table, transfixed on the menorah candles, that show God’s grace. Nine flickering flames in the street-facing window. She takes a bite and she is nine again, playing “Who Can Eat Most” with Rivka. Their mouths are floods of saliva and salt. She stuffs latkes through her lips as fast as she can, but Rivka, with her endless hunger, always wins.

Each latke bite tastes of salty sweat. Blood, semen, amniotic fluid. She chews and Shira is sixteen, again, in the bedroom she shares with her sister, staring at her unclothed body in the full-length hanging mirror. Her lightly dimpled thighs, her pear-ripe gut, her newly swollen ass give her pleasure-pain ripples.  She twists her arm, inspects her father’s prints, bruised in. Then the purple-yellow blooms on her lower back.

Before school, Shira and Rivka work heavy stockings to their waists, fasten wool skirts, button long-sleeved blouses. In the kitchen, their wigged and proper mother fills a platter with leftover latkes, leads prayer: Barukh ata Adonai… under the table, Rivka passes Shira a folded note, and Shira flattens it as silently as she can, forces a starchy swallow as she reads: Love. Gentile. Secret. Help.

In Hebrew culture, a saying: Jews don’t have history, they have memory. History is learned. Memory, felt. History. The bars, the warden, the concrete cell dissolves. The echoing voices of the solitary damned. Shira chews and she’s twelve at shul, the day she realizes what the prayer really means. While the men’s morning blessing thanks God they were not made female, women thank God for making them in his image.  She bites and she’s her mother, following tzniut, forbidden to sing before her father, show her hair. She chews and she’s Rivka, curled and jittery at school, fetal on the sticky bathroom floor. The pregnancy test has been chucked to the bowl. Shira swallows, and she is holding Rivka’s hair, a week later, same bathroom. A bite and she sneaks to the pharmacy, pockets prenatal pills.

She’s Hagar, beaten by Sara while pregnant, banished to the woods. She takes a bite and she’s Esther, in the king’s Harem, used, property. A bite and she’s Gomer, as her jealous husband threatens to thrust her naked upon men who will rape and beat.  She takes a whole latke in her mouth. She’s Rivka, now, seventeen, six months pregnant now, showing, on the living room floor crouched as their father’s fists pound her rounded back. She’s Shira at seventeen, twisted with wrath, the brass menorah clutched and raised. The brass menorah thrust down on her father’s skull. Again. God’s words, she hears: Thou shalt not kill. But, If A thief found at home, and beaten to death: no sin.

Somewhere, Shira’s sister, Rivka, lifts a full breast for her baby. A bite and she’s her niece, the near future. She is tasting a latke for the very first time, wondering at the candles.

The warden paces. He speaks to the other guards, but Rivka refuses to set her plate down.

“All set?” he says, but she is somewhere else, somewhere holy.

“Thieves,” she says. She is Judas, now, a warrior erecting an alter of new unhewn stones. She is sturdy, alight. She is pulsing and wild. She is wailing now. She is full and electric. The temple of her body will not be dismantled. The oil of her soul never snuffed.

Rebecca Fishow is a writer, educator, and visual artist. Her story collection, The Trouble With Language (Trnsfr Books, 2020), won the 2019 Holland Prize for Fiction. Her work has appeared in Quarterly West, Tin House, Joyland, The Believer, Hobart, The Nervous Breakdown, and other publications. She is pursuing a PhD at University of Illinois Chicago. Find her at rebeccafishow.weebly.com