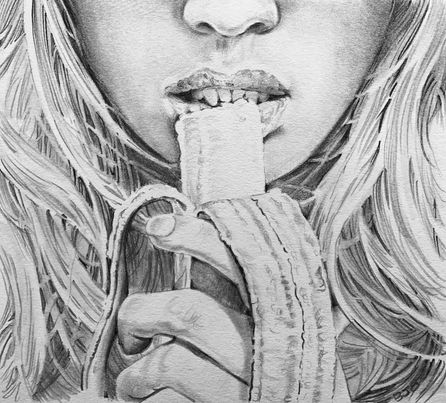 Kasey slammed her blue three-speed into the rack, locked it, and, ran across the main lawn, yanking the red elastic bands off the ends of her braids as she dashed through the wet grass. Freshly mown blades stuck to her sandal straps and clung to her toes. She’d waited all weekend to see Jack, but over in the football field, the coach was already screaming, “Shower now or stink later.” Breathing hard, she spun the dial on her combination lock, overshot the numbers and had to do it again. She swung her locker open, shoved her backpack inside and unzipped it. Still panting she finger-combed her unbraided hair into waves, wet her lips, and exhaled on a ten count, hitting eight just as Jack loomed up behind her. “Caught you!” he said. “What are you cramming, Early Bird? What’s your worm of choice this morning?”

Kasey turned towards his butterscotch eyes  and held up her biology textbook.

The Nikon 750 hanging from a black cord around Jack’s neck swung forward as he bent toward the book. Kasey drew back to avoid being hit by its lens and bumped her skull hard on the brick wall. Wincing, she forced a laugh and rubbed her head.

Jack grimaced, “Did I do that?” The cord on Jack’s neck shifted, revealing an Orion’s belt of freckles as he reached into his backpack and offered a banana to Kasey. “Potassium’s good for bruises.”

Jack waved the banana between Kasey and the garbage can across the path. “I’m not going to eat it. It’ll just squish all over my books, so your choice, Kace: trash or treat. C’mon. Save my soul. Don’t make me commit waste. Please.” The please puffed into Kasey’s lips.

Through his khakis and her jeans, his knee bumped hers. Her thigh twitched.

Kasey reached for the banana.

Jack’s fingers grazed Kacey’s as he put the fruit in her hand. “Thank you.”

Kasey nipped the top off. Behind closed lips, she widened and thrust her tongue upwards, mashing the cool sweet pulp into the ridges separating her gums from the roof of her mouth.

Jack smiled and whisked his Nikon 350 up and snapped her picture. “For the yearbook.” Spinning on his gel-tek heel, he sauntered off whistling. His textbooks poked triangles through the canvas of his backpack as it bounced against his small tight butt cheeks in rhythm with the music. Catching her breath, Kasey took another bite.

A sasquatch-shaped shadow fell over her. A baritone falsetto cooed, “Oooh, Jack, fancy running into you here.” Mr. Zircon’s fingers fluttered over the three-day stubble that couldn’t hide his acne scars. He shimmied his pudgy chest and widened his prune juice eyes, then reached into his saggy pocket and withdrew Kasey’s red elastic band, still wet from the grass where it had fallen as she undid her braids. He dangled it. “I saw you running across the lawn, fixing your hair, timing everything. You know that’s stalking, right? I mean, I think the rule is ridiculous.” His lips curled back, showing decades of coffee and cigarette stains. “You should have seen what I did in my day.” He laughed and hefted his leather satchel over his shoulder in a move that stretched the folds in his neck and the exposed sticky white grooves that looked like lingering scars from where someone tried to strangle him with a fishing line. “I mean, you’re not a school shooter, right? You’re just… healthy.” He winked.

Voices of students called to each other near the auditorium, football players streamed toward the gym, but Kasey and Mr. Zircon had the locker area to themselves. Mr. Zircon laid his liver-stained hand on top of Kasey’s. “The thing is, Kasey, it’s the rule. I swore an oath. I mean, I’m on your side.” He teased the flat yellow nail of his middle finger down the banana, leaving a groove.

Kasey drew back and her head was against the bricks once more.

“But I could get in trouble if I don’t report you.” Mr. Zircon leaned closer, bracing himself against the wall.

Kasey found herself staring into the mustard pits of his golf shirt.

He looked over his shoulder then whispered in her ear, “I’ll ask around the teacher’s lounge, see if anyone else saw you.” His breath was a steamy blend of scrambled eggs and Listerine. “Then you come to my office hours, and we’ll figure this out. With any luck we can let the whole thing go. It’ll be our secret.” He tyssked at the mutilated banana, then spun on the heels of his penniless loafers and whistled down the path, bobbing so his satchel bumped against the slouchy pillow of his ass. He smiled over his shoulder and winked. “See you at three.”