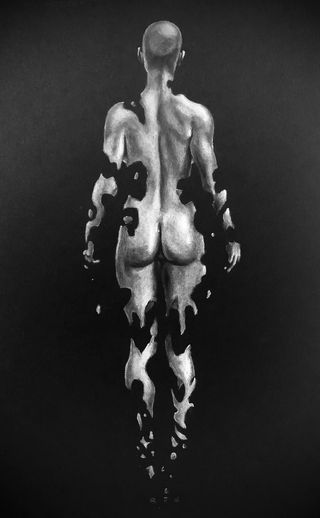 She didn’t know what it meant to fall apart, to come apart, to completely unravel until she pulled at a scab and kept pulling, like a thread, and lost a layer of dermis. It was painless, the damage negligible. But then her ex died, unexpected, and before she knew it, her hair came loose, little nubs of root and follicle pulling out from below the surface. She felt weak, exposed, and tired all the time. Then, after her aunt died, she noticed that her skin was peeling, flaking off as if from sunburn even though she hadn’t seen the sun in weeks. She wore a hat, dressed in long sleeves and long pants, and held herself tight, holding onto a tinge of normalcy. But then, her mother. The grief so profound that her toes fell off, unscrewed themselves and dropped from her feet, bloodless. She had never imagined that she was put together in such a way that body parts—limbs—would just break off, separating from the rest of her. After her toes, it was her feet, unhinged from the ankles. One day they were there, one day gone, detached, removed. Then her legs. Then her fingers, hands, and so on. Little by little, dismemberment. It was only when she finally looked in the mirror that she saw what she had become, even though by then, she had no eyes.

Jessica Klimesh is a US-based technical editor and proofreader with an MA in English from Bowling Green State University and an MFA in Creative Writing from Cedar Crest College. Her fiction has appeared or is forthcoming in TIMBER, Strukturriss, Bending Genres, The Cafe Irreal, FlashFlood Journal, and elsewhere.