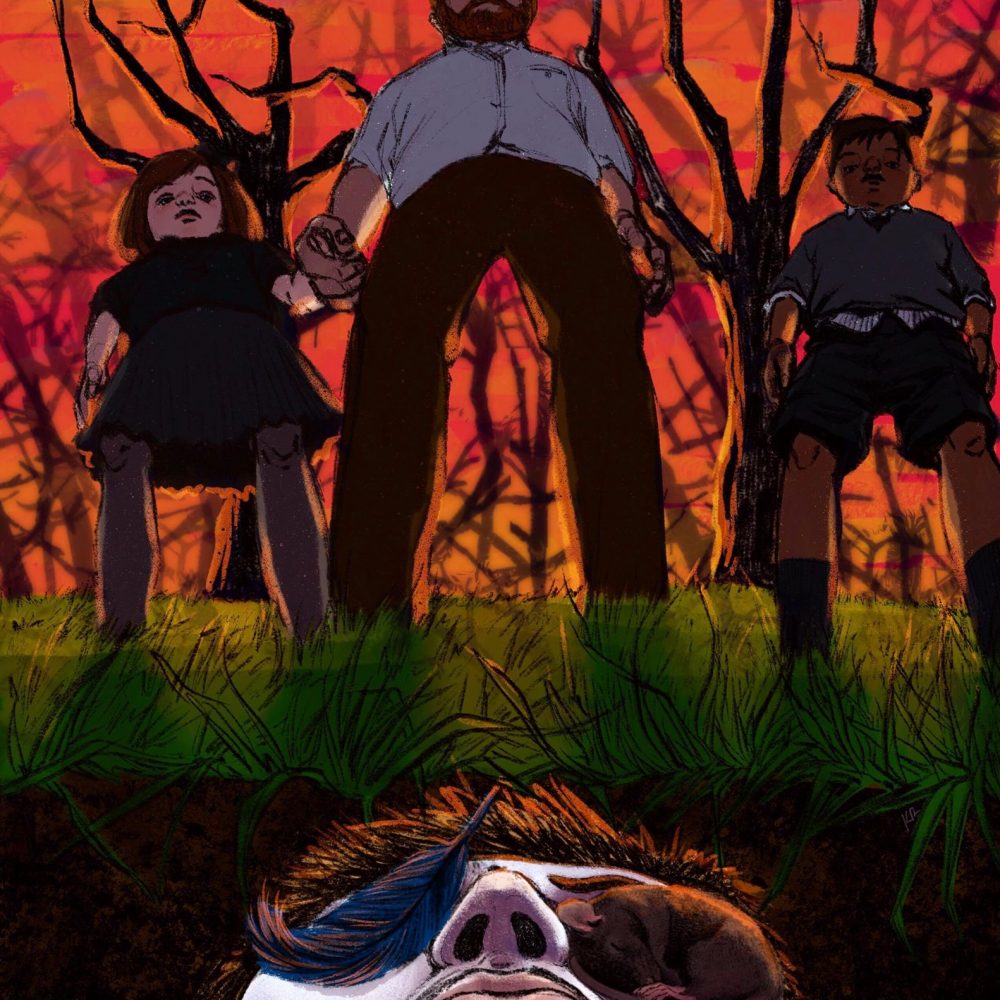 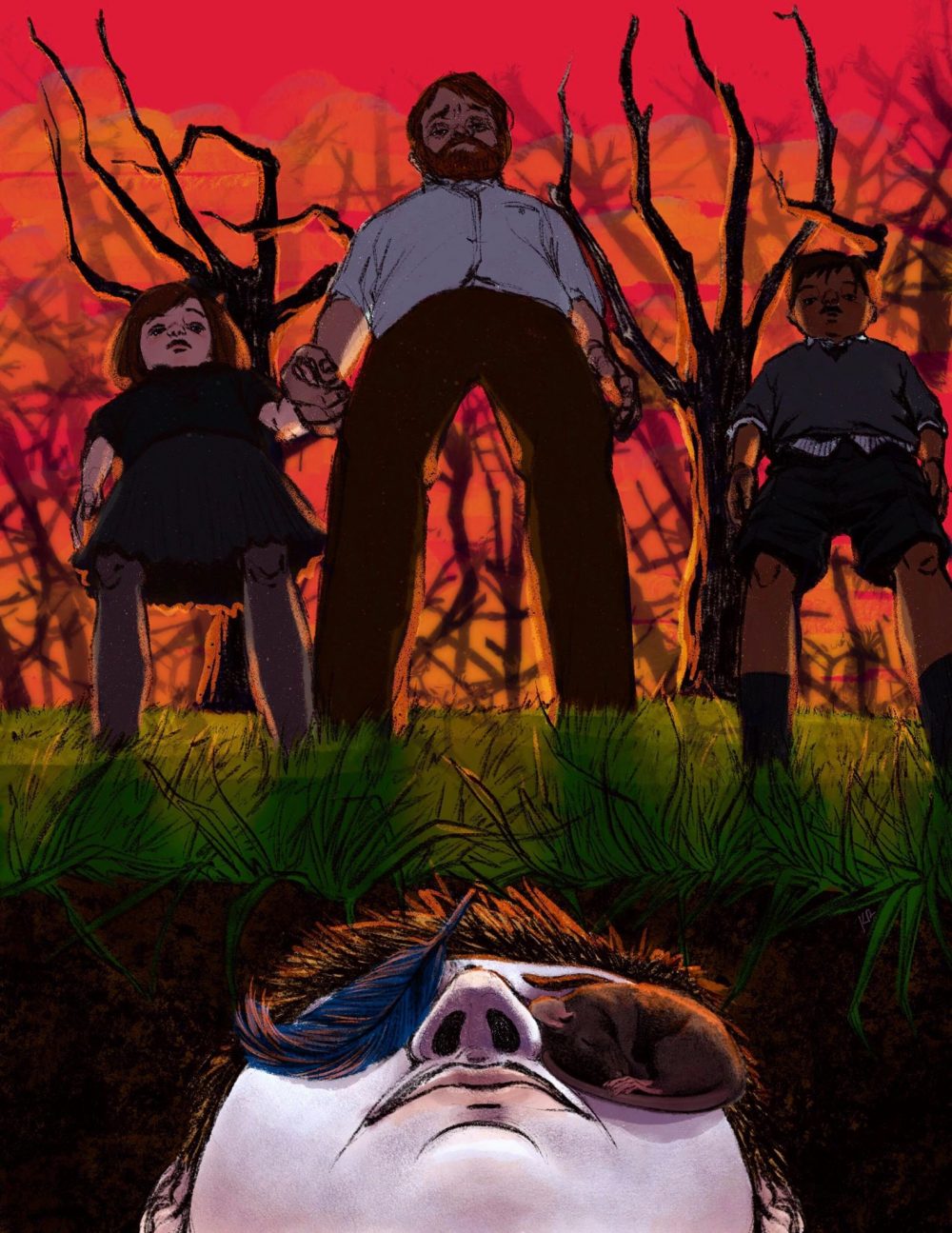 I walked outside and found several children playing in the field behind my house. I had never had children of my own, not by conscious choice, it just never quite happened, which now seemed like a good thing in my later years. I was free to do what I wanted.

I leaned on the trunk of a dead cherry tree, its limbs casting shadows like broken fingers onto the dirt and wild grass around me. As I watched them, I thought about all the moments when I could have had a child, and before I knew it, I was drawn into their make-believe drama.

They were conducting a funeral. One child was dead, playing at it I think, and they’d dressed him up in a tiny perfect suit and dusted his face with self-rising flour. They were all wearing their finest clothes, one little girl, the smallest of them, even had a black veil covering her face.

I lingered by the tree for a time until a girl saw me and motioned me over. She was so earnest that I complied. This is no time to skulk about alone, she whispered to me, her mouth stained red with some sort of berry popsicle, I guessed.

Up close now, I could see they had dug a shallow grave, maybe a foot deep. One boy sniffled and dragged his suited wrist across his nose, while another boy wrapped an arm around him and patted his shoulder consolingly. The same girl who had called me over stepped forward, and in a clear strong voice said, Remembrances!

One by one, the children stepped forward and said things like: he could eat Captain Crunch and the roof of his mouth would never get sore, or he once caught a low flying bird with his bare hands, or he could stare into the sun for days without blinking. It came to me and they all waited. I had no idea of what to say, put on the spot like that. I hadn’t known the boy personally and I didn’t want to say anything that might offend. He once saw a tornado touch down and he wasn’t afraid, I said. I had seen a tornado once when I was a boy, and though I had been very afraid, a part of me had always wished that I hadn’t been. That I could have stared and laughed in the face of destruction ripping through the plain. I pictured the boy before me and thought that maybe he could have done that thing that I couldn’t. Either way, my answer satisfied them, and the service carried on.

Once we had all had our turn, the girl with the popsicle mouth, who I now realized was the officiant, approached the body. She placed a clean, red feather on one eye and a dead mouse on the other. I swear I thought I saw the dead boy twitch when she placed the mouse, but it might have just been me. A boy, with the shiniest shoes I’d ever seen, mistook my revulsion for confusion. One that belongs in the sky, one that belongs in the ground. If he has them both, like anchors, he can find his way in between.

At this, I wanted to stop the whole display, shout at them to play something else, but they were so somber, so serious, that I couldn’t. I knew that it would be unseemly, and I pictured their small faces turned up to me in dismay and shock at my lack of appropriate deportment.

They began to bury him. Gently, but still they buried him. I wondered, and not for the first time, if this was real, but it couldn’t be. They couldn’t be burying a child. One of the adults would know and stop it, surely.

The sun was beginning to set and our shadows, mine the longest by far, stretched and distorted. If I hadn’t known the shadows were caused by children, I would have guessed something far darker; that they contained monsters. I thought then to leave, to be done with this ridiculousness, when the smallest girl threw back her veil and began to sing. She had a low throaty voice, or maybe she mimicked one, and I soon recognized the song as “Sweet Afton.” The other children didn’t join in, but I found myself moved and mouthing the words. Her voice was clear and sure, full of emotion. The song trailed off as darkness sped across the horizon, anxious to greet us.

I let out a deep breath and then sucked it right back in with force, so startled I was by the growl of the officiant. It started low and then rose to a squeal. A horrible sound; a death rattle. She began to stalk around the buried boy. The others joined her, the child at my side dropping my hand to snarl and snap at the grave. I stepped away as their fervor rose into a wild reverberation of feral voices. I couldn’t stand the sound and covered my ears but it didn’t help. It was as if the noise flowed through me, through everything. Their fierceness, their violence, disturbed me and the field shook with it.

I began to walk backwards, unable to tear my eyes away, when they all shrieked and bolted in different directions. I saw what had prompted their flight. The boy, the buried boy, sat up, dirt falling from his hair and shoulders.

The officiant sprinted passed me, saw my confusion, and came back to grab my hand and drag me away. Run, she said, run, her mouth darkened as if by blood. If he touches you, you are sure to die too.

I turned and fled.