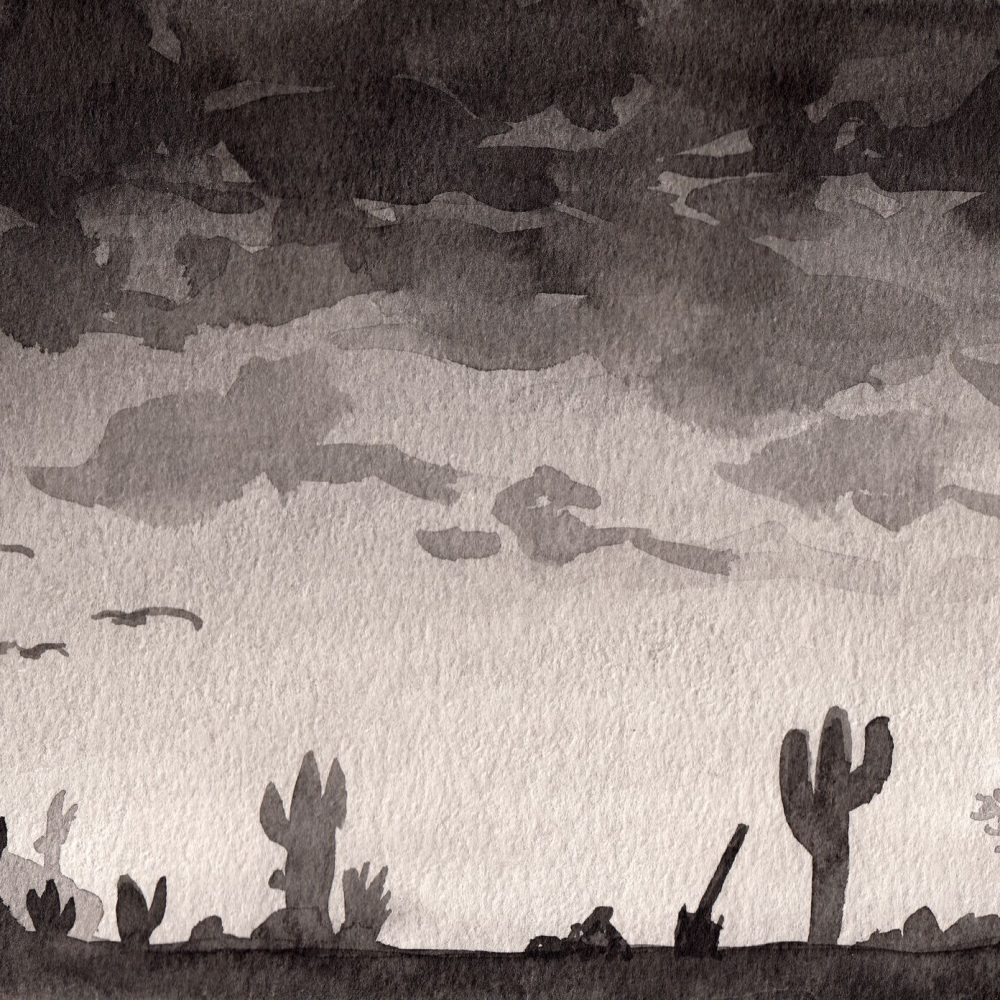 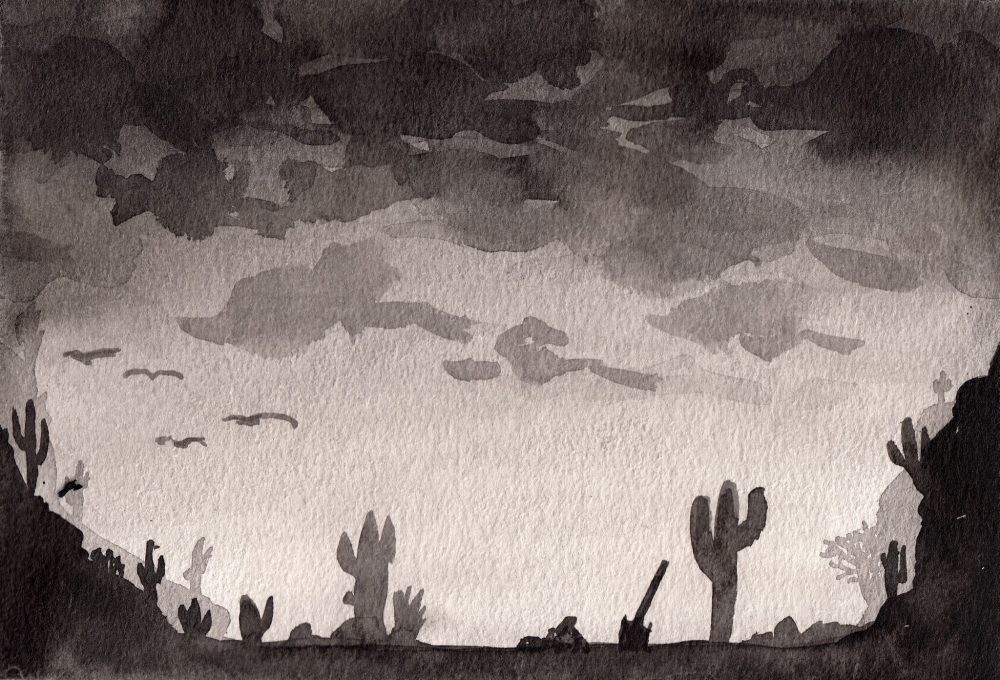 Dominic is digging his holes again, searching. His fortune, he says, he buried it out here in this sun-beaten sea of sand and sage. It was at the foot of the cottonwood along the wash, where the rain ran thin like veins—and then the flood. Or it was under the skull-shaped rock on the western edge of this land, this once-ranch where I was raised, or beneath the heap of rusty chains that rests among the tinder like a heavy coil of snakes? He can’t remember, he says. It was right here. Or maybe there. His body sags, shoulders slanted like the undone fences, face poorly hung, a portrait on a crooked nail. He plans to take his fortune and buy a drink, he says. One for every ghost that roams these high desert hills. “There are many ghosts,” he tells me, “and I’ll soon be one of them.” He knows this, he says, and he knows he will be thirsty. “But I don’t expect a fancy-pants city boy like you to understand.”

The fortune was not a fortune, after all, but a stash of musty cash, soft as blossoms from hands and time. Hardly enough to cover the gas it took me to get from L.A., much less a round for every soul beyond the veil. He’s at the final fence post now, three eastward paces from X-marks-the-spot, spade biting into the still-wet sand. He’d be getting warmer had I not unearthed the cigar box days ago, before the rain and before they let him come home. Seizures. They’re getting worse and more frequent. “Really, your father should be admitted permanently,” they said. “But he’s of sound mind and nothing if not persistent.” He was only half lucid when I first arrived. That’s when he told me about his fortune, pleaded. “We’ll be so thirsty,” he said. It took some time, but it was there, three feet beneath the dust. A life’s hoard. Little more than a pittance. I should probably say something. Tell him to stop digging. Remember the rain, I should say. The flood. This kind of land can’t drain quickly. The sand has turned to muck. Nothing is like it was. Maybe I should give it back, his fortune. But he needs to eat, and I need to feed him. Besides, I have an idea the search is all he has left to live for. I tell myself this, not for the first time, then he thrusts the spade again into the ground and his ageing frame seizes, a stone stanchion for one eternal second before he falls. The life’s weight is sudden. My shoes are bricks in the thickness, but still I run.

My Hyundai dies inside the canyon, and I have to climb, cutting my hands on sheer faces. My palms have grown soft from years away from this place, but my bones, they remember. There’s a bluff above, where he would tell me stories as a child, his eyes and throat alight with liquor, shrouded in a cloud of hand-rolled smoke. Stories of tricksters and familiars and La Llorona, the weeping woman. Stories about where the stories come from. Stories about where we’ve been and where we go. “I bought the most expensive brand,” I say, sitting on the edge. The cork squeaks free. I drink, and I hold the bottle high, mouth to the moon. My chest is a forge, and in my fist a poison jewel. “Drink,” I tell them. “Drink.” Even the sky is choked with ghosts.

William R. Soldan lives in Rust Belt Ohio with his wife and two kids. He has a BA and an MFA and teaches writing at Youngstown State University, but he knows none of that impresses anyone. His work has appeared in publications such as New World Writing, Jellyfish Review, Bending Genres, Anomaly Literary Journal, Shotgun Honey, and many others. His debut story collection, In Just the Right Light, is forthcoming from Unsolicited Press in March of 2019. You can find him at williamrsoldan.com if you'd like to connect.