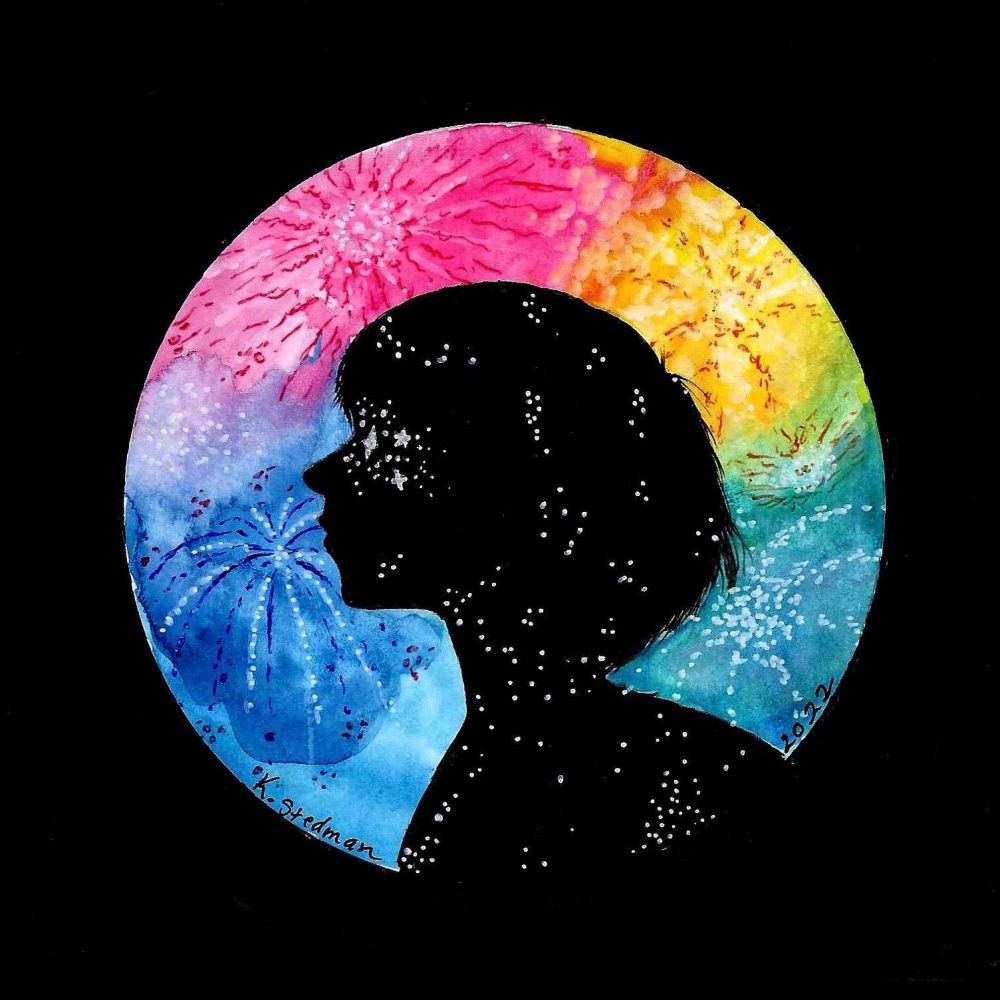 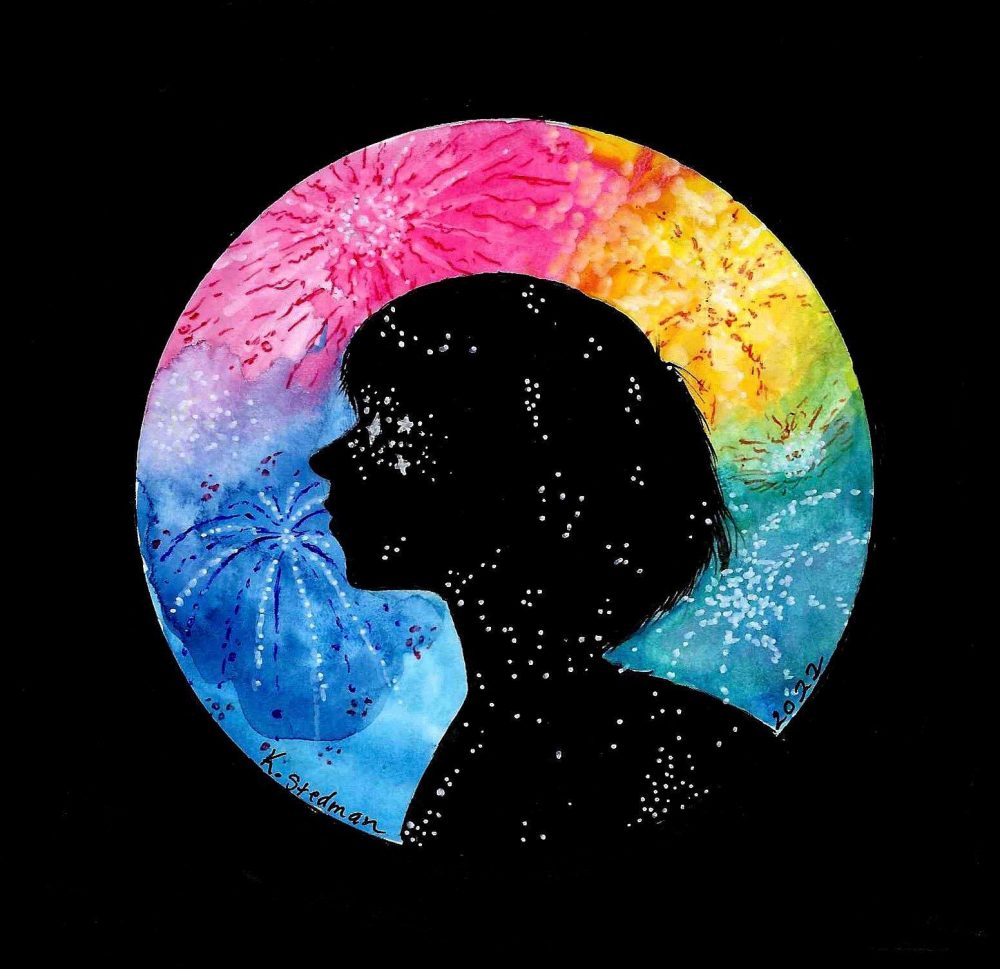 Which isn’t my real name, but it is the only name I’ll answer to.

When I was five, I lit my first match, squealing at the crackling sound it made when it ignited. My dad extinguished the flame with his pointer finger and thumb, and I cried so hard I threw up.

My father was often away on business trips that were really rehab stints for alcohol and many drugs. But he’d always bring home a firework. My grandmother hated this—hated him—but she wanted us to have a relationship. My mom wasn’t around, so I clung to his affection.

We’d tee up the rocket or roman candle in my grandma’s Florida 3-acre backyard full of crabgrass that tickled our ankles and sandspurs that flocked to our shoelaces. He’d let me light the wick and then put his arm around my shoulder after I’d run back to him.

Eventually, the “business trips” became longer until he only came home once a year, then once every two years, then not at all. Each visit he was dirtier, tanner, skinnier. But I continued the firework shows until they occurred every night.

Years later I met my husband in the lot behind my apartment. He lived two doors down—a tall lanky guy with knobs for elbows. I still held my nightly firework shows to feel close to my dad. At the end of one, my future husband emerged from the residual fog like a mystery.

“What are you celebrating?” he asked.

“Nothing to celebrate,” I said. “They remind me of who I am.”

“Allan,” he said, extending his hand.

I liked that he didn’t squint at the bright explosions or cover his ears at the deafening booms. He watched the fireworks crack open in the sky like eggs onto a frying pan, a look of hunger in his eyes.

I took him back to my apartment and when we made love, I saw impressions of red, yellow, and blue bursts on the back of my eyelids, heard blasts that shook windows.

In college, I didn’t do my firework shows, but I kept fireworks under my lifted dorm bed for comfort. One day, my athlete roommate Tricia’s basketball rolled under my bed.

“What the fuck are these?”

“You do know my name is Firework for a reason, right?”

She told our RA.

My grandmother said it was my problem to fix when I called her from outside the residence hall. Somehow, from who knows where, my father found out and called the university. In four hours, I was allowed back inside.

“Don’t let anyone try to change who you are,” he said when he called later from an unknown number, his voice shaky.

Tricia moved out because she became scared of me. So, every night, I ignited a sparkler over the sink and imagined the mini sparks were huge bursts in a black sky.

The apartment complex where I met Allan kicked me out—this happened a lot—and Allan followed me elsewhere. He didn’t have much—a handful of holey Swiss cheese looking band t-shirts and cargo shorts.

Allan and I hopped from one apartment to the next until we bought a house in Central Florida on a big lot where our neighbors were oak trees. It reminded me of where I grew up.

I wanted my father to see how much better my shows had gotten since I was a child, but I hadn’t heard from him in years.

A year after I met Allan, I saw my father for the last time. He knocked on my door, the sound weak like a dying woodpecker still trying to pound into a tree trunk.

“Firework,” he said when I opened the door. His eyes were more sockets than eyeballs, his hair, only an idea—gray, brittle—his face sagged with wrinkles trailing his skin like firework bursts. He couldn’t have been more than 50 but looked 80. His voice sounded like his larynx had gone through a cheese grater. He smelled like whiskey, cigarettes, and unwashed armpits. I knew he didn’t have long to live.

Allan grabbed him a lemonade, and my father took painful sips, like his mouth was full of papercuts. We led him outside and sat him in a foldout chair.

I proceeded with my nightly firework show, lighting my best rockets of every color, effect, sound. I ended the spectacle with a rocket that exploded into a heart. My father sat with his arms crossed, and he alternated between looking at me and the sky. I watched my show through his eyes’ reflection.

“When I die, I want my ashes inside a firework,” I told Allan, two months before our wedding.

I only said this because I imagined this is something my father never got a chance to say to me. I knew he was dead—I could feel it with every bang in my recent shows.

I went back to my grandmother’s house. She had died a few years before, so someone else lived there. I snuck into the backyard, smiling at the sandspurs pricking my ankles. I gathered dirt and placed it into a plastic bag.

That night, I poured the dirt among the black powder inside an ariel firework, imagining it was my father’s ashes because it was the closest I’d ever have to them.

Allan wrapped his arm around my shoulder as we watched the comet lift off and erupt into the sky, my father creating a beautiful show tonight, Firework.

Courtney Clute has an MFA from the University of South Florida. Her work has appeared in Passages North, Fractured Literary, Flash Frog, Emerge Literary Journal, The Lumiere Review, Flash Fiction Magazine, and more. Courtney's chapbook, The Fermi Paradox, was recently published with Alien Buddha Press. Her flash fiction has been nominated for Best Small Fictions and Best of the Net. You can find her on Twitter at @courtney_clute.