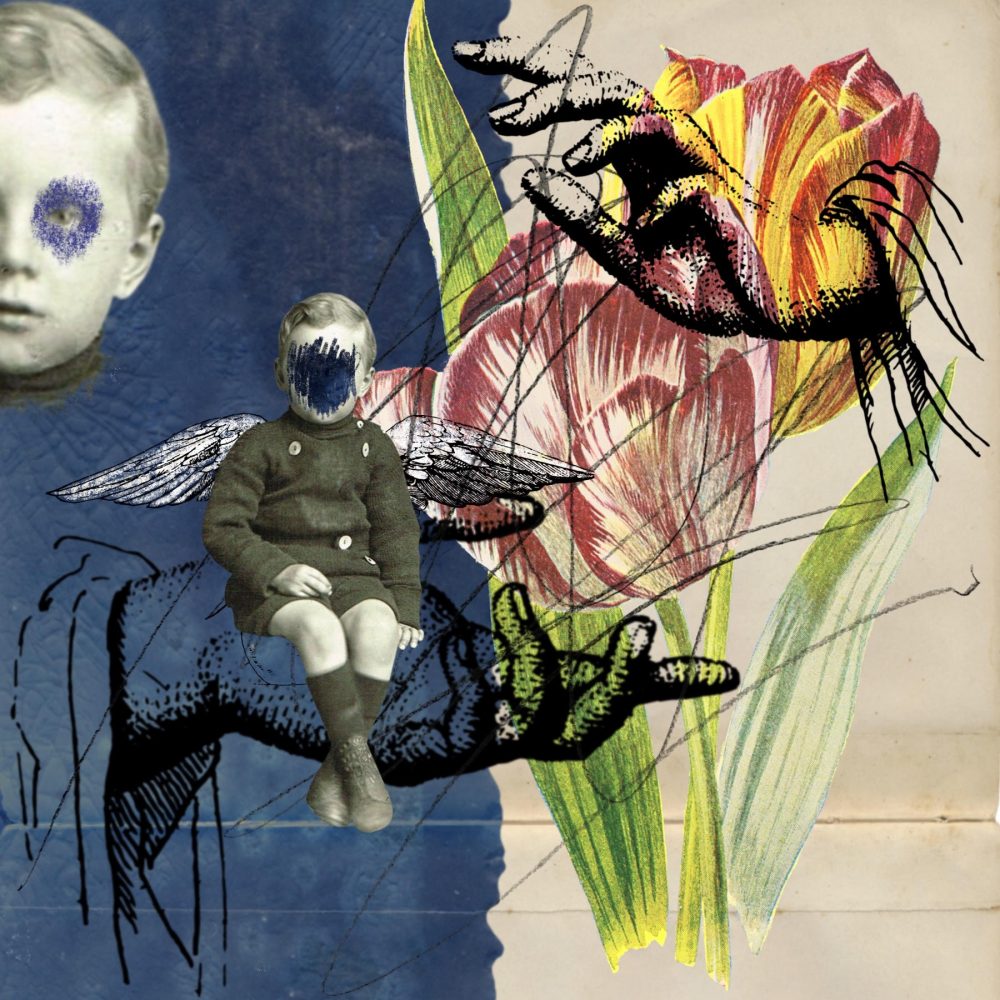 I rolled my eyes to the sky, to where angels were supposed to be. Not next to me, forcing me to share my room and toys. I looked at mum, hoping for her to tell him off for saying something so stupid, but she didn’t. She never did.

‘Well, you’ve got the hair, haven’t you?’ she said instead, tousling Jack’s golden locks. He was so perfect, so pretty, so kind to everyone. I hated him for that. At night I prayed I could get another brother instead.

And then one day in April, our garden surrounded by tulips, he found a little bird on the lawn, fallen off its nest. I told him not to touch it:

‘His mum won’t recognise him if you do,’ I said.

‘But he needs help,’ Jack replied cradling the little bird in his hands. I tried to explain it was a question of smell, but he frowned. ‘It’s got a broken wing, see?’ he said instead, and stretched out his arms, his hands holding it the way he held water from the sea to bring it to our sandcastle, that time we forgot the bucket. Another great idea of his: the water was all gone by the time he danced his way to our building site. That time too mum only smiled, and took lots of pictures of him.

Jack kept the bird like that, for a while, stroking it gently, telling it everything would be okay. I was about to go search for mum, I was sure that for once she would say I was right, there was no denying it, when the little bird looked at my brother – I swear I saw it turning its head at Jack – and then flew off, and back to its nest.

‘See? I healed the bird with my hands,’ Jack said.

I looked at him. Looked at the tree. I even climbed on top – Jack was too scared to follow me – and the bird was there, stretching its wings, beak wide open, its mother already giving it food. I scratched my head and jumped off the tree.

‘Because your big sister tells you.’

But of course, he did. He told his classmates and one of them must have told an older sibling because the next day I found my little brother sitting in a corner of the playground, his hands taped together, his nose runny, his golden locks all messed up.

‘Who did this to you?’ I asked releasing him.

‘Nobody,’ he said. Typical Jack.

I sat next to him, and cradled him just like he did with the wounded bird. I told him everything would be okay.

And then I went to look for the boy who had done this to him, calling him an angel, and tying him. I didn’t tie the boy. I punched him instead, using these very healing hands.

Based in Italy, Slawka G. Scarso has published flash and micros in numerous anthologies and magazines and has received a nomination for the Best of the Net Award in 2022 for fiction. Her debut novella in flash, All Their Favourite Stories, was commended in the 2022 Bath Novella in Flash Award and is available from Ad Hoc Fiction. She lives between Rome and Milan with her husband and her dog, Tessa. More words on Twitter as @nanopausa and www.nanopausa.com