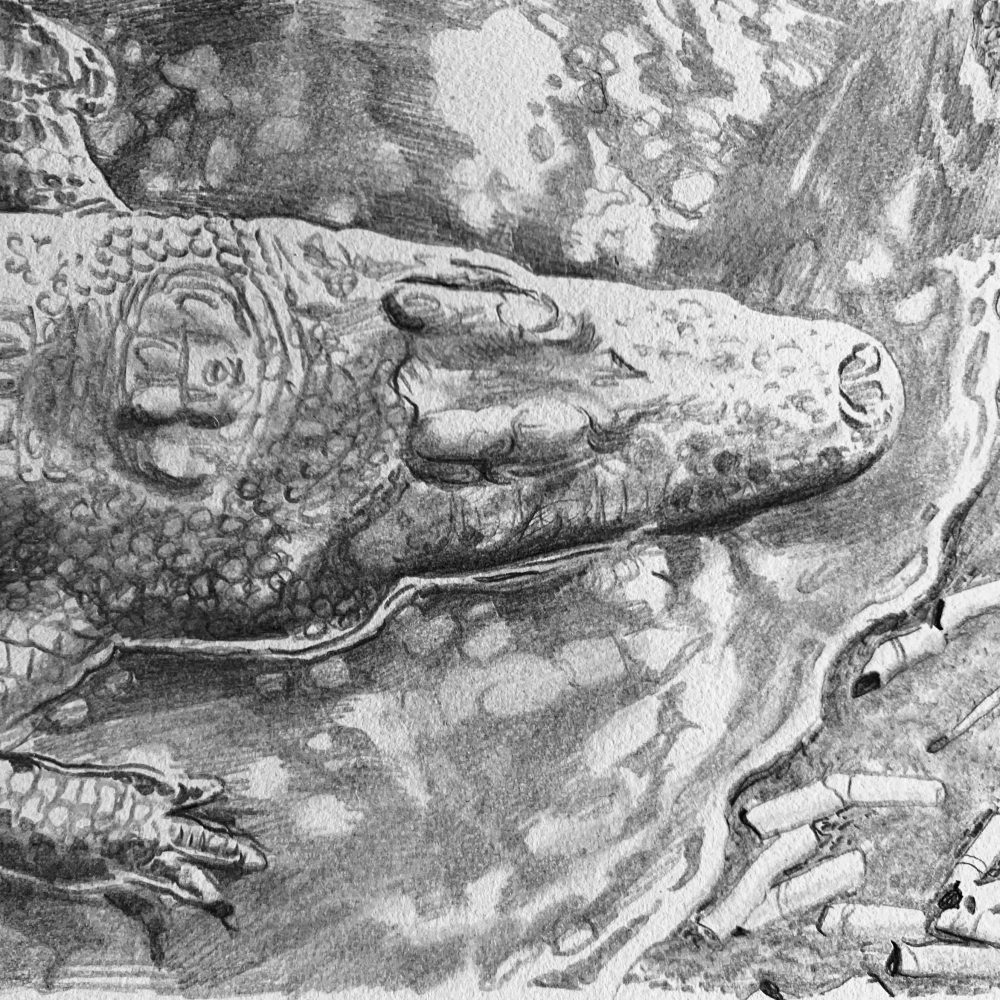 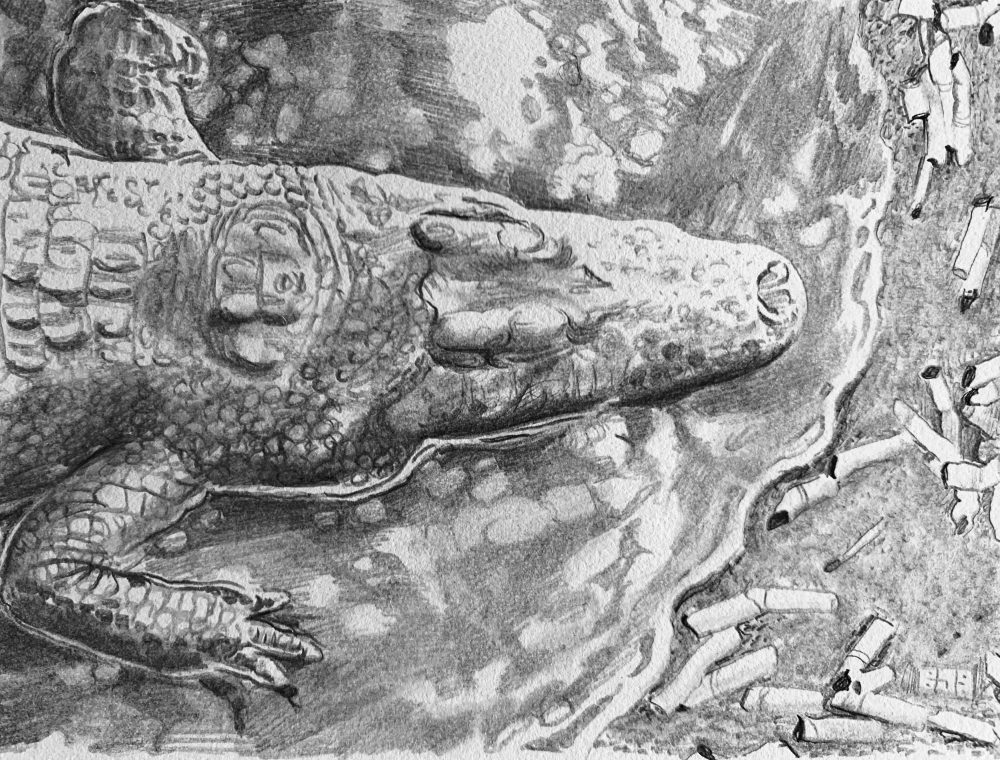 Aisha and I were driving to New Orleans. Somewhere before Picayune and 4am, we pulled off I-59, found a wooded residential road which led to the Hide-A-Way Lake Club, parked, and stared at the water. We opened the hatch, put down the back seats, made a little nest with sweaters and sleeping bags. August and boiling, I’d been driving shirtless since New Jersey, except when filling up. Aisha had a bikini under jean shorts and one of my white button-up shirts. Since arriving in America, we’d never been outside New York. I got a beer and a ginger ale from the cooler and led her by the hand down to the water. The joint I’d rolled in Atlanta, had been burning a hole in my pocket. Being a good Muslim, Aisha didn’t drink alcohol or smoke marijuana. Being a good catholic, I tried to get her to. She’d experimented with wine at my studio on Old Fulton Street but never in public. She just wanted to know how it felt, how I felt drink. She wanted to understand people who loved booze and pot like I did. Her curiosity and tolerance amplified her beauty, I’d never met a more intriguing person. We sat on a towel in the dry mud.

Think the crocodiles could be here?

Could be. You ever skinny-dip?

What is the skinny-dip?

We dipped and kissed. The sun came up. No crocs or alligators only nippy mud bugs. We towelled off and dozed arm-in-arm with the hatch open. We closed our eyes and let the miles rerun on our eyelids. The sleeping bags below felt cool. No matter when or where, Aisha always smelt of papayas, vanilla pods, a smouldering bonfire. Our foreheads rested against each other, breath synchronised, noses touched.

I heard a flashlight tapping insistence on the car window. Saw a pistol barrel. Two cops, one black, one white, on each side of the car, mouths moving, words not getting through, telling us to get out of the vehicle. Those wide brimmed ranger hats that I thought only existed in movies, those uniforms so tight, emphasis on bicep, triceps, quadricep, ripe fruits grown in an air-conditioned gym., faultlessly trimmed eyebrows, meticulously groomed moustaches—Tom of Finland would be proud. I pulled on my shirt, stood barefoot in the gravel. Aisha grabed the closest thing, her dashiki. The sun so hot, the humidity edible.

What do we got here? The white cop says to the black cop.

License, insurance, and registration. The black cop says to me.

While getting my documents slowly out of the glove box, the cops eyed Aisha. She returned their gaze with unadulterated defiance. In Abidjan, her father was a powerful man, she’d told me many times, not much else. While the black cop was looking over my documents, the white cop pointed to the ground beside the car. Some asshole had emptied an ashtray.

Non, I do not smoke.

You dump them there? The white cop said.

She doesn’t smoke, I said.

I was talking to her not you. What she can’t talk? Why don’t you pick them up?

They aren’t mine. I would never do that.

Aisha had her passport, but her student visa had expired.

We don’t want any trouble. I’ll just pick them up. No worries, I said.

You saying they’re yours, The white cop said.

I never said that. They were there before we got here.

I pulled a sandwich bag from the passenger seat floor and squatted.

If they ain’t yours, why you picking’em up?

As I said, sir. I just don’t want any trouble. I’m happy to clean up.

I want her to pick’em up.

But she didn’t put them there. Really, I don’t mind, no worries.

Aisha’s squinted. Imagine visible ear smoke, Godzilla tossing trains, A volcanic eruption. I’d seen her temper blow before. I picked up the butts faster. The white cop stepped over and put his boot on my hand.

I said stop, boy. Stand up. I want her to pick them up.

You can’t be serious.

I’m telling your bunny here to pick up those butts.

Aisha stepped over to the pile, squatted down and began picking up the butts, putting them slowly into the sandwich bag. The white cop stood above her, almost on her. Aisha hated cigarettes. I couldn’t look.

On your hands and knees, Missy.

Aisha looked up from her squat to face the white cop. He took off his sunglasses.

I said on your hands and knees, Missy.

Yes, I can and I am. Your little love bunny better do what I’m asking.

Aisha sucked her teeth then put her palm flat into the gravel beside the butts. She returned to picking, the white cop took a few steps back to admire the view. A bead of sweat ran down my jawbone. The Black cop returned, handed back the documents. He watched his partner watch Aisha.

Ma’am, we’re sorry to bother you. We’ll be going now. Enjoy your visit to America.

Aisha looked up at the black cop and smiled. The black cop examined my taillights, kicked a tire.

The cops drove away. Aisha walked down to the water. She stood with her ankles underwater. I followed her, stood silently beside her.

Yes, there are many the crocodiles here.

Could be, you never know.

No, I know, there are many crocodiles here.

All men are the same.

She said looking at the swamp then bent down to wash her hands.

David Morgan O'Connor is from a small village on Lake Huron. After many nomadic years, he is based in Albuquerque, where an MFA and short story collection progresses. His writing has appeared in Barcelona Metropolitan, Across the Margin, Headland, LimeHawk, Origin Journal, Cecile's Writers, Bohemia, Beechwood, Fiction Magazine, After the Pause, The Great American Lit Mag (Pushcart nomination), The New Quarterly and The Guardian. Tweeting @dmoconnorwrites http://davidmorganoconnor.com/