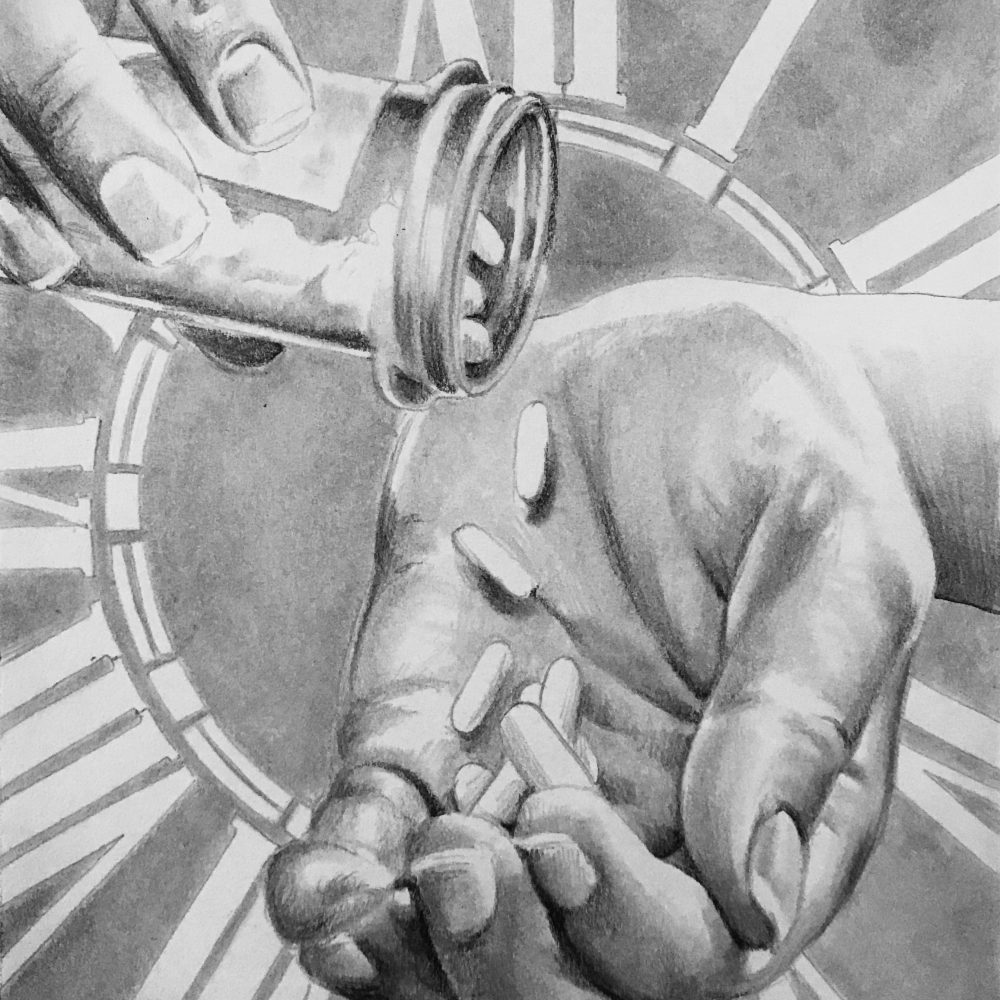 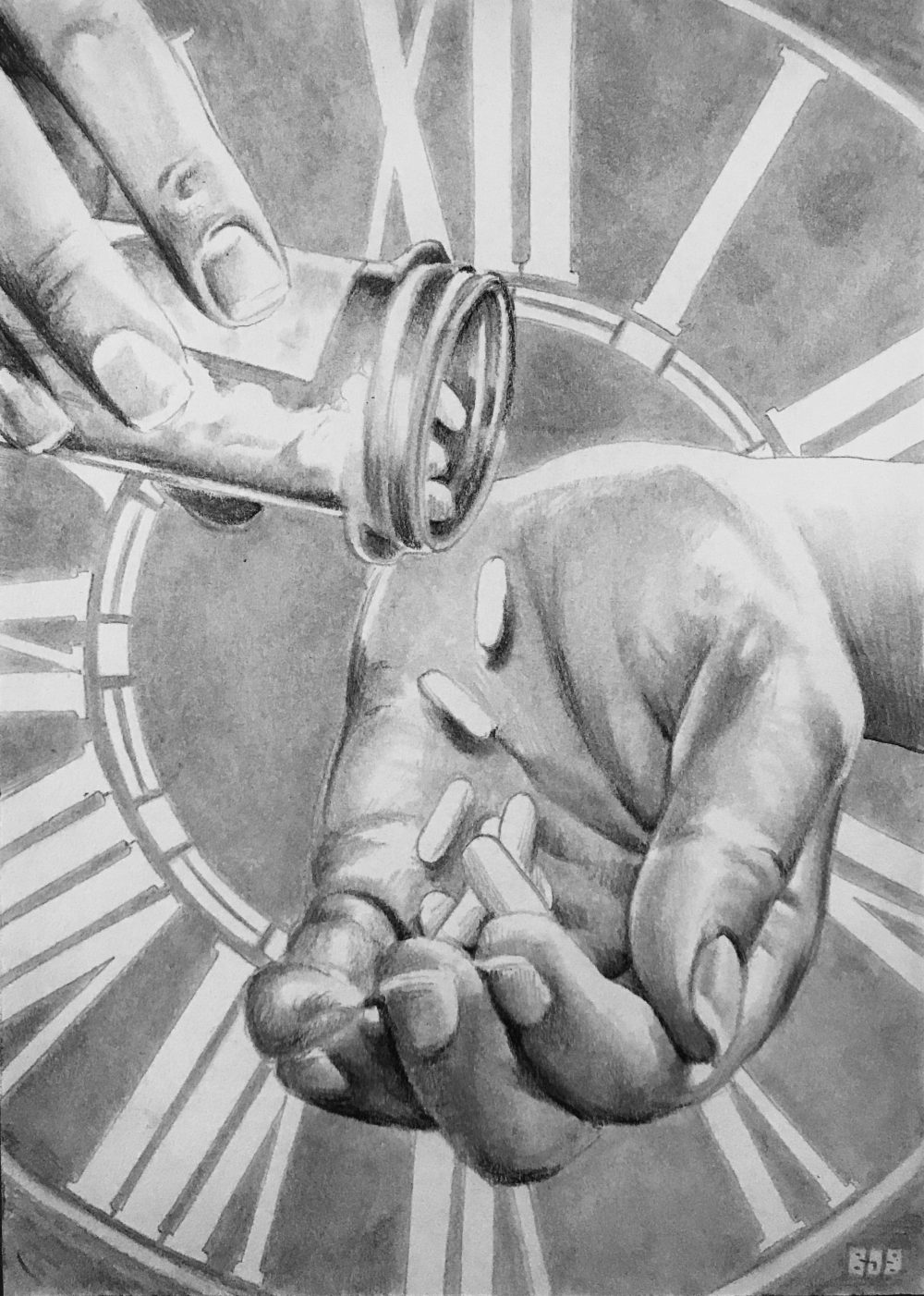 Instead of an urn, she has a bottle of Xanax with his name on it. She places the bottle on the pillow next to her. She laughs. It’s like he’s there. She needs him closer. Close as he can get. She needs him inside.

She reaches for the bottle. She starts with four, washing them down with what Absinthe she has left.

She can feel and see it now—the way he looked at her, the way he touched her face—

how a blind musician might stroke his violin and for the first time, see. He made her…more. In that moment, she became.

“Liz,” he whispered, half singing in her ear. “Let’s live forever tonight.”

She first experienced him in the audience at his show. She doesn’t know if it’s the Xanax taking hold, but she can’t remember why she was in Chicago. Maybe no reason. Twenty-two years old, maybe, college degree, no job and as far as a job—well, money didn’t matter until it mattered…

She witnessed him on stage. She watched the manic roar of a laugh erupt from his chest—his curls in freefall, his head cocked back, his eyes sublime pockets of light caught from above, illuminating something only he could see. Something that had chosen to reveal itself that night in the rafters of a rundown comedy club in Chicago.

She didn’t know it then, but his parents had driven to Chicago to see him perform. They were supposed to be in the audience that night. They weren’t. They never showed.

Pill eight. Ten?  Her fingers shake. The way they shook when she played with his hair, weaving it in and out, flicking a black curl here and there as they tumbled over themselves. Slinkies.  She wanted him then how she wants him now, inside her. Fill her up.

She laughs. Only he could write a smart-ass suicide note on a red post-it note reeking of alcohol. “It wasn’t you. It was me.”  It made no sense. This was the only explanation and she hated him for it. Her heart isn’t broken. It’s crooked.

She likes to think she had loved him straight, but he had loved her crooked, from the heart. His heart was crooked in the wrong places, but for the right reasons borne from a crooked past.

“Overdose,” was the doctor’s explanation. “His heart gave out.” What he ingested that night was a melting pot of Xanax, cocaine, and God only knows how much alcohol. The police hadn’t found the Xanax bottle. She had taken it when she found him. She doesn’t know why exactly.

She looks at what used to be a grandfather clock, now a black steering wheel melting into the wall. He isn’t here now because of the other half of the bottle consumed that night. His other half by the end of the night would be inside of her. Her body tingles. Maybe it’s him.

She’s no longer in a taxi. She’s back on her bed naked, alone, beneath the sad golden sheets.

She laughs. A terrific snort, one he helped her perfect over the years from laughing at him, violates the heavy air. She mumbles the doctor’s words aloud. “His heart gave out.”

“It gave up!” Her slurs take flight, crashing into the air as wails.  “His heart gave up.” This was the only explanation.

He would rather die naïve than live cynical. That’s what he used to say. It didn’t make much sense to her but that was his style. That’s what he told people and that’s what she used to tell herself.  It sounded beautiful but like all things beautiful, it was part lie.

She lifts pill nineteen from the bottle and inspects it though she were a curious deity intervening. She strokes the chalky white bar. The clock strikes seven. She tosses it in the back of her liquor-laced throat. Swallows.

She flips the bottle upside down in one violent downswing.

No matter. She’s the lifeguard here. She reaches out, snatches up the rest, and opens her mouth wide.

…They’re drowning in her pool of Absinthe and saliva.

She sees Ryan slumped over the steering wheel of his red KIA, his hair greasy, curls drooping—limp—like the rest of him.

Her stomach conspires with her mouth—she nearly vomits.  She worried this might happen.

She rises only to teeter, but someone—maybe God—yells timber! She sees Ryan’s face in the clock now. He’s laughing.  The clock chimes, wagging its hungry tail.

“Let’s die forever tonight, Ryan,” she says. She swallows the last of him.

The cynical clock looks on.

Kari Gremore is a short story writer as well as a comedy writer. She worked as an assistant for a comedian after completing her internship for Conan O'Brien's show in LA. One of her short stories was adapted into a short screenplay, which placed in three contests, including the Beverly Hills Film Festival. It won first prize at the Eerie Horror Film Festival. She majored in Creative Writing at Albion College. She currently reads for the Iowa Review.