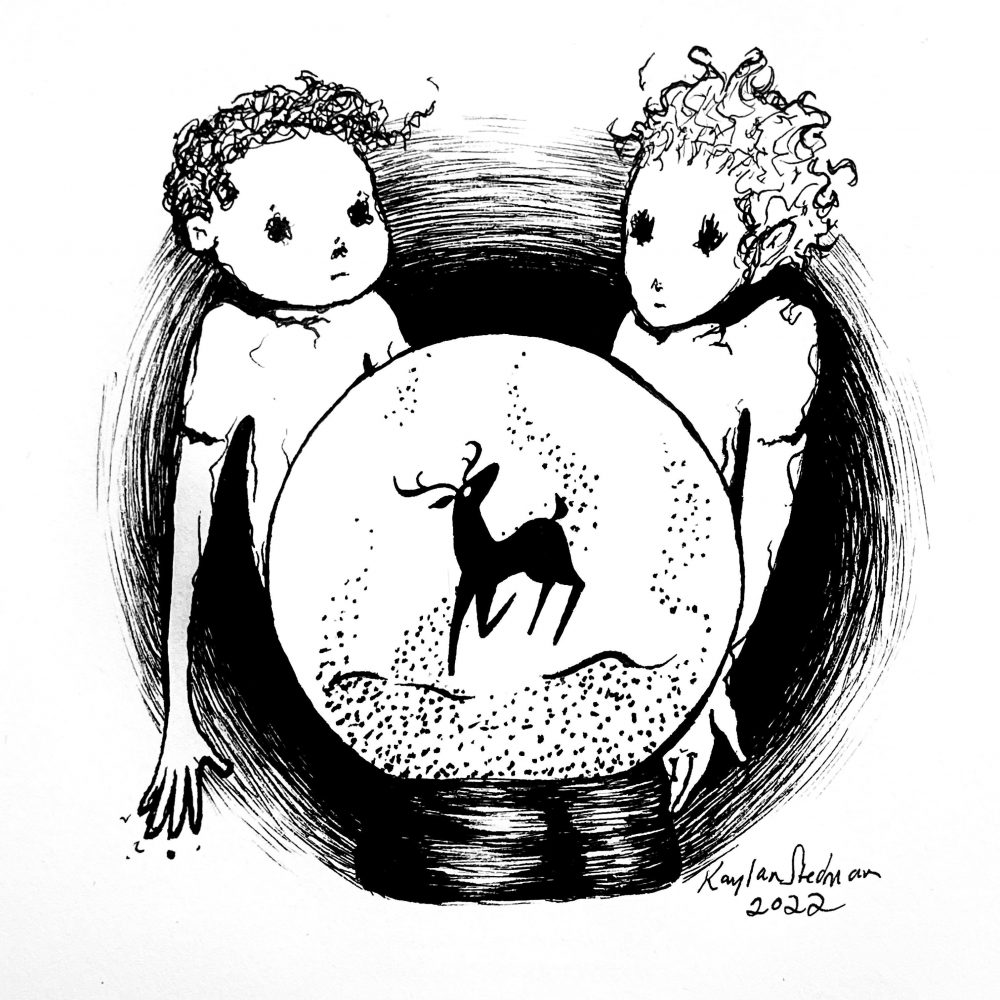 The boys stole. They stole sunglasses and Alfred E. Neuman tee shirts from the thrift store, a half-broke umbrella to twirl on the playground. Everyone made fun of them but what did they care? They stole malt balls from the penny candy jar at Roma Jane’s and the coin purse their teacher kept in her desk and Robbie LeBlanc’s coveted X-ray specs.

They were cagey and bored and unloved.

On the playground the Little One told fortunes for a quarter, employing a crystal ball that was just his mom’s snow globe with a leaping deer inside it. The Little One prognosticated and the Big One collected the money and in this way, and for only a while, the two enjoyed some social currency. If you wound up the key on the side of the snow globe it played a plinky version of Silver Bells, which they did when business was slow. One day the Big One requested his own fortune told. He even gave the Little One a quarter to show he was serious. The Little One curled his fingers around the cold glass and peering into it, said, Today you shall enter another realm. It felt right. The Big One couldn’t wait.

The way he remembers it, the principal flat out said, Your parents have been murdered, but it couldn’t have happened that way. Anyway they were dead. A woman from social services came and got him and dropped him off at a new house with a basketball hoop and a sister.

On his first day at his new school, the teacher announced to the class that he was an Orphan and should be Treated Special and the kids hoisted him up on their shoulders and paraded him around the room, and for a long time he could still see them all smiling up at him, but it couldn’t have happened that way.

Years later when the world was changed and exactly the same, the Big One collapsed in line at the post office. As he fell, he was a young man again, then a teenager, then ten going on nine, rushing to greet the thing he’d always known was coming. The Little One was there in his What, Me Worry? tee shirt. He shook the snow globe and twisted the key and together they watched the glitter settle on the leaping deer’s shoulders. He heard shouting over the plinking notes of Silver Bells, saw snowflakes behind his eyelids. It was all so much faster than he imagined, and so easy.

Kathy Fish’s short stories, flash fiction, and prose poems have recently appeared in Ploughshares, Washington Square Review, Waxwing Magazine, Copper Nickel, The Norton Reader, and Best Small Fictions. Her fifth collection, Wild Life: Collected Works from 2003-2018, is now in its 2nd print run with Matter Press. She is a recipient of the Copper Nickel Editor’s Prize and a 2020 Ragdale Foundation Fellowship. Her highly sought after Fast Flash workshops, begun in 2015, have resulted in numerous publications and awards for the hundreds of writers who have taken part. She publishes a free monthly newsletter, The Art of Flash Fiction, which includes craft articles and writing prompts. She is currently seeking representation for her craft book of the same name.