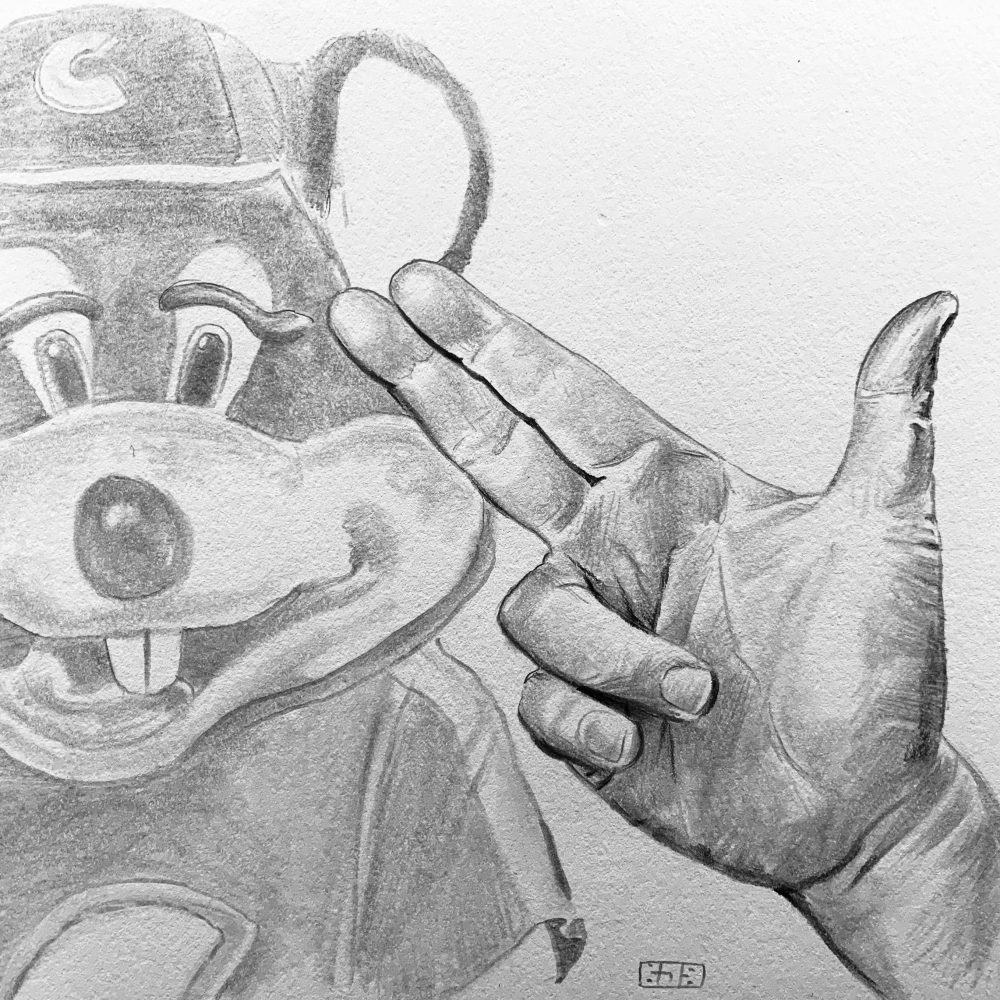 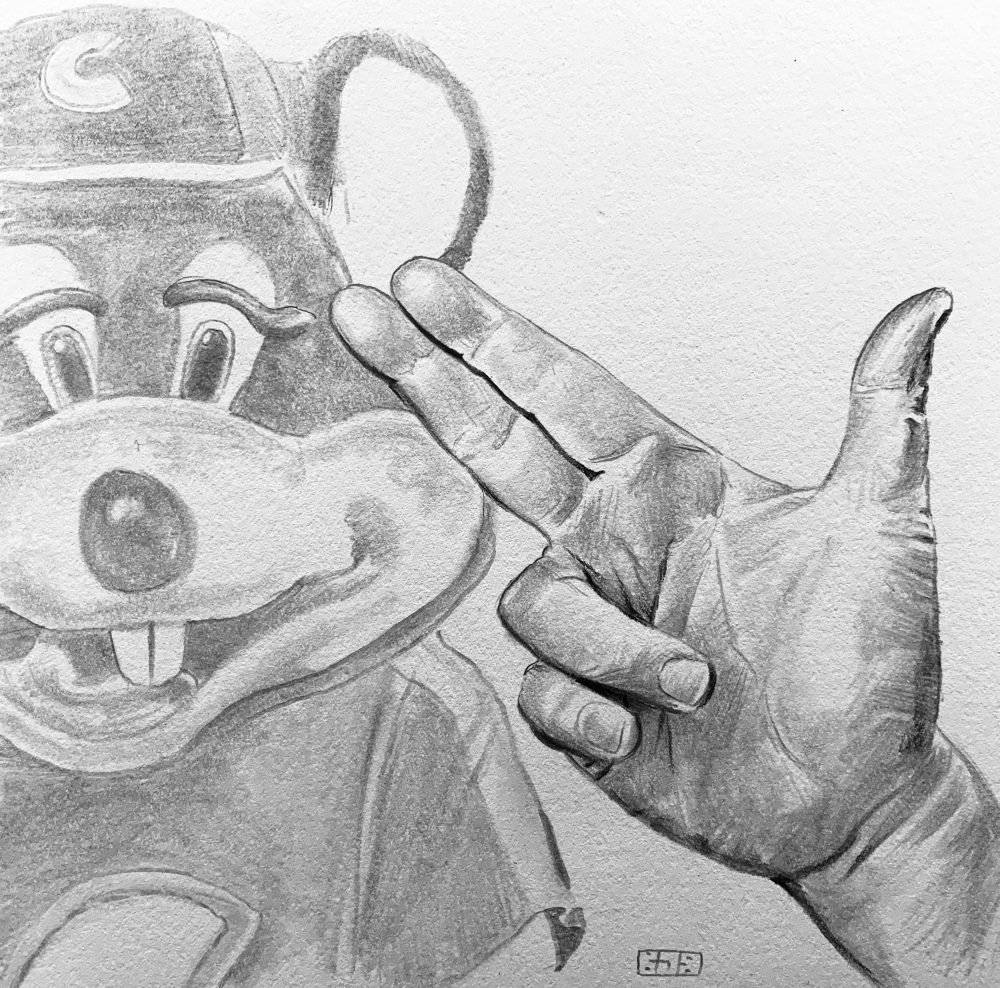 When Erica breaks up with him, Danny cries at the Chuck-E-Cheese table. His sister and mother knot around him. Mom massages his shoulders. Lily snaps a party hat on his head. It’s her birthday. A small pizza smolders on the table, uneaten. Erica sent the text as a dead-faced girl dropped the pie down, splashing syrupy sauce on the gold watch Erica’s family bought him.

Everyone fidgets. Mom’s fingers ache from massaging his shoulder. She kisses his cheek, then takes Lily’s hand and leads her into the arcade battleground. Lily jingles a big bag of coins Mom scrounged change to buy, pennies counted out in little towers on the greasy counter. Now, Lily roams the wonderland, drinking in the magic—dinosaur ride, bedazzle of lights, skiballs licking up the lanes. She doesn’t see the pink vomit jellyfish’d behind the Kill-the-Clown. The worker stuffing forgotten tongues of tickets in his pockets.

Danny loads up her Instagram—not Erica’s, her mom’s. Her page flares. Filtered photos flow by of him and Erica and her family yacht-browsing in the Bahamas, spooning shark fin soup atop China skyscrapers. The weekend trip to Fiji. Danny splashing Erica’s sad siblings at a restaurant pool cresting an electric blue ocean. Family volleyball (off Instagram: her Dad lining up cocaine in the bathroom when they beat the others, whispered, This is the feeling of God). The golden sun slotting the horizon like a gigantic coin. Perfect smiles from their whitenings, Danny included. In every photo, he felt linked to them through the teeth. They had peeled back the mottled skin of the world and showed him the ivory bone. They’d just returned; he’d driven over from the airport to make Lily’s party. Erica probably sent him the break-up text with sand still gritted between her toes.

The worst part of her family was her. How she made him stay at the hotel, us time, when everyone else was going manta-ray snorkeling or submarine plunging. He wondered of the Special Reserve caviar’s umami when she dragged him along the beach, the breathtaking helicopter views grounded while they talked, the great beauties sold forever while they had sex.

He hears Lily’s laughter from far away. She and Mom see-saw on the racing game motorcycles. But what do they have? Lily’s patchwork dress. Mom’s Goodwill tennis shoes. How she snuck an old foam cup in for free soda. Stuffed parmesan packets in her purse.

Danny wipes away tears and pushes into the arcade dazzle. Here, families own the world. Spin and win, drool dripping at the jackpots. Kids foam at the prize counter, hold up cards loaded with tickets, scream like boiling tea kettles at the cashier, teeth gnashing, pupils ballooned big for the stuffed sharks speared to the wall, the gummy Krabby Patties’ buzzy high.

Past Lily—she smiles when he approaches, the gap in her front teeth gaping, and reaches for his hand, but he blows past her—a plastic play place towers ahead like a fantasy castle. He crawls inside, over a gnawed pizza slice mushed to the tube’s mat floor. Squeezes upward. Two kids wage war with foam swords in the ball-pit. One smacks Danny on the face. He tells them he’s the king and they drop their weapons and say, “Sorry, m’lord,” then sink down until the balls submerge them. Their sugar-wide eyes are the last to disappear. The castle top is bubbled with a watchtower, plastic window surface smudged and cracked, but from it he can see everything—the arcade’s disco ball glitter, the Chuck-E-Cheese mascot roaming through tables of cheering kids like a messiah. Here Danny will stay. He sits down. Below, Lily and Mom stand in the arcade. Watch him. Lily cries. His mom wipes her tears.

A little boy climbs into Danny’s watchtower. He says, “This place smells like dog shit.”

Danny is unsure what to make of that, thinks it smells fine, good, even. He wishes the boy would leave but he sits down next to Danny instead. Lily and Mom roam the games, splatter digital zombies with neon guns, win the jackpot at Flappy Fish. They cut Lily’s cake and Lily blows out the candles with different tears in her eyes. Mom’s chipped nails squeeze Lily so tightly she should shatter, and her mouth moves through the familiar prayer she always says for family: “Health, gratitude, strong and endless laughter.”

Danny’s phone buzzes. Keep the watch. Erica’s dad unfriended him. So has Erica, her mom, her siblings. For a moment, he can see the future. They’re on their tenth Fiji trip. The shark-fin’s too salty. He falls asleep on the helicopter. Feels relieved when they go submarining without him. He and Erica dip their feet in the freezing sea. Flip a beached shark back into the ocean as the water churns diamond-bright, like Lily’s smile. When Danny sees her standing in line at the prize counter, he blurts to the boy, “Which one’s your family?”

The boy draws his finger across his throat and sticks his tongue out. “I’m in foster care.”

Danny realizes his ass is wet. He’s been sitting in piss. He looks out, and for the first time, sees that half the arcade games gap black and dead among the others. Sees the children stabbing the Chuck-E-Cheese mascot with forks and knives, smearing it bloody with pizza sauce. Sees the trash strewn among threadbare feet. Sees his family walking toward the exit, Lily clenching a giant stuffed shark, eyes fixed on the prize counter even as she leaves.

Danny takes off his hat, and the watch, and sets them in the piss.

The boy slips the watch over his wrist. “Where’s your family?” he asks.

The boy forms a fake gun with his fingers. Aims it at them. “Pew,” he says, shooting them as they walk out the door, the too-big watch slipping down his wrist when he fires.

Nathaniel Buckingham is an Arizona student and writer. His work has been published in Maudlin House, Red Rock Review, Rust+Moth, and Exposition Review, among others. His work tends to dissect bisexuality, neurodiversity, polyamory, and the horrors of capitalism. He is the co-founder of Ember Chasm Review and previously a reader for CARVE.