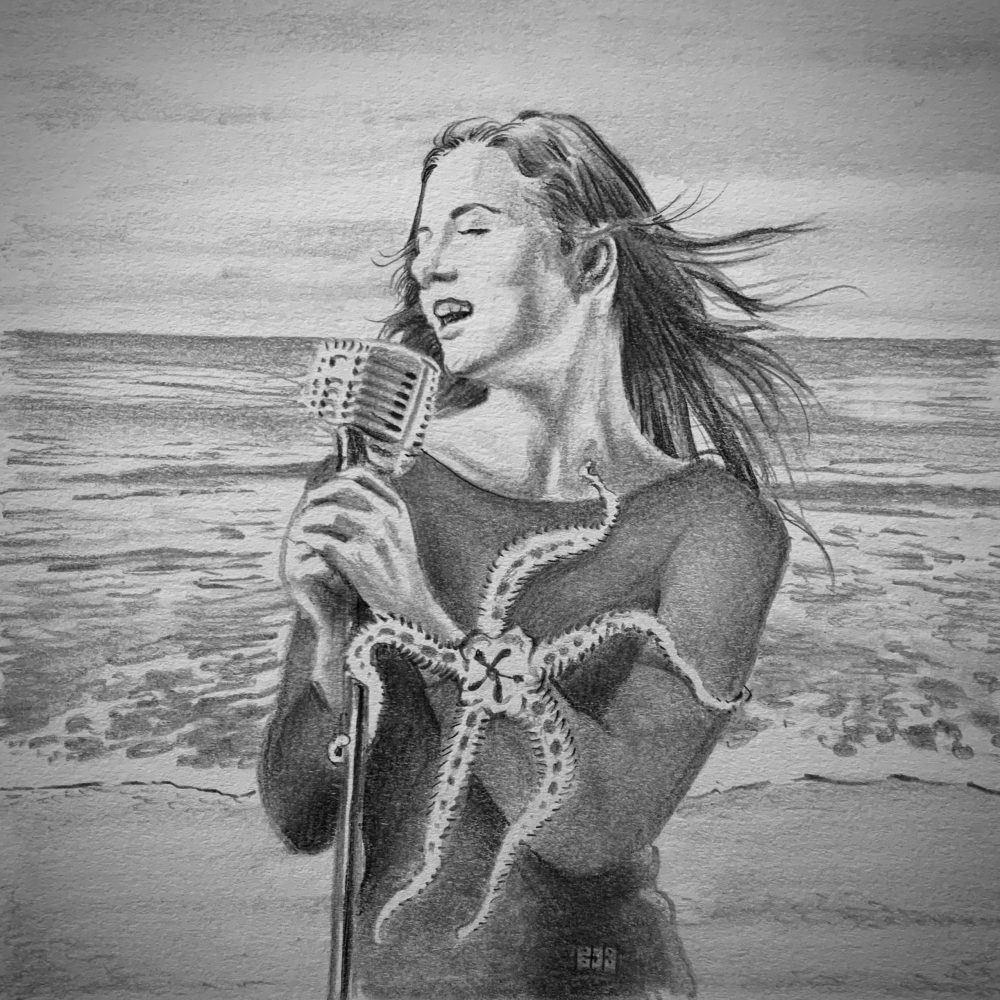 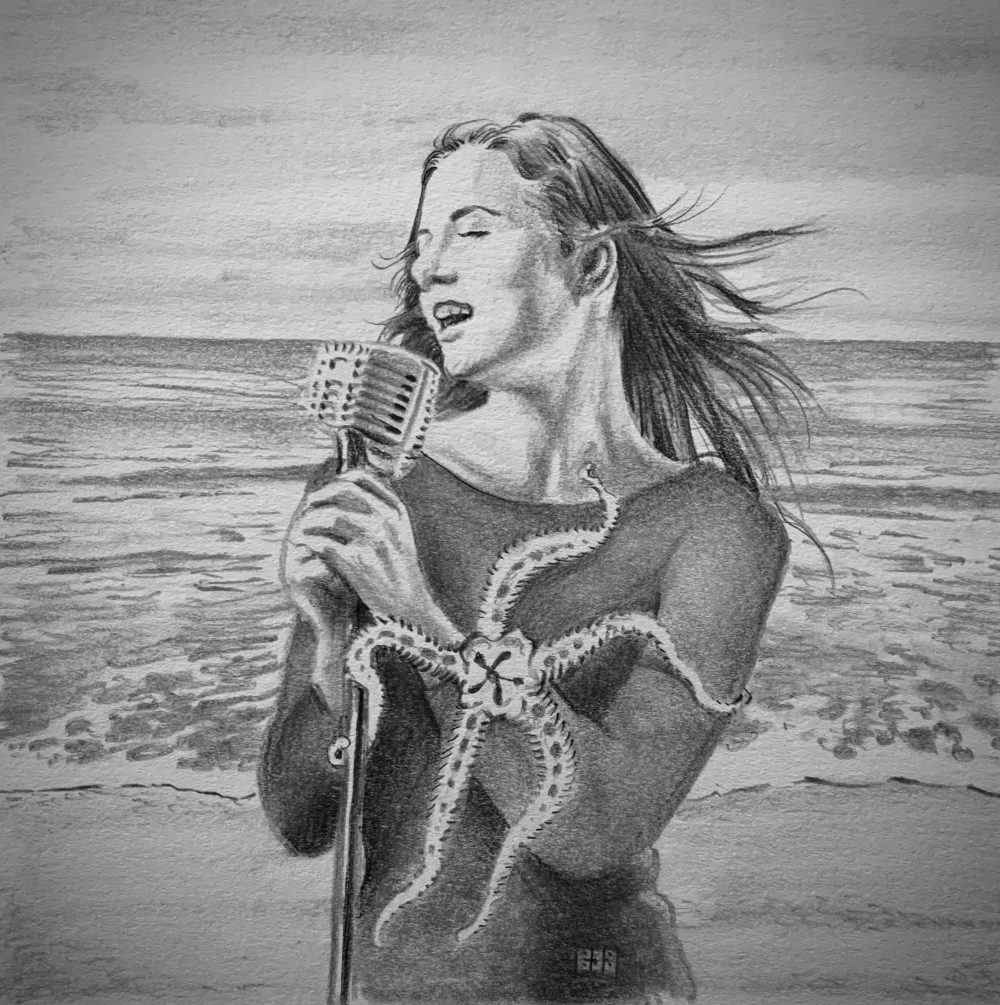 The brittle stars, in stop-motion, edge closer. My body is too wasted to move. The sea laps at my feet and my cheek is pressed into the beach’s wet sand, legs ensnarled in seaweed. The ghost of salt water stings my nostrils, burns my throat.

I wanted to be a part of the choir. When Sean told me they’d have no need for my ratty-haired slut self, I thought, I’d show him. I rarely saw my brother and no matter how often I showed him things, he always claimed a special kind of blindness. In this way, I was mostly invisible.

The auditions were at four and I’d have to leave work for it. Stan would have none of it and besides in addition to being my boss, he’s my uncle. If I told him, he would tell my ma and she said choirs are for young boys and fairies. I pictured myself as a little fairy, flitting about near the hearth and out on the moors and around the forest edge. Instead, I worked at a soap shop and I was the daughter of a single mother who kept a tavern at the edge of the world. An edge that felt like a knife that sharpened when I walked along it, which I did often.

At work, I begged lady troubles, locked the bathroom door and pulled myself through the window. Misty rain settled onto the peninsula, which was the usual state of things. The tide was high, washing out the road in frothy increments. Drinkers headed out for happy hour and I was sure I was headed to my future.

A hollow sound like a voice filled the air. Tree branches danced to the disembodied song and white crests smashed the rocks in a pattern known only to itself. The voice, I told myself, was just the wind.

I rubbed my wrists where Sean had twisted and turned the night before. You really want it, don’t ya sis?, he’d said snatching my arm. When I threatened to yell, he twisted the skin until it burned and he said, like this? You like this? This is what all the boys say you like. I wanted to find out myself.

I stretched toward the door and away from my brother’s reach. He was ten years my senior, my half-brother really. He lived in the city and visited intermittently. He and his girlfriend Pam were rumored to marry within the year. Rumored that they were two lovebirds and raucous Sean had finally settled down. I knew enough not to believe rumors.

He yanked and my body snapped back. “Like this?” he said, suddenly gentle, rubbing – caressing.

The foghorn had blared and in that moment, I freed myself, clamoring from the room, out of the house, and into the bisque-like air. Sean was fast on my heels, but I easily lost him a few meters into the forest.

At the base of a tree overlooking the ocean, I sang, quietly at first and when I was sure Sean was gone, louder. The flute sound of the wind on the cliffs picked up and it was not long before the deep music harmonized with me and it was then that I knew it was the voice of the sirens. The alarm song. The danger is near song. The join us song.

And so, the next day I walked to the choir audition. The voices returned and guided me, warmed me, enabled me to move forward. I carefully stepped through the water along the quickly disappearing road, turning inland. The approach to the village was steep and I made my way down the hill cautiously.

When I arrived, the judges were gathering their papers, coats, and umbrellas, talking about the weather. One shook their head at me as I entered, pushing slick hair off my face.

It was ten minutes before the auditions were supposed to end. I had time. I shimmied off my jacket and let it clatter to the floor with its collection of enamel pins and zippers. While I want to say I took the stage, stashing it in my pocket, taking it with me to pull out any time I wanted, I trudged up the three steps and practically tiptoed to the microphone. I didn’t take the stage; I didn’t own it. I didn’t even belong there.

“We’ve filled the spots,” one said.

“But I still have time.”

“Sorry,” he said and squinted. “Isn’t it your ma that runs the tavern? Your da was…”

“He was,” I confirmed. The man looked down at his tasseled loafers. “He was,” I said again, louder, into the mic.

“Go on then. Haven’t got all day.” They balanced on the edges of their seats, papers in hand, coats on, happy to imply I was keeping them from something important.

I clutched my wrist, which still burned. I adjusted the mic. Someone coughed. In the not-so-far-distance, the foghorn bellowed.

Taking my cue, I opened my mouth and out came an exhalation of relief and an inhalation of something else. Something wild and pungent with regret. What was expunged from my gut and my throat were gallons of seawater. Out came sea urchins and silky fingered anemones, kelp in slippery strands, entire Atlantises spewed forward, a choir of their drowned singing, remember me.

I awoke here on the beach, that tenuous space that isn’t land and isn’t sea and is also both.

The brittle star stalks towards me, extending an arm. It says, “the sirens were ready for you.”

I lift my face off the wet sand. Feel the suck that wants to pull me back. Wet whips of hair suction to my forehead and neck. The fog, I noticed has dissipated. I pull myself to sit.

“For now,” it says, “you have all this” and the star waves its skinny arm around to the sky, to the sea.