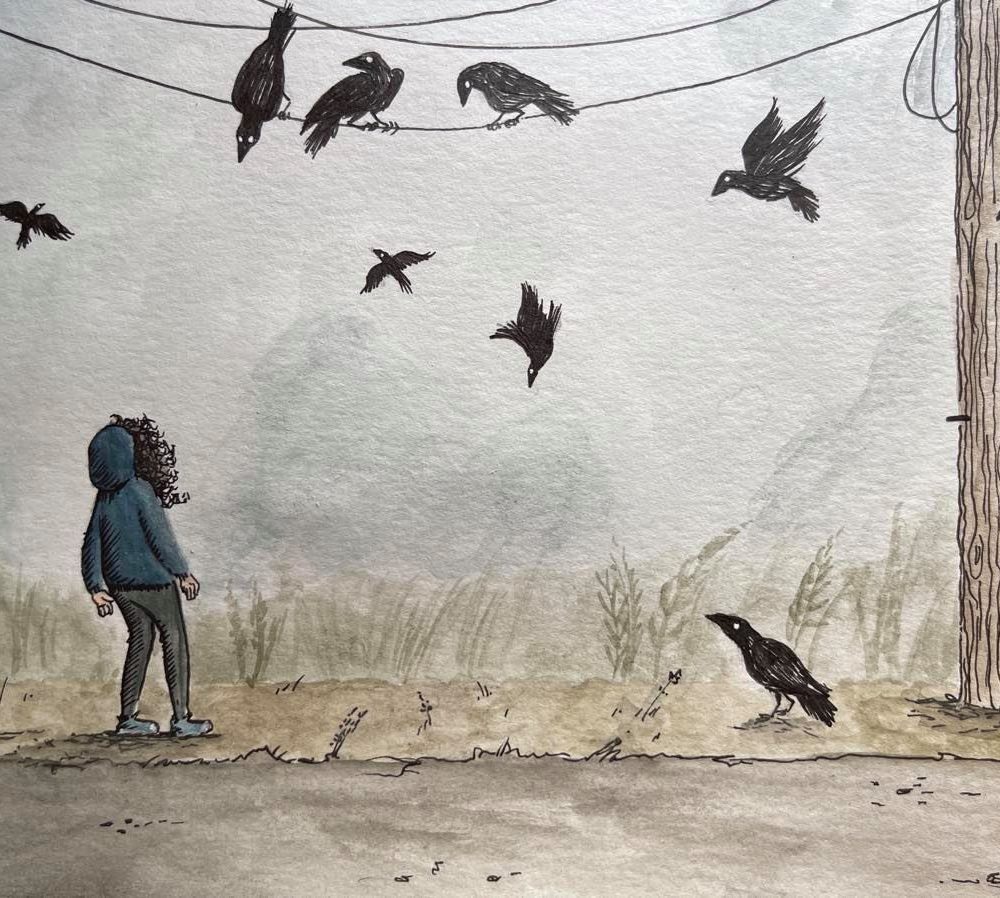 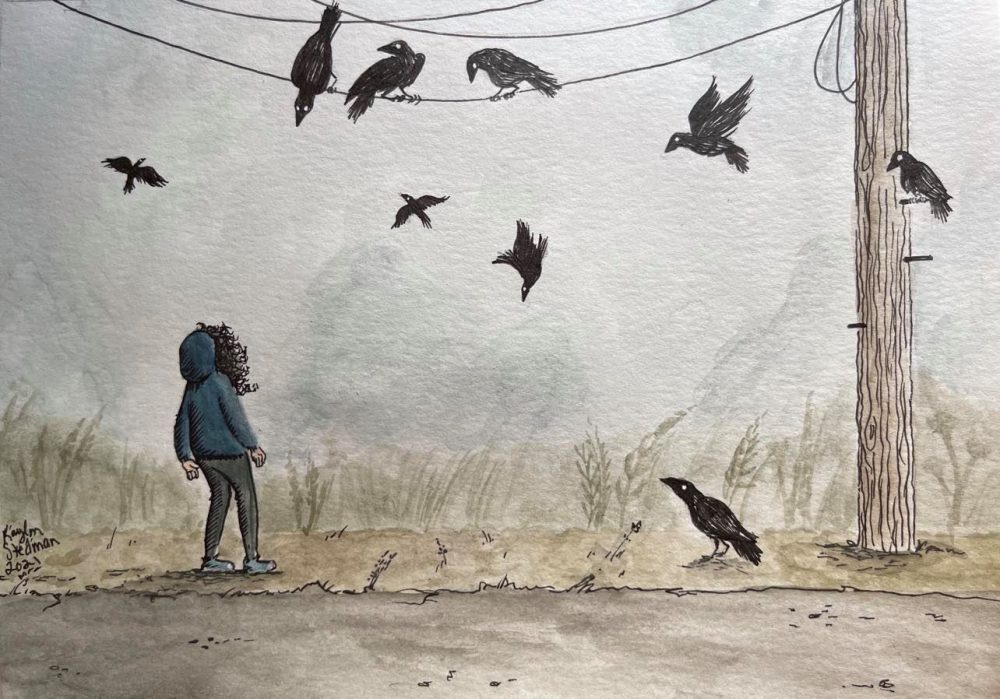 My mother crossed herself every time she saw a crow. Crows bring death on black wings, she said. I don’t know if these two in the road are bringing death, but they’re pecking at it. A liver-colored smear my stomach tells me not to look at too closely.

One for sorrow, two for joy …

There’s that rhyme about crows. Or is it ravens, or magpies? Something from an Agatha Christie novel? I can’t remember.

I don’t need to remember. I need to keep walking. Either the bus was early and I missed it, or it’s broken down. I can’t wait. Buses here are few and far apart, but bosses won’t take a late bus as an excuse. So I walk. Straight shot down Highway 17 as rain turns to thunderstorm, as my water-heavy hoodie blows off my head, my unruly hair whipping in the wind. Two miles out of town to the strip mall plaza with the Super Wal-Mart and the Super Stop & Shop and all the less-than-super satellite stores in various stages of closure, from the happy-faced SEE YOU ON THE OTHER SIDE! to the blunt SPACE FOR RENT. I should have worn a raincoat. Should have worn boots. Should have left you much sooner than I did.

Falling in love is like buying an abandoned property you think you can rebuild. You think you can turn those sagging walls into your dream house. Good bones, you tell yourself. Was that how it was for you?

I remember the Christmas you tried to fix my hair. The new drier, the iron, the suite of products some lucky-day saleslady must have found for you. Maybe she was who you wanted me to be. Silky smooth, not a knot in sight. No frizz. Straight as an Iowa sky.

The crows are following me, or these are new crows. More of them, perching on a wire, shoulders hunched against the rain. Are they bad-luck crows? Worse luck than pink bills, than Wednesday afternoon food pantry lines?

Three for a girl, four for a boy.

All of this will be a story I’ll tell, someday. A story a mother tells a daughter, about hard times and getting through without losing yourself. A story my mother should have told me.

A car approaches, slows to a drag. Black BMW, shiny like it gets washed whether it rains or not. I can feel the driver calculating, sizing up parts. Which are still good, which have seen too many miles. I don’t tuck my head down. I don’t look away. I stare him down, wet poodle hair, five months’ baby bump and all. I look at him hard, the way I should have looked at you.

More crows land. Five, six. Seven for a secret, never to be told.

The car speeds up. I watch until it’s gone, and keep walking. I hold my secrets close. My feet are tired, but they can get me where I need to go.

Kathryn Kulpa was a winner of the Vella Chapbook Contest for her chapbook Girls on Film. She is a flash fiction editor at Cleaver magazine and has stories in New World Writing, Milk Candy Review, Wigleaf, and Cease, Cows. Her work was chosen for Best Microfiction 2020 and 2021.