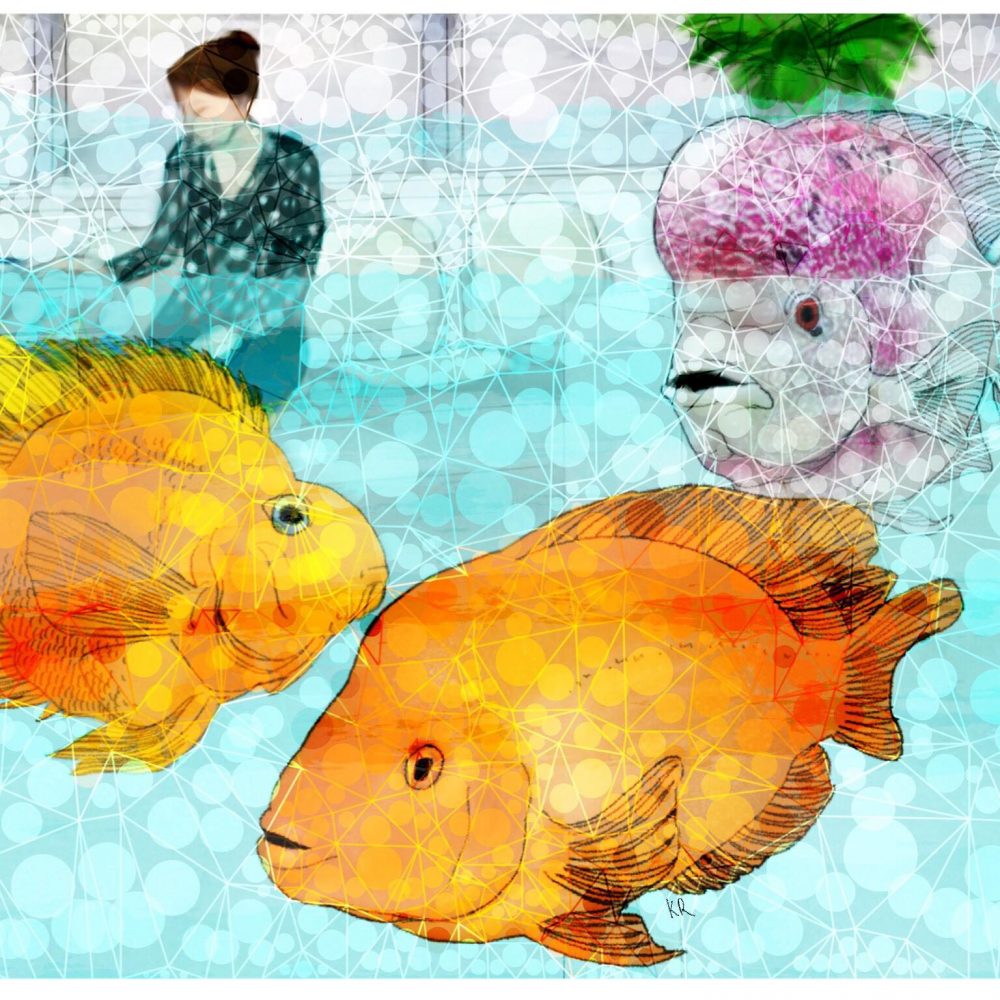 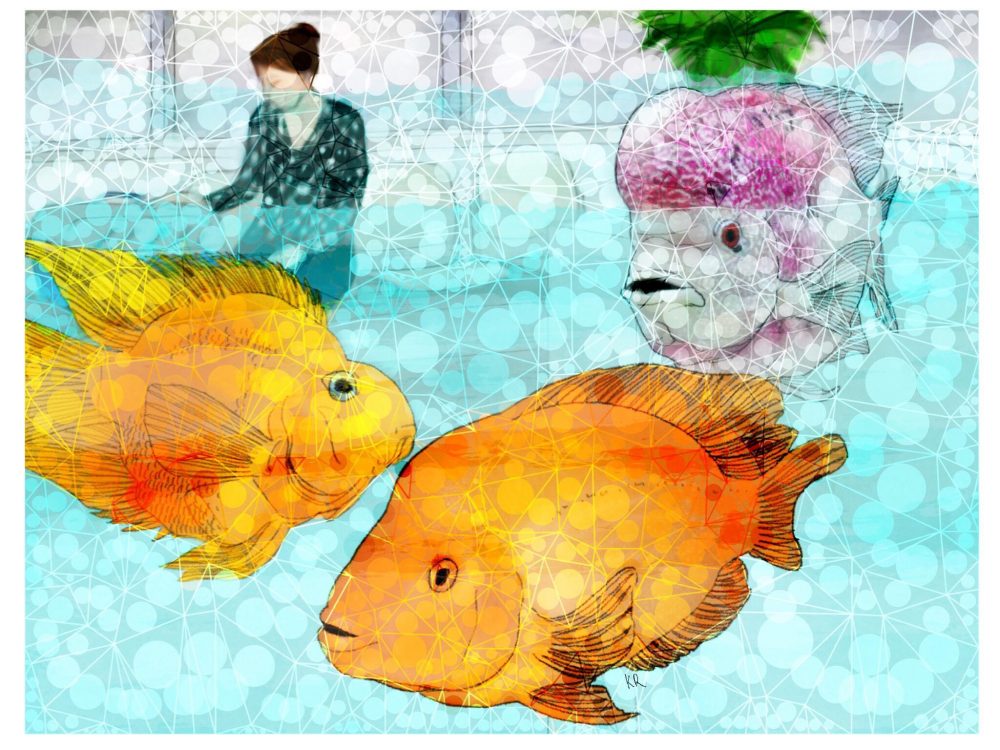 They swim back and forth, forth and back.

A tiny leak at the bottom of the tank where the caulk, dried and cracked, has loosened from the glass, drips down the back of the stand where the tank lives to calm the almost hairless primates, who wait with creatures they own to see the all in one dentist, doctor, euthanizer.

A gold-eyed feline cries in its carrier while a beagle-mix on a leash sits on a lap, shaking all over.

They have nothing to say to each other – not cat, dog nor fish.

The fish don’t even notice what is beyond the glass, but cat and dog do not feel it is worth mentioning to the other any of the old speciest issues, considering the jam they’re in.

They know where they are is not a good place to be.

The beagle has memories of his kind being the preferred of the medical experiments because of their docile nature. No one cares that his species also claimed Snoopy.  No one thinks, as they experiment on his kind, Oh, we are doing this to Snoopy.

Or worse, maybe they do.  Maybe they think even if it were Snoopy it is worth it for science. If they would do such things to Snoopy, what hope does he, Not-Snoopy, have?

The cat dreams of how his people used to rule the jungle, rule the plains, rule the mountains – or maybe that is just a story from long ago he heard in a yowl from an alley he was not able to reach. He has never been outdoors, but still he dreams that once Giant Cats ruled all, even the primates.

The fish, the one that was bred to look like the elephant-man, is the one called a flowerhorn.  This fish, people made-bred just that way, for those who like that look on their fish.

The blood parrot, another man-made breed, has a genetic deformity in its mouth that makes it hard for it to eat so he has to have special food.

The red devil will sometimes just chase them both because he doesn’t know why.  That is why he has the devil in his name.

The humans attached to the cat and the dog have plenty to say to each other but aren’t talking, each dedicating themselves to the small rectangle that is their master.  The one that is attached to the gold-eyed cat has an avatar that is flirting with the avatar of the one attached to the shivering Not-Snoopy. They are talking to each other without knowing it, smiling, blushing, into their own better-than reflections.

This is not ironic, for their avatars do not resemble them enough to be able to identify them, and two people in the same room not seeing each other happens most of the time.

Then, a door opens.

The Not-Snoopy is called in first by a veterinarian who can see the trembling of his dog-heart.  She calls out a kind word that makes him wag his tail. There is hope?  Hope he will not be put in a cage like the cat? Like the fish? Just kept by the tether of his leash on the lap of his Master?  Perhaps there will be no needle no pain no sharing the beagle-kinds sad stories of assisting medical breakthroughs?

Not-Snoopy’s Master gives his avatar a “BRB” to take in his tethered, but uncaged, charge.

The human holding the cat carrier sighs as she puts her rectangle in her purse, regarding her gold-eyed pet and cooing what he understands is his name, but cannot make-out anymore than she understands that he has never said ‘meow.’

It is fortunate he doesn’t know or understand his name, even now when it is now called by the vet announcing it is time:

And the mostly hairless primate carries him in by his cage, for whether he remembers or no, he is sure his ancestry is too proud to allow him ever to be held on a leash.   He fights and must be chased and fooled each time to be caught and carried in.

The red devil hits his head against the glass.  Sometimes he does this. Maybe he forgets it’s there, or because he was not man-bred-made, he feels there is more somehow to swim if he can get through. He has forgotten any alliance to flowerhorn or blood parrot. Again, his head hits glass.

The caulk on the back of the fish tank loosens its grip more on the glass to which it had clung so tightly. As it releases like a breath, the teardrops it had cried slowly over the last months find a more persistent plea.

There is no one left in the waiting room

Not even the fish notice how much the tank cries.

To be kept is to not actually know what it is that keeps you alive, even as you watch it disappear.

Laura Lee Bahr is a multi-award winning author and independent filmmaker. She was the Spring 2018 Kerouac House writer-in-residence, where she first became both a fan and contributor to Ghost Parachute. Her novels Haunt (winner of the Wonderland Book Award for Best Novel of 2011), Long-Form Religious Porn, and the short story collection, Angel Meat (winner of the Wonderland Book Award for Best Collection 2017) are all published by Fungasm Press, an imprint of Eraserhead Press. She is also the writer/director of the feature film Boned, which is available to stream on multiple platforms and the co-writer/director of the short film Strange Bird. Learn more at lauraleebahr.com