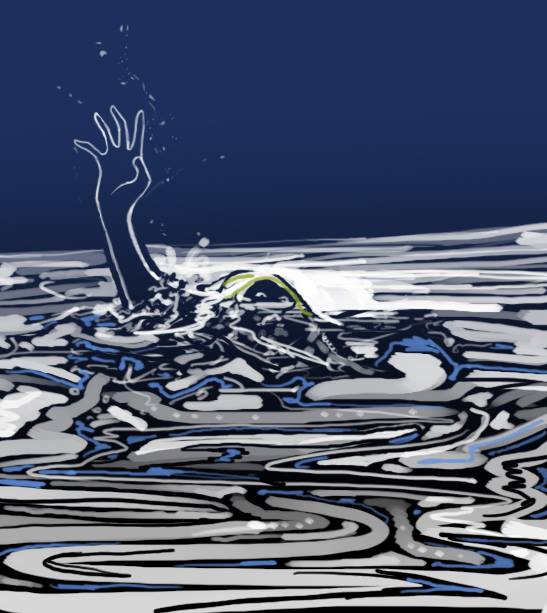 Naomi brews coffee during naptime while showing me the latest inspection report: monitor the nap mats and repair or replace as needed when the foam material is exposed, as it could become a choking hazard. She complains about the cost of new mats while I drink the coffee. I imagine one of the children in her care choking on the foam. I think about the consequence for my sister if they did, and feel a momentary surge of happiness. I take the carafe and refill her cup, then mine.

Her house is overrun with children: Jeremy, his finger digging inside his nose, Smelly Melly, Trevor with the knotted shoelaces, and the after-school kids. Naomi collects the meager checks from each exhausted mother on Friday afternoons: fifteen dollars for after school care, fifty dollars for full day. She ticks the names off the list in her register book, tucks the checks in an envelope. I’m embarrassed for her, cobbling together a life like this.

Naomi’s known for the best in-home daycare in town. Everyone calls her Aunt Bubbles, a nickname from when she nearly drowned at the lake. She was ten and I was eleven that summer. We were swimming to the raft when her head slipped under, her arms flailing, bubbles forming on the water. The lifeguard had jumped from his tower as Naomi’s head surfaced again, gasping for air. Safely on the sand, everyone gathered around and murmured how lucky she was to be alive. My mother stroked her wet hair, my father bought lemonade from the concession stand and held the straw to her mouth.

She’s still reading sections of the inspection report out loud. I know what kind of caretaker she is. I’ve seen her yank the children’s arms. She doesn’t help Trevor tie his shoes until it’s time for his mother to arrive (I can’t be tying his shoes all damn day, she says). But these aren’t the kind of violations the state inspector cares about. He cares about fire drill records and mulch beneath the swings.

I wish I could write my own report: Aunt takes daughter into own home when it’s not her place to do so; environment not suitable for a teenager due to inadequate supervision. I have not forgotten what happened all those years ago. Naomi thought of Emily as belonging to both of us and I wanted to tell her to get her own damn daughter—even though Emily wasn’t a good one, she belonged to me. Strung out on drugs and arrested for shoplifting nail polish and hair scrunchies from Ben Franklin when we had plenty of money to pay for those things.

When I wouldn’t go down to the police station to get her, she called Aunt Bubbles. Naomi let my daughter move into the spare bedroom upstairs with the double bed we had shared as girls, and skip school whenever she wanted. Some days Emily helped watch the kids, a different set back then, but always at least one child who smelled like pee. Other days, Naomi let Emily run around with friends, cooking up god-knows-what kind of drugs in basements and trailers. One day Emily called me crying, word slurred, begging to come home. I offered to take her to a treatment center and she hung up on me.

Naomi lets these children in her care now run around the backyard without ensuring their safety. She doesn’t rake and replace the mulch beneath the swings. Just like she let my daughter run around town on the back of Justin’s motorcycle with no helmet, even though she wasn’t eighteen yet.

Last spring, when Naomi was in the bathroom, I removed the outlet covers in the living room, stuffing them in my purse, just to see if she’d notice. She didn’t. The next report documented the violation: outlet covers missing from living area that is accessible to children in the program. She swore Trevor did it and I nodded in agreement: he did seem like a naughty boy.

For months I waited for the middle of the night call. For Justin’s motorcycle to crash, for my daughter to overdose on cooked-up drugs, choke on her own vomit, or someone’s trailer to catch fire and incinerate everyone inside. It doesn’t matter that the call never came, it could have. Maybe part of me wanted it to: an end to the teenage drama, a reason to pretend I didn’t have a sister.

We don’t speak of that time now and maybe Naomi thinks it doesn’t matter. We are all we have left so I keep coming here every Friday. Family is everything, we say, kissing on the cheeks. I like the noise, the chaos, of Naomi’s house. My daughter lives with some friends now. She cuts and perms hair, waxes eyebrows and upper lips at Elite Hair Salon on Main Street. Maybe she could have been more if she hadn’t been allowed to run wild that last year of high school.

Our coffee cooling, Naomi continues to read the report: a bottle of Clorox wipes was found under the bathroom sink in an unsecured cabinet. She’s indignant about these small violations. I want to tell her that these inspections reveal what I’ve known all along.

At three o’clock the after-school kids come pounding through the door, backpacks dropping on the floor. Jeremy, Melly and Trevor emerge from the dining room, where they had been napping on the mats with exposed foam. Melly has had an accident. Naomi swats her hand and instructs her to get the Clorox wipes from the bathroom and clean the mess.

I get up to leave and Naomi asks me to stay, to walk to the bank with her. She wants me to watch the mothers file through with their checks, telling her what a godsend she is, how they couldn’t do it without her. My sister is no saint though. I’ve known that since that hot August day when she pretended to drown in the lake.

Shasta Grant is the author of the chapbook Gather Us Up and Bring Us Home (Split Lip Press, 2017) and winner of the 2015 Kenyon Review Short Fiction Contest. She was a 2020 Aspen Words Emerging Writer Fellow and the 2016 Kathy Fish Fellow at SmokeLong Quarterly, where she is now Coordinating Editor. Her work has appeared in cream city review, Epiphany, Hobart, wigleaf, and elsewhere. She has an M.F.A. in Fiction from Sarah Lawrence College and lives in Singapore and Indianapolis.