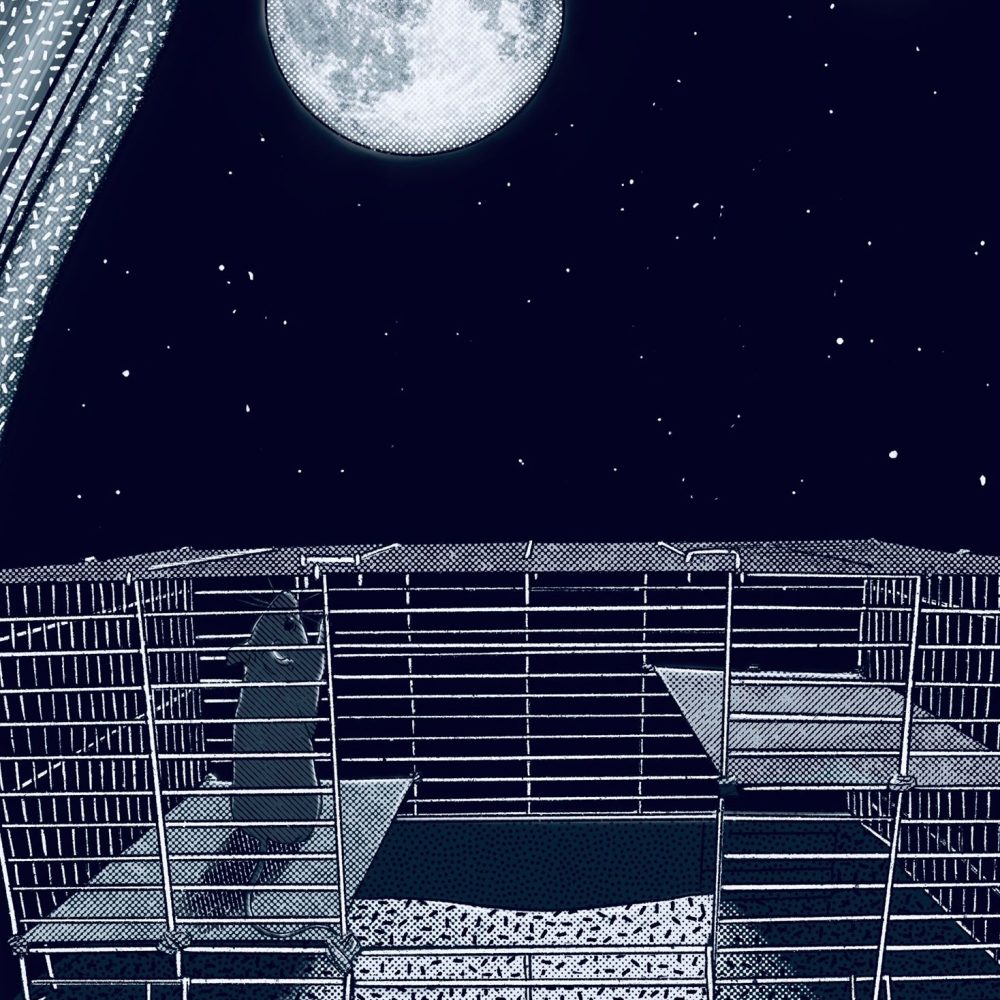 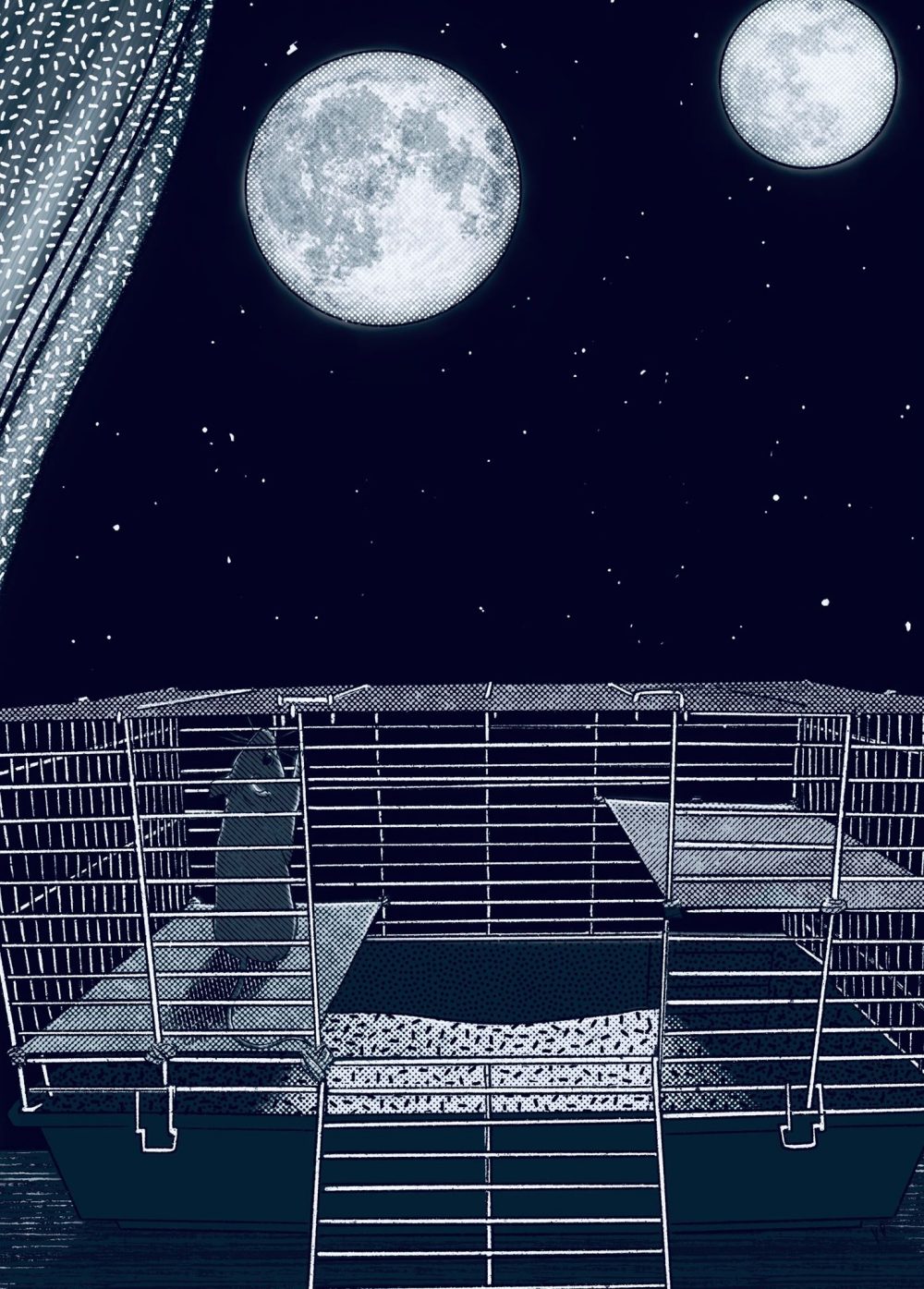 I once saw two moons in the same sky. I don’t talk about it because it felt like something I should hold close, something special.  The next day I met Tess.

Not long after she’d moved in, we saw a mouse-hole in the drywall at the back of the bedroom closet, and later, the mouse himself. I called him Morris. Tess called him Timmy.

“I heard Morris last night,” I would say.

One mouse was manageable. For months, we rarely saw him, and when we did it was late at night. Silhouetted in the darkened room against the baseboard, he would survey the scene before ducking under the door and venturing into the hallway.

Tess and I were a hummingbird, at times darting into life with agency, at others beating our wings furiously with no progress made. She was determined and cultured, much more so than me, and being less so made me a bore. Or maybe the insecurity made me a bore. Confidence is king after all.

I left the basement window cracked open to run a cord for outside lights. Morris invited a date inside. Within a month or two we had little toddler and bigger toddler mice exploring, skipping across the living room floor while I watched television, Tess in the armchair on her phone.

“They’re so bold,” I said, imagining Morris telling them they need not fear us.

“They have to go,” said Tess. “But together, they need to stay together.”

We set up tunnel plastic traps that we bought online. The mice would be tempted by peanut butter, walk into the tunnel and their weight would release and close the spring door behind them. The first couple of evenings, we barely sat down in between the clacks of the little trapdoor closing. We emptied them into a large tub, and before we went to bed we drove to the woods to set our catch free. Seeing Tess there wishing good luck to the mouse family, her skin lit by the moon—the one moon—was too much to bear.

“Anna! Where are you going?” she called after me.

Not long after, a deep froideur set in. An evening of red wine, pad Thai and blistering insults, their intent to harm increasing with unsettling rapidity. And, like a disturbance early in a night’s sleep, after which there is no return to the comfortable slumber that preceded it, the words thrown that evening were our crash landing. There was no pretense it was anything but an ending and she moved out just a couple of mornings later. I was insulted that she’d leave in the morning hours. Neatly packed bags in the hallway, ‘goodnight’, and an alarm set. I deserved screaming, throwing clothes in the car, driving off into the darkness without a plan.

She texted me at nearly midnight.

– Did you check the traps? We didn’t look for a couple days

I went downstairs. One was empty, and the other had a little mouse, one of the smaller toddlers. He was lethargic, not even attempting to dodge my hand. I had left him too long without anything but a smear of peanut butter.

– A baby? You can’t release him alone

I put him in a box and mixed honey and water to make a nectar.  I dipped a chunk of bread in it and put it where he lay. His whiskers trembled and he began to eat. I closed the box. After work the next day, I bought him a tank with a mesh lid and named him Timmy. I kept him as a pet, safe. Not alone.

I make a point to look outside each evening, so I don’t miss the second moon when it comes. I don’t research it, I don’t want to know how long I’ll have to wait. I want to walk outside and know I am seeing something special, just like last time.

Originally from England, Jo Varnish now lives outside New York City. She is the assistant editor at X-R-A-Y Literary Magazine. Her short stories and creative nonfiction have recently appeared, or are forthcoming, in Okay Donkey, Ellipsis Zine, Pithead Chapel, The Coachella Review, JMWW Journal, and others. Jo is a 2021 Pushcart Prize nominee, has been a writer in residence at L'Atelier Writers for two years, and is studying for her MFA. She can be found on twitter @jovarnish1.