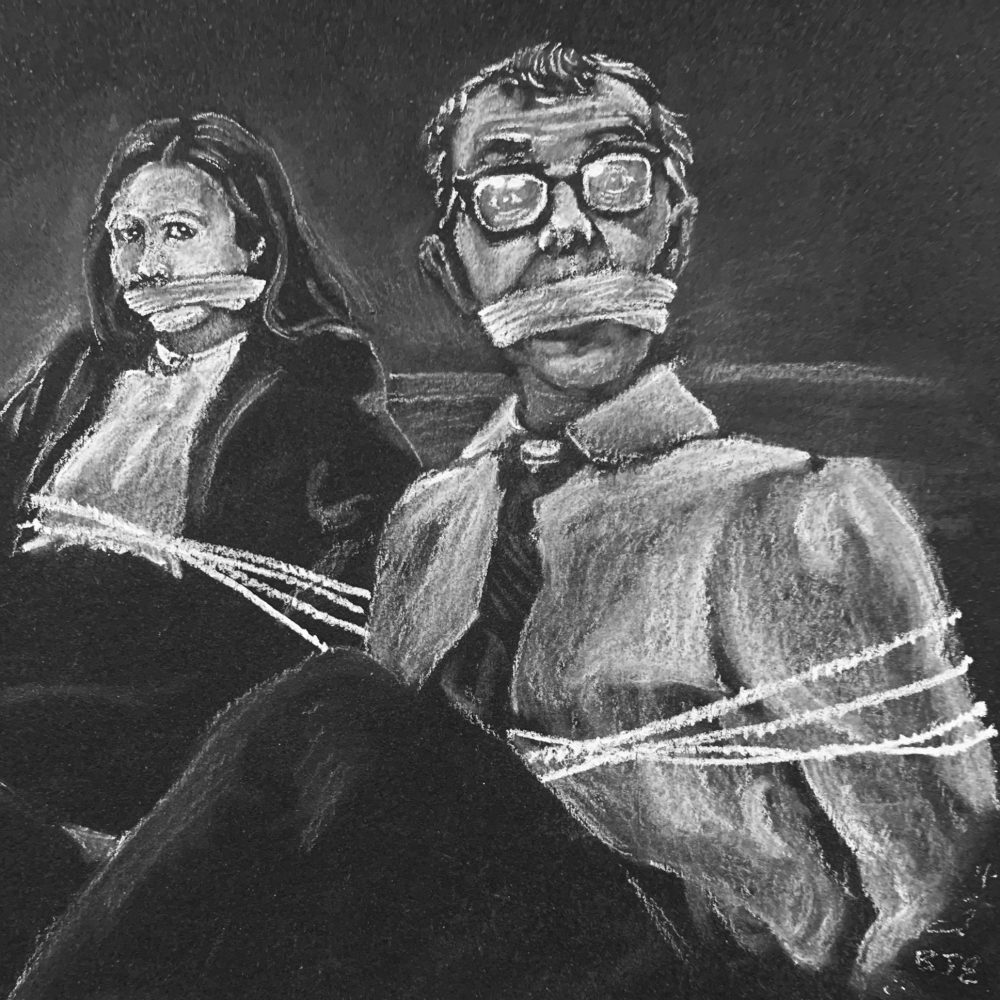 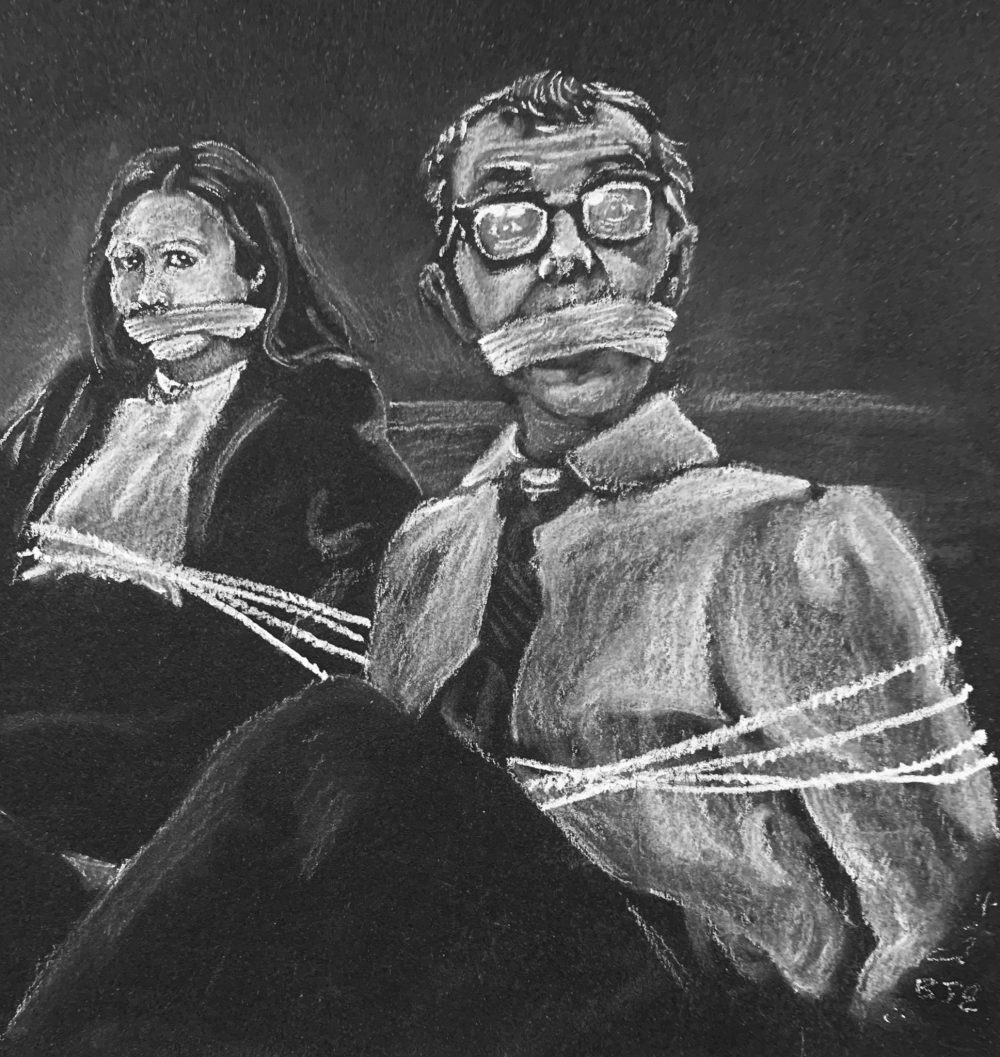 The hostages, though they can’t speak through the fat strips of silver duct tape, nonetheless seem to communicate. I don’t mean anything concrete, like an escape plan. One of them gets a scared look in her eyes, and another one mirrors the look back, like how Mom reflected my anger two days ago when I told her about how Kyra tripped me at recess, hence the scratches on my chin and palms. “That girl is a bully,” Mom said. Then she softened. She said people who treat others like that aren’t okay inside. She said Kyra probably has “a rough home life,” and I pictured walls, floors, and furniture all scratchy as sandpaper.

The hostages are not strangers to each other the way the hostages in a movie I saw once were—random people who happened to be in the same place at the same time. These hostages are coworkers—Dad’s coworkers. Ex coworkers, since he was fired last week. There are twenty-seven of them, the number of kids in my fifth-grade class minus me. I make twenty-eight, but I’m not a hostage.

This isn’t my first time at Dad’s office, so I recognize a lot of the hostages. One of them I know by name. Judith keeps a stash of little toys in her purse for doling out to other people’s children. She’s a no-frills Santa Claus. On visits to Dad’s office, Judith has given me the following toys: a pouch containing eight tiny, colored pencils; a calculator with neon-green buttons; a plastic cockroach that skitters forward on little wheels after you roll it backwards and let go.

Now Judith looks at me pleadingly as though I might help her. Or maybe she’s feeling sorry for me because I’m a kid who is witness to her dad taking hostages.

The word “hostages” makes me think of the word “sausages.” I think of those tiny pig-in-a-blanket sausages that come in shrink-wrapped packs, squeezed up against each other not unlike Dad’s ex-coworkers are now. In the small conference room, only six chairs fit around the circular table. Of course, the hostages are not seated at the table. They’re crammed in against each other around the perimeter of the room. They’re also like a string of sausages, only side-to-side rather than end-to-end.

A hostage situation I didn’t see on TV but heard about because I was up listening when my parents thought I was asleep involved Mom. A gunman entered an office where she’d worked, before I was born, and he’d taped her and her coworkers’ mouths shut, too, just like Dad did to his ex-coworkers minutes ago. Mom didn’t sound scared telling Dad about this. She sounded perplexed. “Do you know what scared me most? I was terrified that man was going to rape me in front of my coworkers. I worked in an office that was all men. I was the only woman. So it wasn’t the fear of death or even rape itself that got to me. It was the humiliation of being raped in front of those guys.”

Now Dad doesn’t say anything. He stands in the doorway, his hunting rifle pointed at the wall a few feet above Judith’s head. He scrunches up his shoulders like he’s got an ache in his back or his neck. I look in at Judith and the others through the glass wall, warming that glass with my breath.

Dad isn’t just mad at them, for still having jobs, or for being responsible somehow for his not having a job; he’s mad at me, too, for having been on the floorboard in the back of his car without his knowing it, and on a school day; and for sneaking into the building, finding him in this situation. Of course, I hadn’t known this was what I’d find. I’d hoped to get another toy out of Judith even though I’m too old for such things now, at the age of eleven. I’d hoped to feel comforted by Judith’s eagerness to make me smile. I’d hoped to feel a little less worried about going back to school.

Most of all, I think Dad’s mad I’m observing his poor role modeling.

That’s a thing Mom is always saying to Dad—that he needs to be a better role model for me. Every time I ask for something—a glass of juice, a new tube of toothpaste—without saying, “please,” he says, “How do you ask nicely?” Mom echoes his question when a few minutes later he inevitably asks, or tells, her to do something without asking nicely himself. Another thing that gets her going is when he says to me, “You’re making me angry” or “If you do ____, I’m not going to be happy.” Mom says, “She’s not responsible for your feelings, Andy.”

I try to think what Mom would say now. On top of everything else wrong with this picture, she wouldn’t approve of the shirt he’s wearing. She says it smells like sauerkraut; she says the smell is locked in and it’s time to let that shirt go.

This is the same language Dad’s boss, ex-boss, used with him. “I have to let you go, Andy.” I wonder which one of these people is Dad’s ex-boss. Four of the men wear long-sleeved shirts and ties as opposed to the polo shirts the other men wear, so I’m guessing one of them. Also, the tie men’s eyes are a different kind of startled than everyone else’s. Like Kyra yesterday when I cornered her in the girls’ bathroom just as the bell that signaled the end of the school day rang, a rock in my hand triple the size of my fist.

I recognize the look in Dad’s eyes, too. The realization that he’s made a horrible mistake, that there will be repercussions, and those repercussions will find him no matter where he goes.