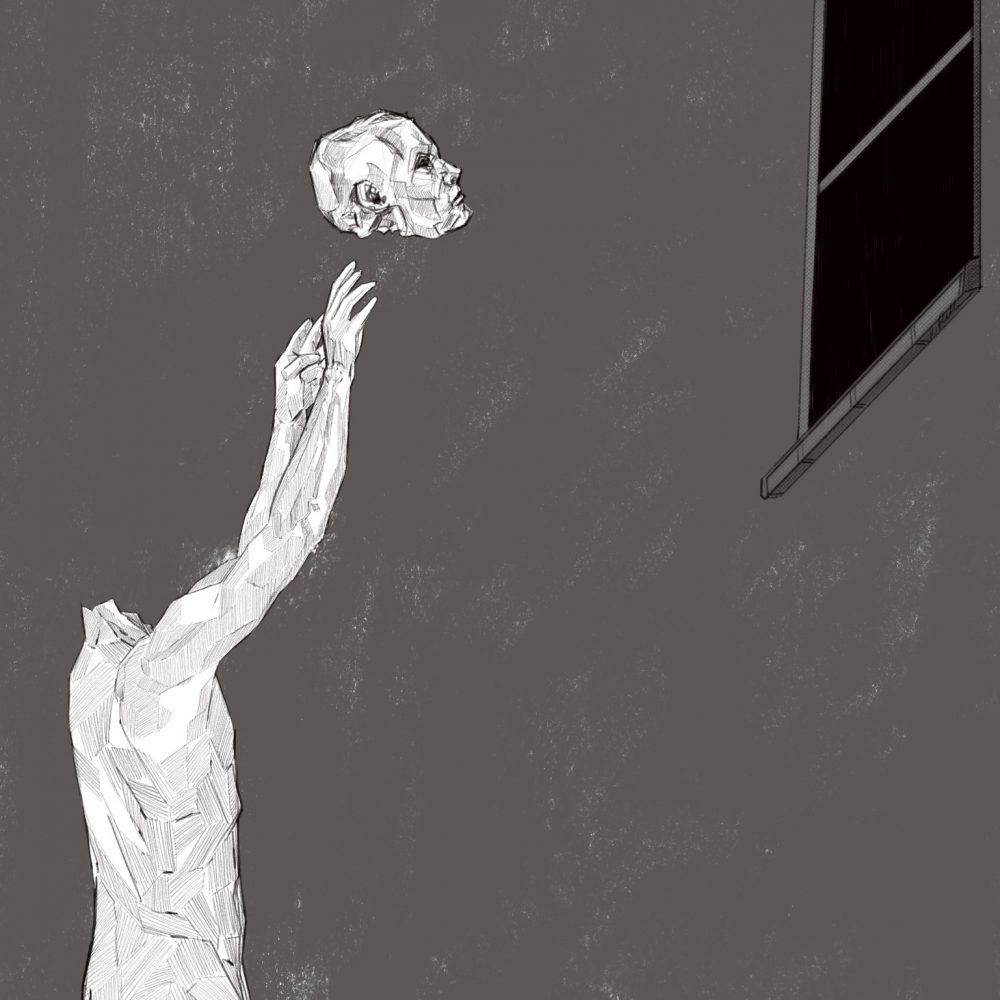 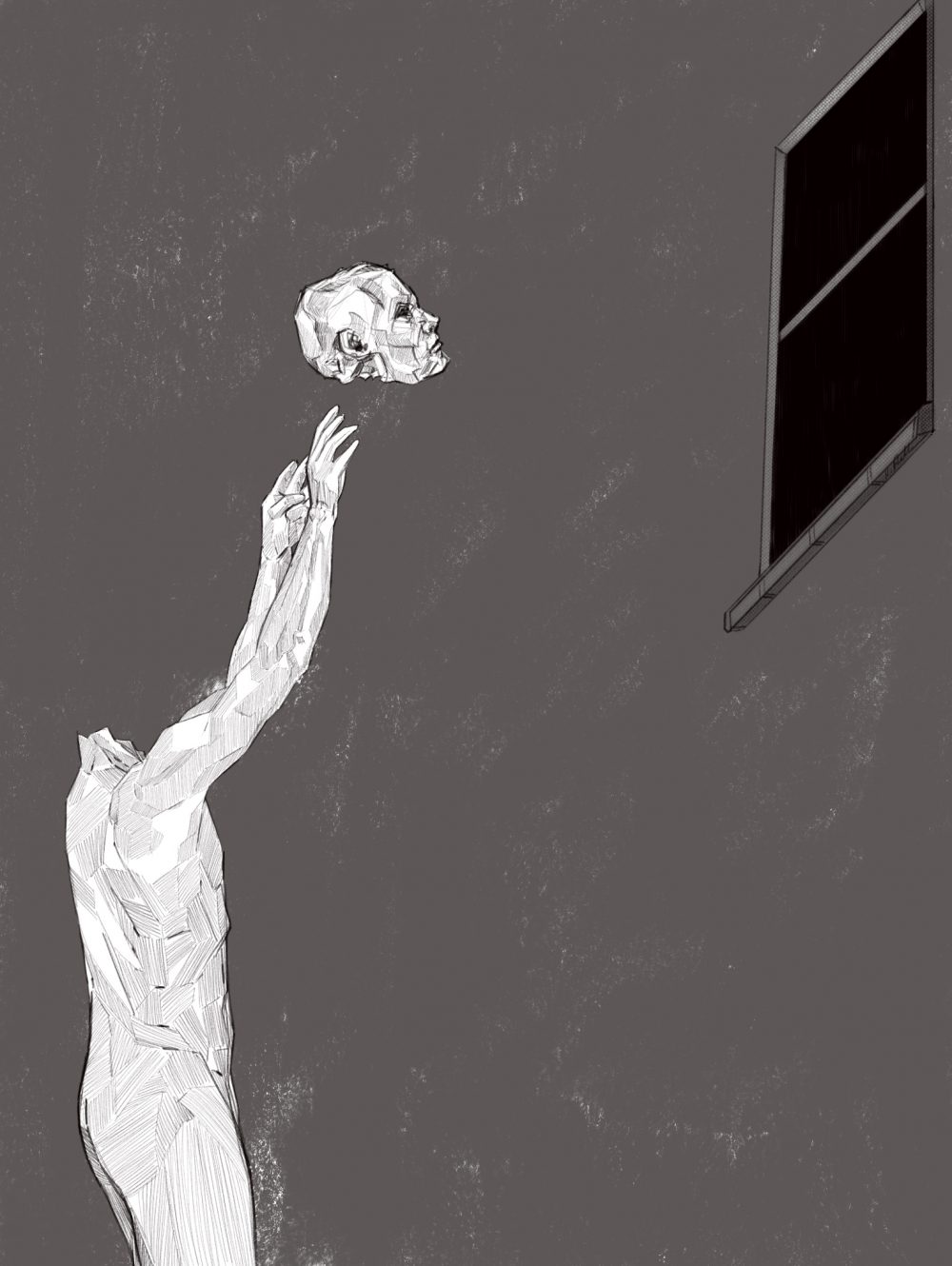 He has neither toner nor ink but there is no message he has to keep. He only has a stack of paper, piled up, that nearly touches the ceiling, with only enough room to slip his hand between the ceiling and the top of the pile to take a sheet off cleanly. He does so with the first sheet and folds it into a paper heart, and the next sheet after that he slips from the top and rolls into an aorta. He puts them aside for now, waiting to fit them into the center of the paper man he’s going to have by the end of this, however long it takes. The next three sheets are rolled together to make a chamber for the heart, and a rib cage around that. He makes the legs like thick pipes, and arms the same way. Each sheet of paper is folded neatly into the next one, shapes he doesn’t even know the name of, but are required to make the paper man stand. And it stands, strong and massive, only without a head. Three sheets remain; not enough for a skull, or a mouth, or a brain, or anything he can use to make a head for his paper man.

So, he ruminates, and asks himself, well, what is a head? What’s a head behind all the science, all the bones, muscles, veins, arteries, glands, eyeballs, tongues and teeth; what’s a head according to a fine Italian painter in the 15th Century; what’s a head to a sculptor shaping clay in what would be Canton in 2,000 years; what’s a head to the first caveman whose friend asked of him, what’s a head? What does it look like? Paint one, now! And the caveman’s friend could only have said that a head is a big round thing that goes on top of you that you see out of and put things into. So, with only those three sheets, he makes exactly that. He places it on the broad shoulders of the paper man, a dome he has made out of the last three sheets, and it fits not perfectly but well enough. And once it is on, sturdy and secure, he pokes his finger into the head, rolls it around inside to make the hole bigger, and does the same thing a second time adjacent to the first one he carved out, so there can be some place for things to go in for now, and maybe something to see out of some day.

The paper man stands for now, with nothing to break it down and no wind in the room to blow it apart. But it crumbles anyway, sliding in on itself. So, he wallows for a little while, and in his wallowing he sees what the paper man was lacking. It was constructed out of what a man was made of but not what made a man. There was nothing at its core to hold it up and face the world. So, he stacks up his papers again and writes a little truth on each of them. He himself doesn’t have enough truths for an entire man, let alone one as big as the paper man, so he strolls around outside to find some more. He finds some in a child with a popped balloon, some more in a plate of uneaten potatoes, and still more in a stray cat with two different colored eyes; he goes around and collects from anything that can’t lie. Most people don’t have anything real to tell him. But they do have secrets to hide from him, which he snatches from their pockets like cotton-balls. The best secrets are the simplest, snatched the simplest way, in sprawling crowds of somnambulists. He picks up all the tiny things that nobody needs to know: a silver hair hiding in the curl, a night of bad decisions, or a dead insect, flattened, that no one cares for. And he comes home, eats a bowl of soup, has a cup of coffee or two, and gets back to work by writing down what he’s stolen.

He has just enough ink to write down everything he picked up big and small, taking it in and then setting it down for good. Everything was taken down from basic facts of the matter to things held close to the chest. And on the brim of the dome he made that fit on the man’s paper neck and shoulders he puts down the simple truth with the last bit of ink made liquid by mixing it with his blood. And he twists and bends and creases all the pieces back together in the same order as before.

The paper golem is finished now and he goes up to sleep, but not before giving it its first order: Higher. He drips with sweat from the day’s labor, opens a window to let in a cool breeze and hits the mattress. He never sees how the golem finally moves and cranes its neck up toward the sky through the open window, how it feels the breeze rippling across its skin, and begins to pluck itself apart. It takes away the sheets of its body in the reverse order of how they were created, folds them in different ways, and chucks them out the window. He never sees this, any of the pieces flying off into the breeze. He only sees that in the morning the golem is forever disappeared. Off on the wind, somewhere away, in a small town or fishing district or someplace with very good pastrami at the cafes, things would get stirred up on a gust. The paraphernalia left by the passers-by, the flotsam and jetsam of those grayest skies, all swelling and rising together. No one would notice bits of paper folding themselves into airplanes never coming to the ground, just skipping on the hot air toward the blue edge of the sky.

Raymonde Chira is a librarian and writer of short stories and comic zines. She has had non-fiction work published in Djed Press. She lives in New York City.