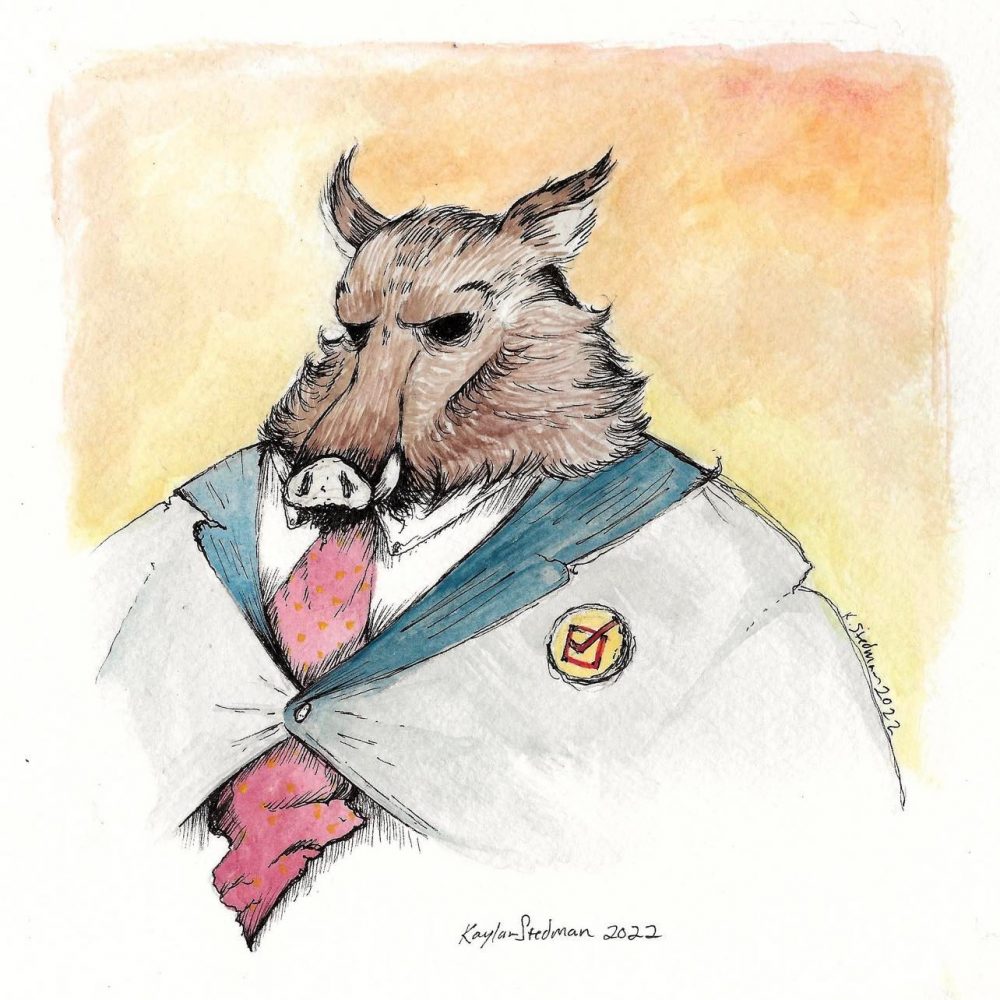 They only appeared at night, at first, creeping from the woods. They kept away from our cars, from our houses, from us. We could only tell the next day by their prints on the ground, and the scattered rubbish left around the overflowing bins.

The first sightings morphed into ignored voices. The council regarded them either as urban myths, or suburban problems, all equally irrelevant – like the lack of public transport, and the potholes. If anything, the council people laughed at us, said we had the perfect ingredient for a rich tagliatelle sauce, why complain?

Then they started to spread. There was nothing strategic in their invasion: just little incidents, but by now we were sure they were getting closer. They stole left-over tourist menus from restaurants in Trastevere, the Pantheon square, the terraces overlooking the Colosseum.

And then the pandemic came. While charming deer and grazing goats invaded the other cities, it was now official, even the mayor had to admit: we had the wild boars. From our balconies, we pointed at their piglets skipping around the baroque fountains, following their mothers, their fathers pointing back at us, with their tusks, their growls echoing in the now empty piazzas.

When we were allowed out again, we first thought they would leave. Like the deer, and the goats in the other cities.

They didn’t. They held on to their outposts, using rubbish bins as trenches, chasing us in parking lots until we ran away, leaving our groceries for them to munch. After news of the first attacks came, we started to tell ourselves we could coexist. Hadn’t we overpopulated the world? Didn’t they have a right to inhabit it just like us?

Then they said they wanted to vote in the mayor elections, and we laughed, we found it bizarre, but we didn’t say no. Except nobody among us really wanted to run Rome:

‘It’s too hard,’ we all said, ‘especially now with the wild boars.’

Only the wild boars wanted to run. Only they went to vote. And they won.

That’s when they started to decapitate our statues. No more Cicero heads, no more Nero, or Caesar. All replaced by wild boar heads, with their spiky hair and tusks and pointy ears. Journalists who complained about this, disappeared, while the new mayor growled that we must create something that the new generations in town can look up to, something in which they can mirror themselves.

We started to meet at night. Unlike them, we left no traces. We discussed plans, strategies until the early hours of the day. The first of us who tried to protest, ended up jumping on cars, or walls, hanging on rails to be spared. Our stitches were shown with pride, we were welcomed like heroes, our failures overshadowed by the laurels of our audacity. Doing something made us feel stronger, for once. But all our efforts to fight them came to nothing, their families growing in numbers we only knew from many generations before, with black and white photos to prove something that to our lifestyle now seemed like from another planet. Out of despair, we started cleaning the roads, making sure there was no rubbish left. Restaurants began giving leftovers to the poor instead of throwing them into the bins, until they discovered how to cook better so there were no leftovers to discard, and the money they saved, they gave to the poor directly.

Some say it all happened because there was no more food left in the streets, some because we showed we cared in a way we had never before. But when one day one of our children went to peek behind a rubbish bin trench, our breaths held so tight all you could hear was the sound of the Ponentino wind swirling in the streets, the wild boars were gone.

Slawka G. Scarso has published several books on wine in Italy and works as a copywriter and translator. Her words have appeared/are forthcoming in Mslexia, Ellipsis Zine, Fractured Lit, Scrawl Place and FlashBack Fiction among others. She was recently shortlisted in the NFFD Microfiction Competition and long-listed in the Reflex Press Novella Award. Her novella in flash, All their Favourite Stories, is forthcoming in 2022, published by Ad Hoc Fiction. She lives in Italy. You can find her on Twitter as @nanopausa and on www.nanopausa.com