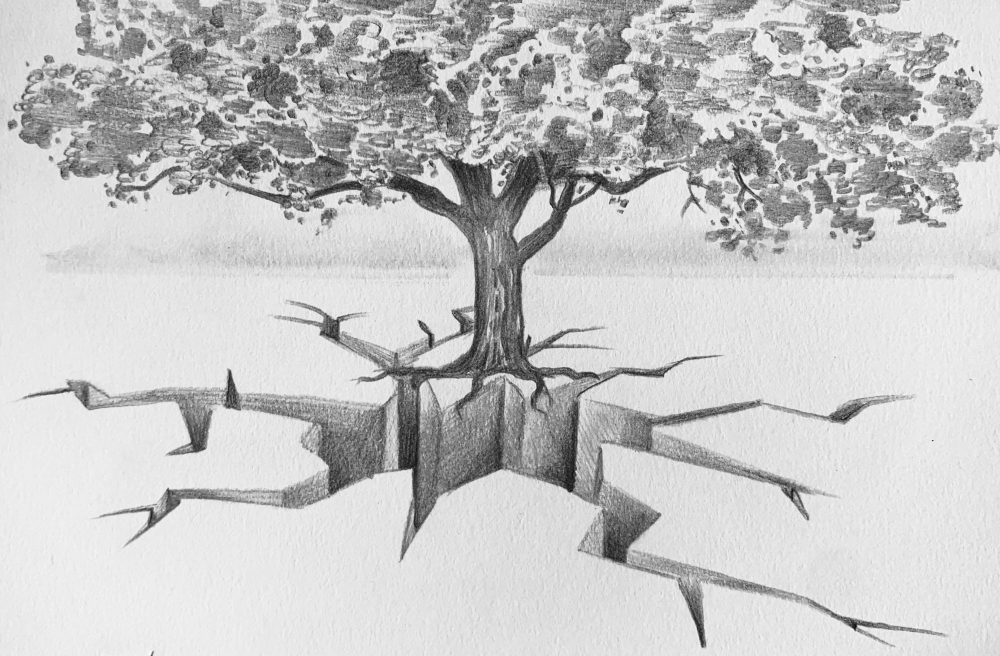 The authorities are helpless. The scientists confused. Mixed messages come and go like the sun. No one has ever planned for widespread fire beneath the earth, how something so much like soil uses air to attack us. But now we see what 1000 degrees does, the hot spots we watch in the way we inspect our fireplaces for the unlucky ember before sleep. But now we live over exhaust, thirty-five parts per million on a monoxide alarm that sends a siren into our sleep. Our neighbors have boarded up hope; the government stands ready to raze the future of where we live, all that’s left to us of politics. The earth, we have learned, is fuel. Beneath us is an eternal candle.

We are three couples walking into a field plowed under to suppress the height of flares. A winter without snow squats over us and refuses to go. There is a kind of half-light we have grown used to, the cleared landscape draped at one end as if its window were ragged and broken. It takes miles of driving, now, before the sky can surprise us, but this night we stand together and scuff the soil, the moon seeming to search only for us like a weak-battery flashlight that can make nothing out for certain. Even if God held it, he would still need to call, “Is that you?” or “Who’s there?” For a few minutes, the oldest of us works his shoes in the loose soil, shifting in tiny increments like a wrist wrestler trying to get a slim advantage of leverage. The nearest exhaust pipe is twenty yards away.  Another one stands forty yards off. Those remnants of hope, like our town, have been abandoned for months. “Right now,” he says, “we’re the opposite of Noah, standing here on the first piece of the earth to die.” His wife says, “For years, we have been sleeping with a leper without noticing our faces have disappeared.” The rest of us nod to both. I imagine a toll gate, someone ringing a contagion bell to warn the foolish away from our small, but expanding country.

They came to the empty houses in our town, each boarded and locked after our neighbors left for the last time, leaving behind the things they would live without. Backyard vents still shaped the world beneath us into columns of smoke that turned the looters wary and timid. When the last stand of nearby trees ignited, the looters fled in their half-filled trucks, driving the road-blocked highway where the earliest fissures yawned.

We were the second town to be devastated. Because the world believed it was singular, the first was famous, periodically, for years. We were talked about for days. But after a fire, from underground, reached another town, the soap-smooth voices at press conferences washed themselves and left. After the closest forests to a third, fourth, and fifth town succumbed, we were no longer a coincidence. By then, the news began with square miles and refugees. On the day that the sizes included the names of three other states, there was barely room for a story about a deer in an untouched county with an arrow in its head, how, though surrounded by fence, it had been stalked. “How awful,” the newscaster said, an enlarged photograph of the wounded deer behind him.

We have begun to think like snakes, aware of how we touch the smoldering earth. The copperheads have taught us, dragging our fear through the empty streets. Uneven, we’ve learned, this crust over fire. We watch our shoes for the first sign of collapse. The snakes swim on the soil. They surface through winter, disregarding the limits of their blood.  Subsidence. Monoxide. Venom.  Everything is feeding our choice. The snakes no longer think of ankles and feet. We coil. For now, what saves us are foundations.

Gary Fincke's new collection of flash fiction The Corridors of Longing was published by Pelekinesis Press in 2022. His long-form short story collections have won the Flannery O'Connor Prize and the Elixir Press Fiction prize. He is co-editor of the annual anthology series Best Microfiction.