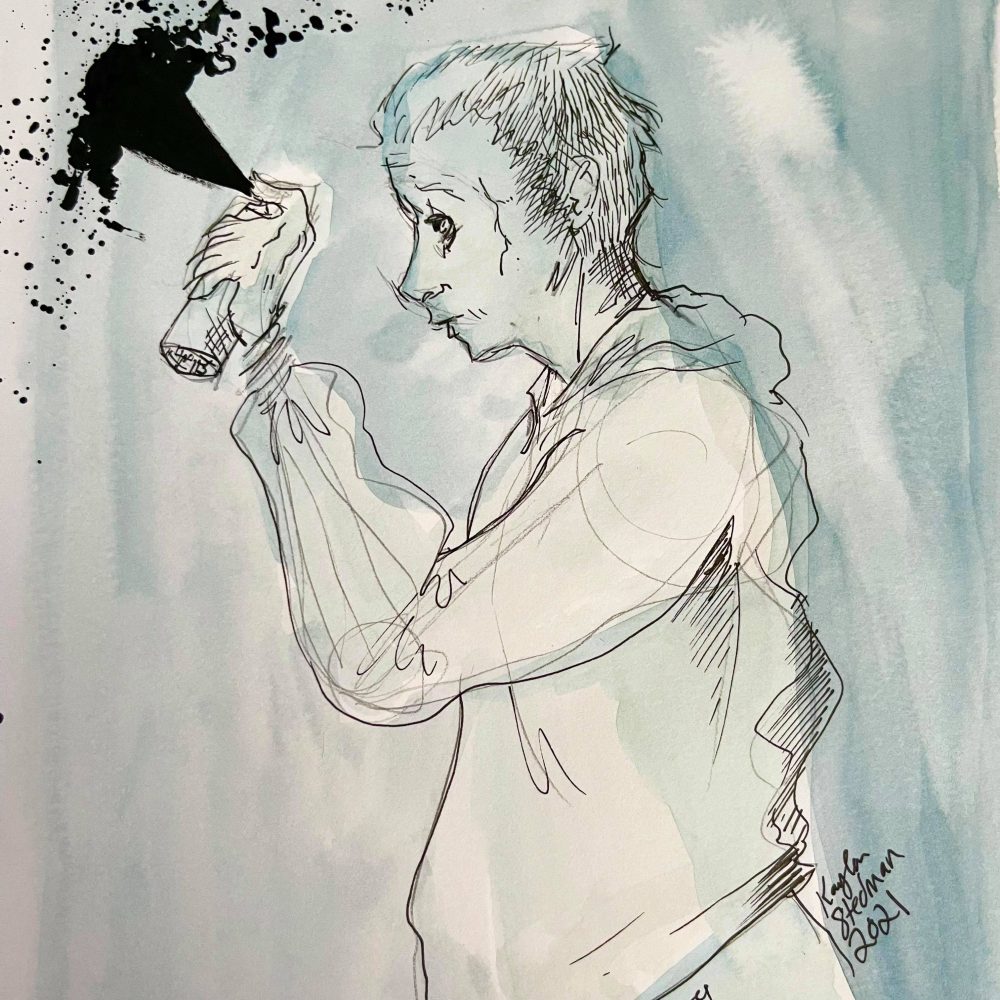 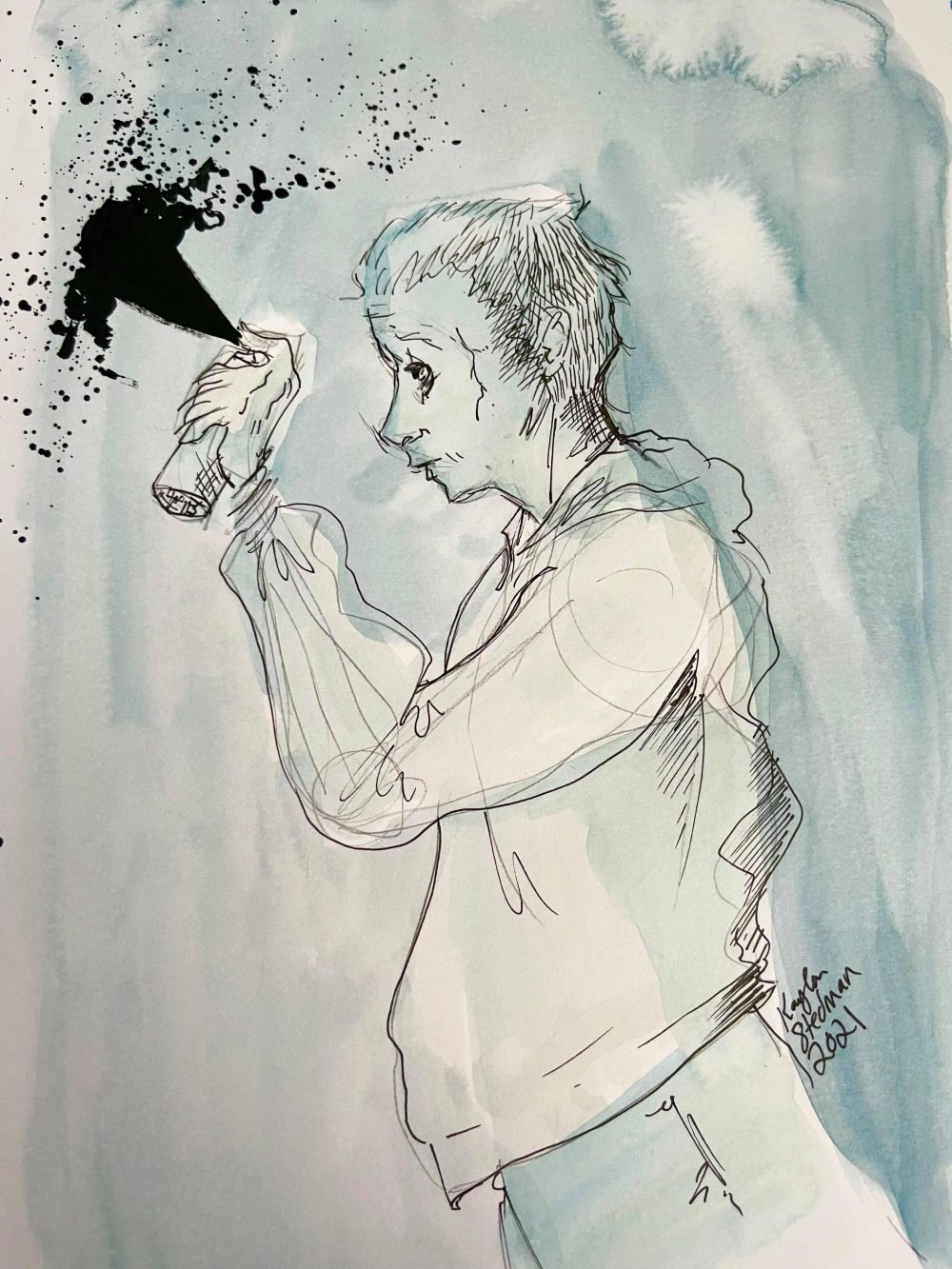 It might sound weird that the MIT guy makes me think of Herbie’s. I’m watching the video of him explaining how the way electrons move proves beyond doubt the existence of parallel universes. It’s hard to follow what he’s saying, but, shit, the guy’s a professor at MIT so he must be right. I close my laptop and grab my keys.

I drive over to the old Herbie’s building. It’s been closed for years. The yellow stucco exterior is grimy, and the teal painted plaster around the arched windows is peeling. The neon sign is no longer there.

It used to be that everything stayed the same. You knew the ages of the kids who lived on your street, you knew the jobs their dads had, the names of their dogs, the cars their parents drove. That was the best time, the purest, when it was still. With no warning, life got to changing, fast. Dads left, dogs died of cancer, kids went to college, whole families moved for new jobs.

Thursdays kept something still for Jonny Kubecka and me senior year of high school. They were our constant. We didn’t hang out much else. He had football and I spent my time with my crew, working on our crappy cars and trying to get laid.

After shop class together on Thursdays, we got in the habit of heading to Herbie’s for lunch. We’d sit in the teal plastic booth and spit miniature wads of paper through our straws at each other, chow down on bacon cheeseburgers or loaded hot dogs, and shoot the shit.

Marcy, a cashier, was a few years older than us, and holy crap, did Jonny have it bad for her. With long, dark cherry hair parted in the middle, and tied loosely at the nape of her neck, a gap between her two front teeth and her arms adorned with luminous bangles, Marcy was a goddess. If Marcy was on, and she usually was, our chances of making it back to school on time took a nose dive.

“I see the way you look at me, Marcy,” Jonny would say.

“I’m way too old for you, kiddo,” was her usual response.

At our booth, Jonny and I usually got to talking about his favorite topic, and that was the supernatural.  Aliens, UFOs, parallel universes, he was into that stuff. It sounded hokey to me, but Jonny had a way about him, made you want to listen.

“It’s impossible that there aren’t aliens. Did I tell you about the sightings in Puerto Rico?”

I step around the shrubs lining the building and look through the window. The cash registers have gone, but the chairs are still there, stacked. Our booth, close to the counter—close to Marcy—remains, as if Jonny might walk in at any moment and dump his backpack on the table before stepping up to order.

When the newly retired mayor of our town keeled over from a heart problem, they renamed the park in his honor. When the high school baseball coach was killed in a crash during a flash flood, a plaque was installed at the school stadium. When Jonny Kubecka died, I didn’t even know for a few months. I knew he’d been about to deploy to Afghanistan or Iraq, so when I initially heard, I assumed it was over there. I came to find out he never made it. A few nights before he was due to leave, he got into a drunken altercation with some guy in a Reno club. Jonny took a bottle to the face, fell and smashed his head on the sidewalk, dying right there in the street.

I make my way to the front of the building, to the main door, and peer in, my hand framing my eyes, trying to shield the glare of the reflection. Just inside the foyer, there’s a sunbleached cardboard cut out of a huge hamburger.

“Cole?” I turn to see Erin, who, like me, still lives in our childhood town. She’s holding a bottle of wine in a bag from the liquor store next door.

“I’ve got a case of nostalgia.” I say, “Remember my friend Jonny Kubecka?”

“He was on the football team, he died some years back.”

“Vaguely.” She scrunches her face. “Was he blond?”

In some parallel universe, Jonny’s in the army, enjoying his career. In another, he managed to convince Marcy to go on that date. Maybe in that universe, Marcy isn’t a single mom to a bunch of kids, working her ass off at night school to get her nursing degree after her last loser boyfriend cleared off with her savings.

I come back later when it’s dark. On the side of Herbie’s, facing away from the street, there’s an expanse of the dirty yellow wall. I take out my spray paint aerosol can, the color as close to Herbie’s teal as I could find, and I spray in huge letters: JONNY KUBECKA RIP.