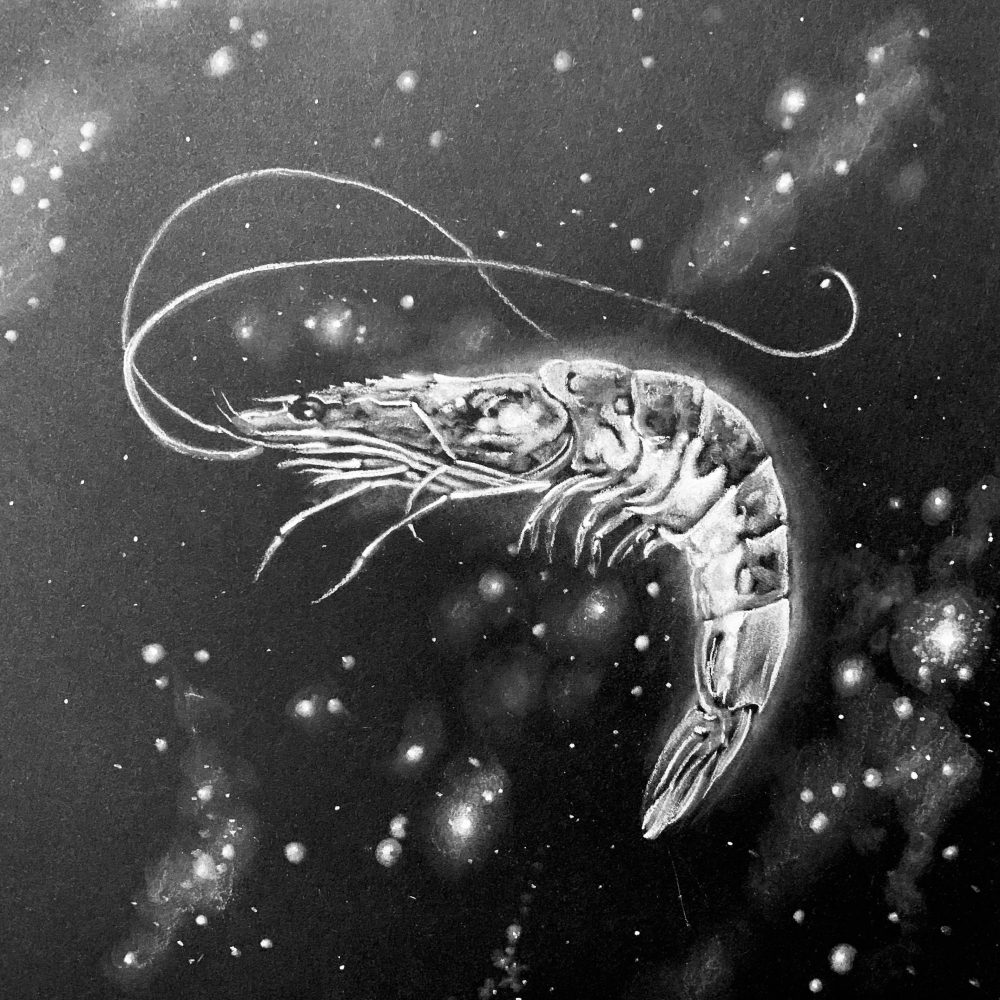 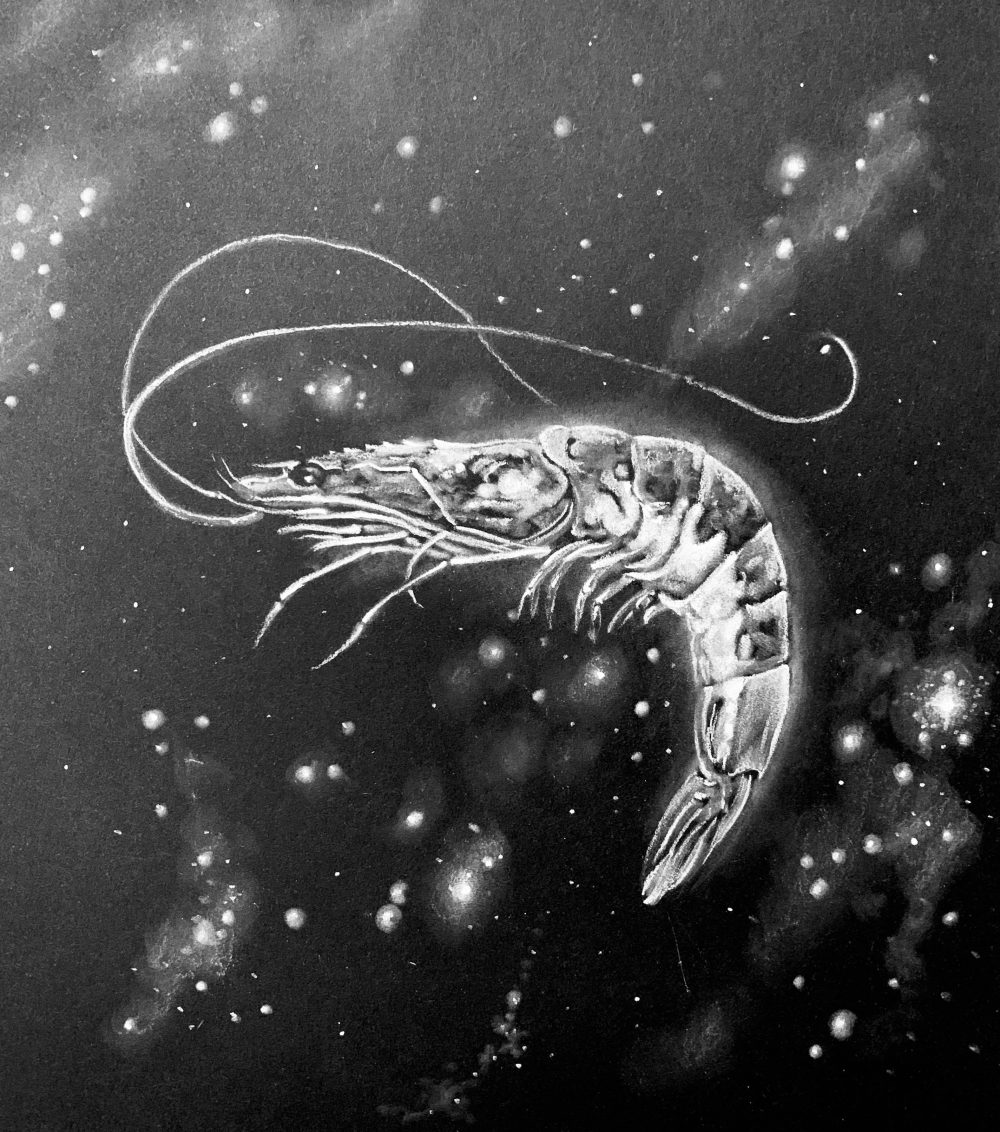 After getting our teeth cleaned, we were allowed one—just one—glow-shrimp from Dr. Dunkleosteus’s prize box, but we’d pretend the Novocain swole our jaws till they gaped. Then we’d swim past that box and slurp a mouthful, the whole thing if we could, and dart out of the office keeping our teeth wide and our lips pressed together in an effort not to crush any of the precious shrimp prematurely. We’d swim to the deepest depths of the Loch, then chomp-chomp-chomp (friction makes them fluoresce).

Shooting the luminesce glunk upwards so the water danced with masticated stars. Auggie could blow rings. He acted like this was a natural talent, but it was really a factor of his crooked grin. Every tweak on his braces meant a trip to Dr. Dunkleosteus and a mouthful of glow-shrimp. Auggie had lots of practice, but I out-boasted him. I bragged that one day I’d surface, stick my head right into the air, and stare at real stars like my sister did.

My big sister swam with a school of surfacers. When Mom freaked out about it, Dad tickled her gills and winked that they were once young too. It was embarrassing, but I figured Dad was right.

Nonetheless Mom worried that I’d be next. She complained to the Loch Association and Dr. Dunkleosteus replaced his glow-shrimp with barnacle bubble-gum. Mom’s bad faith safety measure ricocheted like sonar off a shipwreck. True, glow shrimp had whet our appetite for surfacing, but glow-shrimp also satisfied that craving in ways double-bubbles never could. My friends and I didn’t want candy. We wanted starlight. Absent the glow-shrimp we started daring each other to surface —and waited with bated breath for the dare to come to us.

The stars were beautiful.

The stars were also passe.

Starlight is like thousands of years old. Billions, maybe. Once the initial thrill of transgression wore off, and we recognized stars for what they were— glittery tears dropped from the empty worm-holed eye sockets of long-lost Jurassic heavens—we wanted something more. The coolest Nessies, like my sister, chased something brighter. Something human. A chunk of sun under control. Less like the jellyfish my mom read her novels by, and more like the eels of the last war. We weren’t idiots; we knew ship lights were dangerous, but theirs was a beauty only the brave got to see.

My sister said they felt good.

Some fish couldn’t handle them.

(if you believed my sister)

Word in the wave was just one direct beam could hook you. My sister scoffed. Ship lights attached to neither hook nor line. And even if there was a hook, human boats were small. We were strong. The worst that could happen was a little capsizing for them and a little headache for us.

In a matter of moments, I was a light-head. What a splash! The beam entered my eye and flooded my cornea with Loch Ness delight. My scales tingled and shriveled in the Loch air. Fringing and ruffling. Sizzling like nothing I could have imagined: a grand electric exfoliation that roughed my smooth skin into a crunchiness that fell away like a confettied exoskeleton, setting my underlayer free, and tentacling my soul to the Loch wind. I didn’t worry about my brainstem; I didn’t even know what a brainstem was before I started surfacing.

And maybe I was just lightheaded but, more than once, I thought I saw Dad at the surface, yet whenever I turned to look …

—the cameras changed everything. The cameras were different. Their click and whir took something. But, like giving love (if you believed my sister), submitting to their flash felt good.

Auggie was the first to really lose it. After a bad flash, he washed right up on shore. His gills pumped air as he drowned. A leering, lightmarish smile obliterated his face. He giggled while the gulls ate his eyes.

But Auggie was born weak.

We could control it.

And Auggie’s sick giggle made us want to, you know, avenge him.

But when it happened to my sister…

I chomped her fin and tried to pull her down to safety, but I was weak from flashing. As I swam her body broke apart. —Chunk—

All that flashing had disintegrated her connective tissue and exploded the fat in her grey matter. Her whole frontal cortex bloomed out her blowhole like algae. My sister and Auggie weren’t the only ones. It got half our pod. When the sun rose, the loch stayed dark, clouded with gulls feasting on the flotsam of my sister … Auggie … all of them starry chum.

Now I swim with a new school: The Flash Divers. When we spot a glowing amoeba on the surface, we dive low and chase it. Then, calculating its speed and distance against our speed and distance, we shut our eyes and rocket blind at the dark nucleus, which is the ship. Fish say trigonometry and concussions don’t mix, but practice makes perfect. The most brain-bashed among us have the best aim. We boast revenge, but also get what we came for because—crack the hull or crack your skull—on impact we see stars.