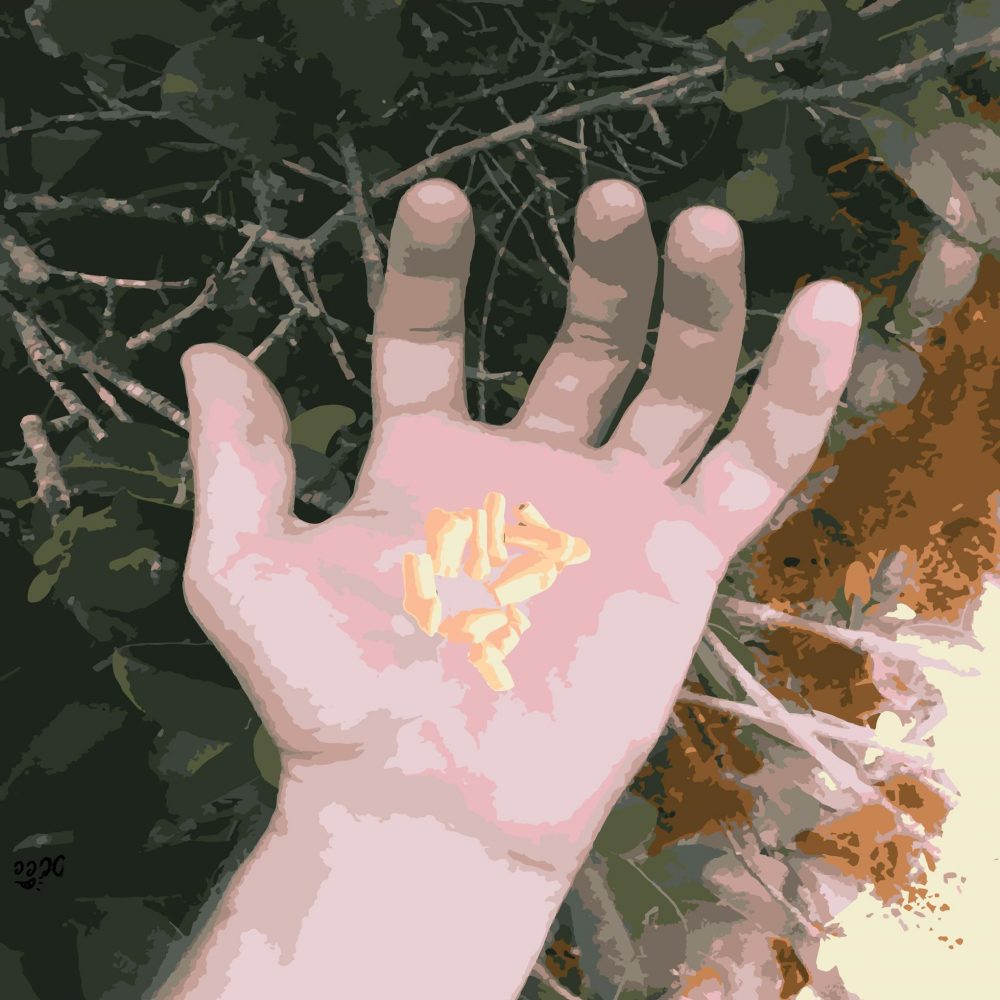 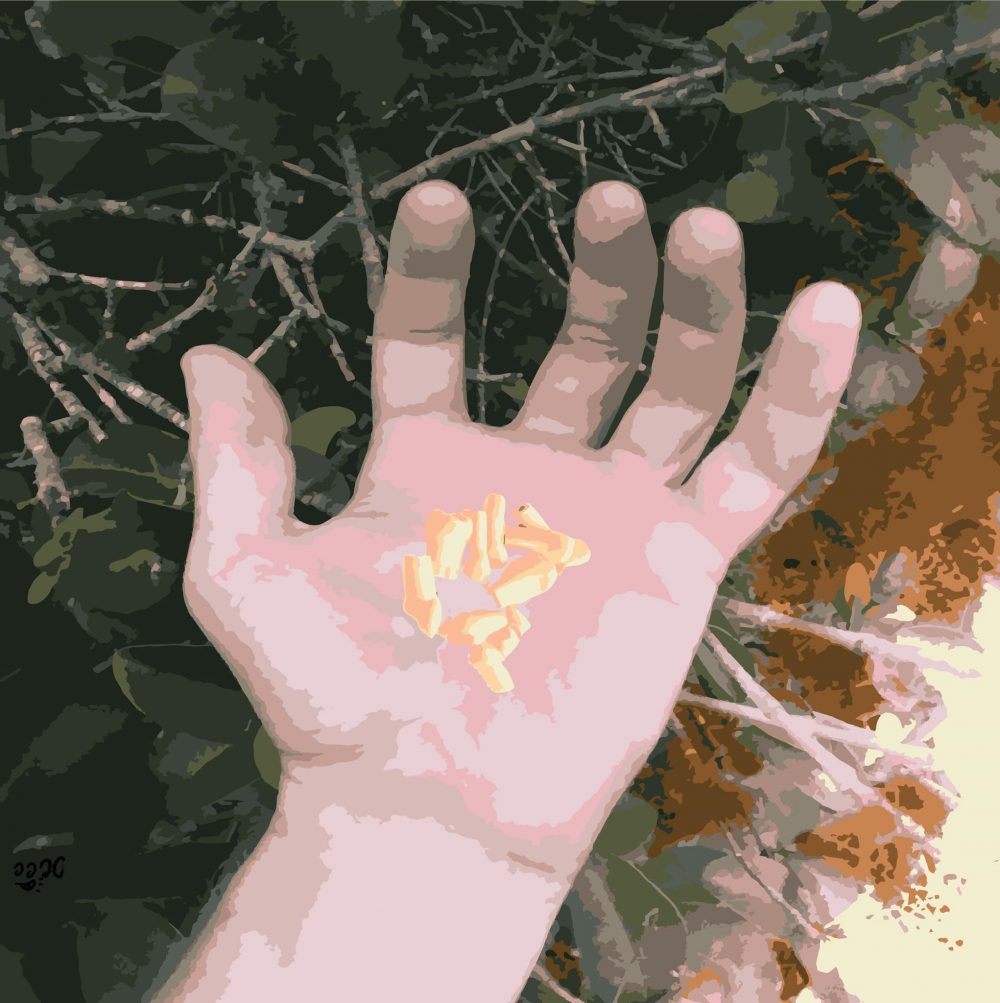 I was perched on a low limb of a huge tree and must have been there for a long time since my ass-cheeks were numb from sitting on the wood. It wasn’t the worst place I’d come around in. I knew better than to take something from an already-open sugar packet passed beneath the divider in a bar’s dirty bathroom. As a buffer against the light streaming through the leaves and branches above me, my eyes leaked whatever liquid my body had left. Everything looked watery, ill-defined.

I was in a fancy neighborhood next to a massive brick house and wearing a suit I’d stolen the previous morning. The suit was too big, dark brown with baby-blue pinstripes in a windowpane pattern. Wool. I’d walked into the Macy’s, looked around for a time, put the suit on over my jeans and sweatshirt, and just walked out. Most employees didn’t want to bother with stopping someone they hadn’t really noticed in the first place. For a minute or two, I thought about all the layers I was wearing and how, in this way, the tree and I were very much alike. Rings upon rings and all that. I pictured smaller and smaller me’s beneath my skin having to do what I wanted to do, tiny unwilling hands inside my own.

I guessed it was late morning, but I had no way of knowing for sure. It was just a feeling. A bicycle bell rang out, either in the street on the sidewalk. It reminded me of a different bike, the old kind that you had to pedal backward in order to stop.

I didn’t remember why I had climbed up, but I figured it out pretty quickly. On the side of the huge house above me, I could just make out a window, and in the window, a shower curtain. The tree grew close enough that I could climb up to it. It was chilly in the shade, and while I was grateful for the extra layers the suit provided, I couldn’t continue to sit in the same spot. I decided to climb up and complete what I assumed had been my original task.

What I had taken as a shower curtain, turned out to be just the regular bedroom kind, if a bit shiny and chic. The branch held my weight and I could see easily through the closed window. The bedroom was spacious, huge even, and done up in whites and creams and soft golds, all clean, trim and proper, like a poorly imagined heaven. A man sat on the edge of the unwrinkled bed facing away from me. He held a book flat and unopened on his lap and he didn’t look at it. As far as I could tell he wasn’t looking at anything but the smooth wall in front of him. Some sort of circular toy sat before him, perched upon an ornate stand.

I reached in my pocket for a cigarette, but my pack wasn’t there. Instead, I pulled out a handful of teeth. Human teeth I guessed: all different kinds and relatively clean. They clacked pleasantly in my palm and I rolled them around like metal stress balls.

I had a vague recollection of a debt I was owed, some bad joke about the tooth fairy, and my general lack of physical prowess while spun out. If true, this wouldn’t be the first time I had received odd goods in exchange for services rendered, and I felt like those interactions rarely ended up in my favor. That was one possible explanation. But, maybe the teeth were in the suit pocket when I stole it? Maybe the teeth had been passed from person-to-person like this, through strange coincidences, for a long time? A millennium? As I rattled them around in my hand, I imagined them as an ancient talisman and wondered what had passed through their worn crevices.

I had the sudden urge to tap on the window, to rouse the man from his thoughts, but before I could, he leaned forward and pressed something on the toy. It lit up from the inside and began to spin. Strange shadows erupted from it, casting incomprehensible shapes over every surface, all fangs and horns and wildness, like fornicating devils whirled out, dancing over the pristine room, ghastly things, evil things, flowing quickly, features distorting, silent and dreadful. It’s a terrible feeling to watch something dance to music you can’t hear. I nearly fell out of the tree.

On the wall directly in front of the man, the shadows morphed into focus: first a child playing with a dog, then up in a tree swing, then on a slide, and over and over. A happy little scene. The only place the shadow story made sense was on the small bit of wall directly in front of him. He’d picked the perfect distance for what he wanted to see. I couldn’t stop looking at the spots on the fringes where the playing child distorted into and out of monsters. I wondered if his eyes were drawn there too, but he just had better control.

His shoulders shook slightly and he thumbed a circle on the outside cover of the book. I doubted he realized he was doing it. It was an intimate moment for us. In spite of the dancing devils, I thought then to reach out and console him, but the window was closed, and anyway, I didn’t possess the kind of words that might take away his gentle sorrow. I took out the handful of teeth and set them on the windowsill, prayed all the ancient words they knew might leak through with a breeze and a cracked window.

I left him, feeling again that I should get out of the tree, but deciding instead to see how high I could climb. I guessed from the top of the tree I could see everything.