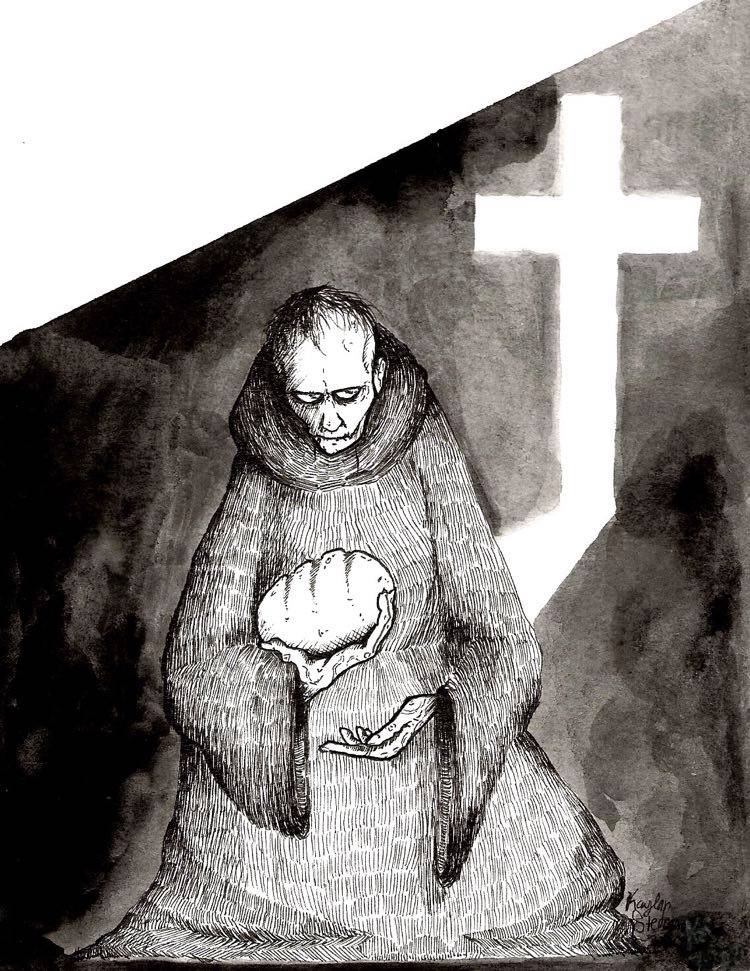 Malphus skulks through the crowded bedchamber toward the royal corpse. Death smells sweet and thick with rot.

Nobles and attendants back away as Malphus passes in his sackcloth. He finds monk’s garb most effective on gobbling days.

The priest’s voice is brittle. “His majesty already received his last rites.”

Malphus controls his impulse to smile. He nods at the dead king’s twisted face. “And did this bring him peace?”

The priest stands, unmoved, a red-robed rampart between Malphus and the king’s body. “The Church does not recognize your trade.”

Malphus raises his voice. “You’d let his majesty suffer purgatory? Or condemn his spirit to haunt the castle halls–”

The small crowd turns its gaze.

The king’s son Baron stands beside the corpse. He points at a round loaf resting on his father’s motionless chest. Baron focuses above Malphus’ head, avoiding his soul-stealing eyes. “Eat.”

“This is blasphemy.” The priest gestures about the room. “You’d have me excommunicate the entire company?” The crowd recoils, pressing against the tapestried walls. “He comes to cheat you.”

Prince Baron meets Malphus’ eyes for the slice of a second. Malphus darts his gaze downward, fast enough to give Baron room to deny the trespass.

“I offer my service freely,” Malphus says, “as I would for you, should I have the misfortune of seeing you so.”

Baron hesitates. The soot and rot of the dead king’s soul fill the chamber.

Malphus resists the urge to glance at the priest. The old prune moves aside at Baron’s command, but nothing would protect Malphus from the impudence of cursing the clergyman. However satisfying it would be to send him to hell, it is not worth Malphus’ life now.

Eighteen years of choking on sins of the dead and burning under the scorn of the living for this moment: the king has died. The pretender who’d stolen the throne from a just and levelheaded ruler, walled off the kingdom so that Malphus’ wife and sons were held at its borders till they starved alongside thousands, and taxed the people he’d vowed to protect until they, too, starved, plowing crops they’d never eat, worshiping at the altar of the king’s counterfeit crest, harvesting bitterness in place of food – the false king had died, finally, as all men do. Malphus would trade cursing a thousand priests to eat this man’s sin-soaked bread. He’ll be damned if he leaves it to the other Gobblers, dirty louts who gulp loaves like they never had a soul to lose.

Malphus stops beside the corpse.

The crowd holds its breath.

He crosses himself and lifts the loaf from the king’s chest. The scoring is exquisite: three lions carved into the crust. They belonged to the true queen, these lions. The king made her crest over in his own colors, hung on banners throughout the land. One marks the gate where Malphus bribed a soldier to smuggle Amelia’s and the boys’ bodies back.

However beautiful the bread, it cannot save him. The flour and leaven hide a sin Malphus will not carry.

Malphus raises the loaf. “I receive the unconfessed transgressions.”

He rips off the first bite. The creases around the king’s eyes relax as salt and ambition hit Malphus’ tongue. He wants to vomit. The king’s elder son had not died in a storm at sea. The false king had drowned the boy with his own hands when his new wife gave birth to Prince Baron.

Malphus slumps. I am a murderer.

He chews another hunk: taxes bled from blacksmiths and farmers, sent in secret to build the priest’s harem, in the guise of a convent, after the priest proclaimed the king to be God’s chosen line.

Malphus glares at the scarlet hem of the priest’s robe. Blasphemy indeed.

He wills himself to bear up under these damnable acts, now irrevocably his own. His stomach churls, but he eats on: slaughters, schemes, murders, intrigues.

With every mouthful, the dead king’s face grows calmer. The crowd leans in.

One bite remains. In his hand, Malphus holds the false king’s eternity. He’s planned this moment since the night he paid the soldier, placed three barley loaves on the heaps in the wheelbarrow, and, after eating his family heavenward, trudged two miles in the dark to bury their bodies alone.

Malphus presses the hunk of bread between teeth and cheek. Screams swirl about him, blurring the bedchamber. He strides among outcasts, cordoned off by his hideous wall. He points out who to sell, who to send to the harem.

Malphus lunges for the cup, but Baron steps aside. Malphus hits the stone floor. The Prince leans over him, shoving a finger in his mouth, fishing for the king’s last sin.

Baron pulls a dagger from his belt. He holds the blade to Malphus’ throat.

“I will not be haunted,” Baron’s voice snakes through Malphus’ brain as he, through the greedy gaze of the king, spots Amelia.

Malphus’ own hands, jeweled in rings stamped with a stolen crest, toss the twins from Amelia’s grasp and rip at her muslin. Malphus wretches and convulses.

In a final heave, Malphus spits out the cursed bread. It spatters across Prince Baron’s cheek, a slop of black mush.

The prince swipes the mush with his free hand. He slathers it across Malphus’ lips, but Malphus keeps his mouth closed tight.

The Gobbler leans into Baron’s dagger.

But blood gurgles over the blade.

Blood paints the wreckage of the Sin Eater’s throat.