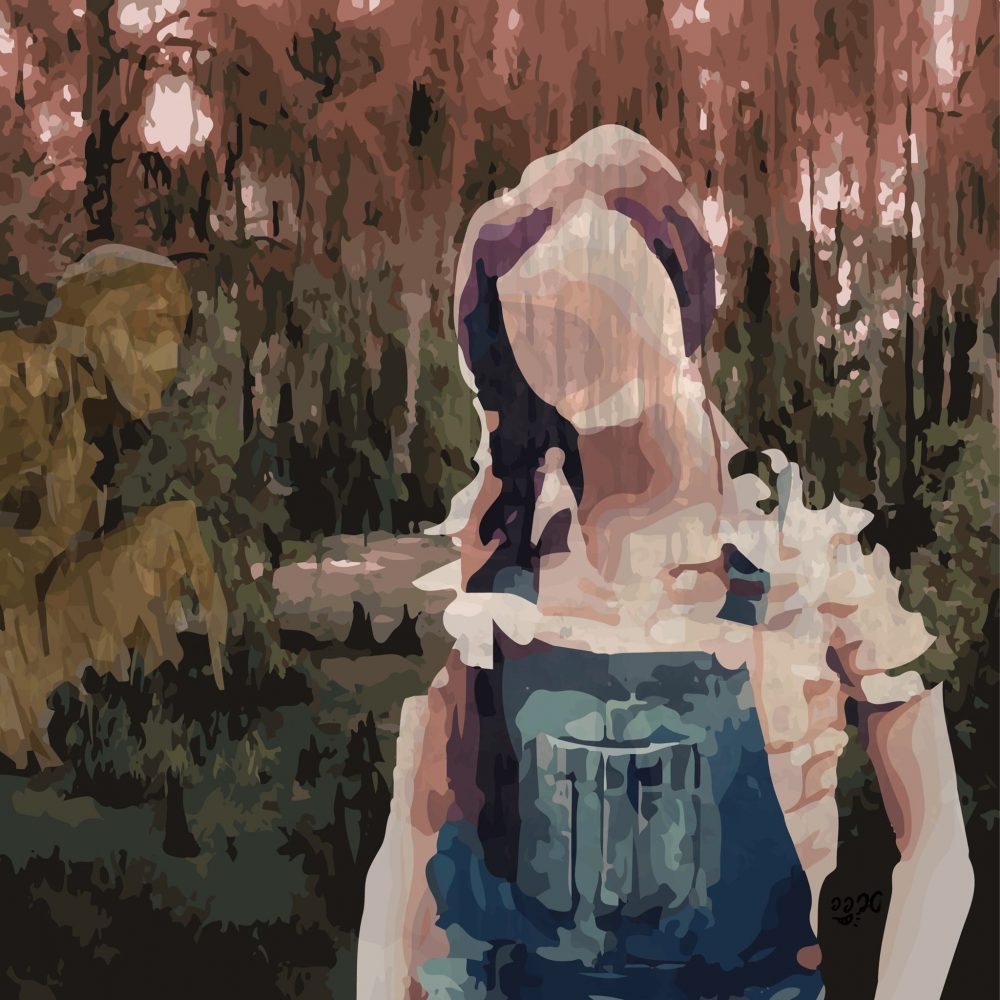 This was not what Landry expected when her uncle said he was going to show her what “real Florida” looked like. She expected pastel sunrises on the seashore. The sand between her toes while she collected scallops where ocean met land. Maybe shaved ice and a hammock nap while the sun beat down. As the sun sunk below the horizon, perhaps she would help her aunt steam freshly-caught lobsters for dinner. But instead, there was this: a dirty field, dirty horses, dirty cows, even the dirty dog Benji at her ankles. Landry wrinkled her nose. It would take years to get the stink out of her hair.

When her aunt saw that all Landry had brought in her suitcase was a rainbow array of bikinis and floral loungewear, she tutted and dragged her niece to the second-hand store to select some dingy overalls and long-sleeved shirts to protect her skin from the sun and long, serrated grass. Landry begrudgingly wore those garments as she meandered the path between the stables and the cattle field. The dog dutifully followed.

“There are orchids in the swamp,” her aunt had told her. “The most beautiful you’d ever seen.” Landry was determined to find them. At least something in Florida should be beautiful.

Her uncle winked at her as she headed out on her mission. “Watch out for that swamp ape,” he teased.

The bells around the cows’ necks clanged as they munched under the afternoon sun. Landry kept her distance after having slipped and fell into a cowpie the day before. A horsefly buzzed by her ear and she swatted at it, sour-faced, as she trudged through the tall grass and toward where the prairie met water. The dog pranced in and out of the water, splashing and yapping. Landry watched the water’s edge for alligators–her uncle had warned her that she should run away in a zig-zag if she saw any–but she figured a gator would rather get the dumb dog over her any day.

Cypress and mangrove trees held the earth to the water. Landry steered clear of the liminal space, clomping her aunt’s boots in the mud as she searched the razorgrass for flower bulbs.

Benji growled at a figure kneeling at the water’s edge.

“Benji!” Landry admonished the dog. He let out a huff before retreating to Landry’s side.

The figure’s skin, rough and cracked like papier-mâché, was the color of deep clay. They wore a skirt of woven palmetto leaves browned in the sun. Pleated long black hair ran down their back.

Landry approached slowly until she and the figure were close enough to share breath. The dog held back, offering a low growl. The figure’s long eyelashes rested on their cheeks. Their mouth barely parted open. Landry couldn’t tell if they were a boy or a girl–they were much younger than she was–and she marveled at their absolute stillness.

A blue heron took flight not far behind the statuesque figure. Landry watched its long wingspan skim the rippled surface of the large lake. It passed in front of another dark figure–this one wading waist-deep among the mangroves. This figure–with a flat chest and wide shoulders–wielded a harpoon spear, poised to strike. Red and white paint framed his face and forearms. A handful of feathers were tied into his black hair, which had been pulled up into a bun. Strings of shells coiled around his neck and wrists. The palmetto shift around his hips left nothing to the imagination. Landry felt a tightening in her chest and a stirring farther below as she studied his silhouette. Her cheeks flushed as the setting sun behind him cast the sky into vibrant pinks and oranges. A chorus of crickets started their evening song. His grip on the spear held strong.

Benji barked behind Landry. She spun, tripping over her own feet and landing butt-first into the muck behind the child figure. A third figure rested against a cypress tree.

“Benji, stop it,” Landry said. The dog pushed his ears back and whined.

The figure’s long, black hair hung in loose waves around her shoulders and covered her bare breasts. Her darkened skin held the same hard, papery texture as the other two figures, but her eyes were open–an inky void from lid to lid. The figure gazed down toward the knee of the cypress, where its roots spread out above the waterline. There sprouted several braided husks of leaves and a cluster of wild orchids. The flowers were surprisingly ugly with their ostentatious yellow petals splattered with brown like an overripe banana.

Her uncle’s voice, brassy and loud, called from across prairie. “Laaaaandry,” he called. “Supper!”

Benji’s tail wagged at the familiar sound and he set off, running through the thicket at the promise of food.

The sky shifted to purples and the evening star shone bright on the horizon. The woman offered Landry her hand. Landry took it, impressed at the supple warmth of the figure’s treebark skin. In the shadows of dusk, she couldn’t make out if the figure changed her expression in response.

A splash at the water’s edge split Laundry’s attention. When she turned to bid the woman farewell, the figure was gone. In her place stood a tall oak. Landry’s hand remained ensnared in its branches. She looked back at the other figures: tree stumps in the growing darkness. Treefrogs croaked. The water glittered around a dark lump on the shore.

“Benji?” Landry asked. But she knew better. The damn dog was gone, and now some Florida swamp ape was out to eat her.

The lump let out a deep, rumbling bellow.

In the rising moonlight, Landry got a better look. A crust of thick, armored scales. A long row of sharp teeth. Her shrill scream pierced the night.

At least some things in Florida could be beautiful.