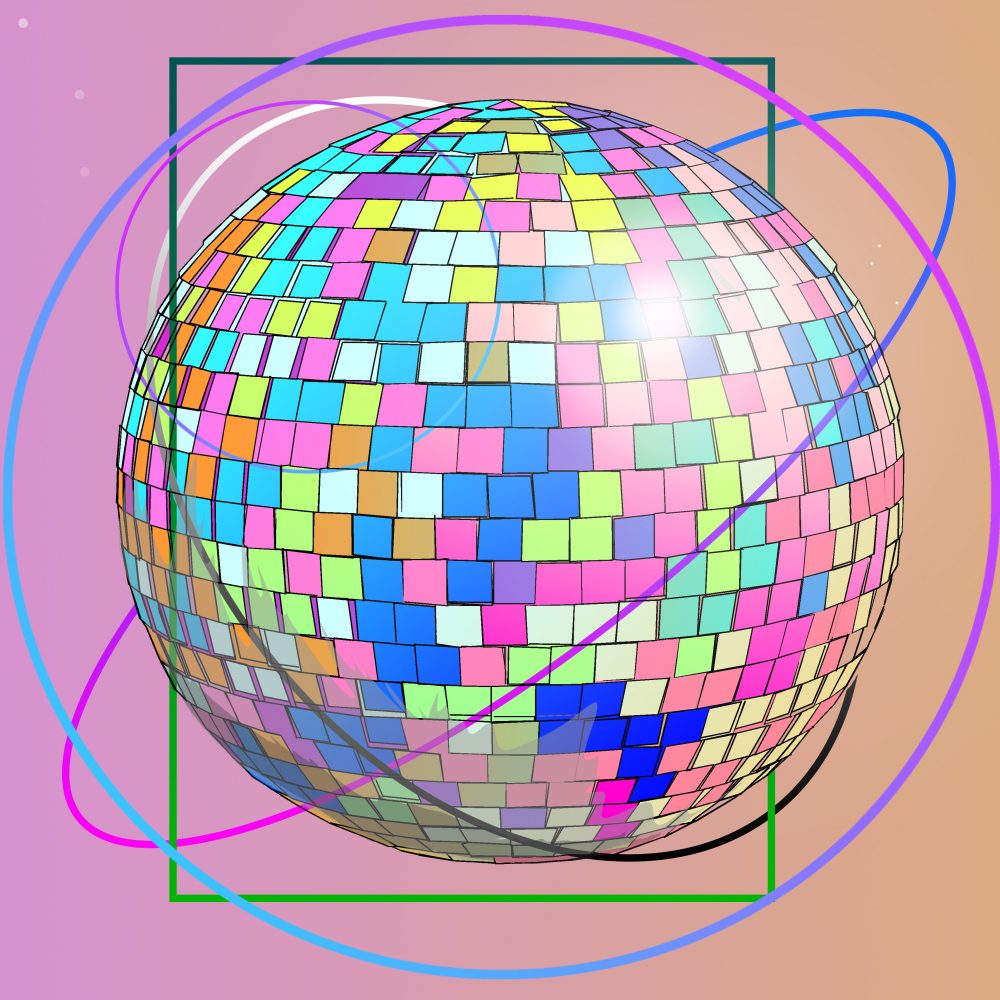 Neil was a strong man. His arms barreled out with knotted muscle. He wore his onesies proudly. For lounging around the house he sported any solid color. They were good for naps and for yoga. For special occasions, he wore sequins.

It was on one such occasion that he spotted Neyla.

Neyla had changed her name from Marjorie some time ago, because she felt it did not fit into the fanny pack of her soul. Her rural Ohio beginnings were not who she was either, so she escaped for the mecca of this twinkle-lit city, always covered in fog. A series of odd jobs and meditation retreats had led her here, to this dance floor, where she felt her most luminous self. She rubbed the bangles on her arms, then threw her arms up in gratitude for She above.

Neil caught the arc of her out of the corner of his eye. The sea of half-naked bodies parted.

Neyla glinted like the Playa at Burning Man under the now-you-see-me-now-you-don’t sparkle of a disco ball. She grooved like a well-trained snake, then locked eyes with Neil across the dance floor. Neil shimmied over to her, making sure the light hit the most flattering spots of his onesie. She swung her head around and her hips followed in a semi-circle so Neil could see the plump outline of her bottom pressing against her floor-length skirt. She made unmistakable eye contact over her shoulder.

Neil held cactus arms up in the air and rocked his hips back and forth, careful to keep at least a three-foot distance from her. Again, she held his gaze, then pounded her feet in a faux flamenco step, within the vicinity of his arms. She turned around to excavate his spirit with her eyes. He hoped she would find what she was looking for.

She must have, because soon she was moving her arms in an ocean-like motion and sashaying towards him. He paid homage to her decision to dance by mimicking her move. They rocked back and forth like the very tide itself, under the full moon of the disco ball.  Neil felt the strength of their psychic connection pulling them towards each other, over and over. The song ended, and Neil gently pointed to the tea station so that they could talk. With a flicker of a smile she consented, and stepped with bare feet off the dance floor.

With a loving look, he handed her a thimble of green tea. The sun of her face rose to meet his.  “Is that lavender I smell?” Neil asked. Neyla batted her eyelashes, “Why, yes. It’s an essential oil I made myself.” Neil smiled, making sure to deeply explore the browns of her eyes. He knew the gathering did not allow scents, but he would let it slide.

“What is your inner Goddess telling you right now?” Neil asked.

“That I am the most radiant beam of light,” she said, opening her arms out and expanding her chest as if to give him proof.

His face grew very serious. “I honor that,” he said.

Thus was the beginning of N&N, a match made in the heaven of mutual loving. After a few months of gentle courtship, they moved into a battered Victoria together.

For a while, life was a steady stream of farmers markets and pickling parties. Then, she saw him sitting at the kitchen table with The Carton in his hand.

She threw a handful of homemade granola in his face. “Soy milk?! Really Neil?! You KNOW the mass destruction of the soy industry!”

Looking back he thought perhaps he had deliberately sabotaged things. Somewhere in his subconscious he must have known the match wasn’t right. She was sauerkraut and he sweet potato fries: the two just didn’t mix. Slowly, he watched Neyla’s root chakra turn from red to pale pink, until finally, all of her was gone. The only evidence of their love was a forgotten bottle of Doctor Bronner’s in the shower. The lavender scent.

For a little while, he was glum. Wore a deep blue onesie to match the shade of his soul. Then one day, the sequins in his closet called to him. He found himself spinning in front of his mirror, prisms of blue, yellow, and pink light illuminating his room like Christmas ornaments.

He hopped on his steel steed and made the pilgrimage to the dance floor. As he slithered between bodies he saw her, Myra, formerly named Janet, glistening like a mermaid under the lights’ rhythmic pulse.

Rosa Boshier is a writer whose work spans multiple genres. Her work can be found in publications such as Entropy, The Rattling Wall, and New Delta Review, and staged at LA/LA Pacific Standard Time and The Mission Cultural Center for Latino Arts. She earned her MFA in Creative Writing at The California Institute of the Arts, where she also teaches Latinx Studies.