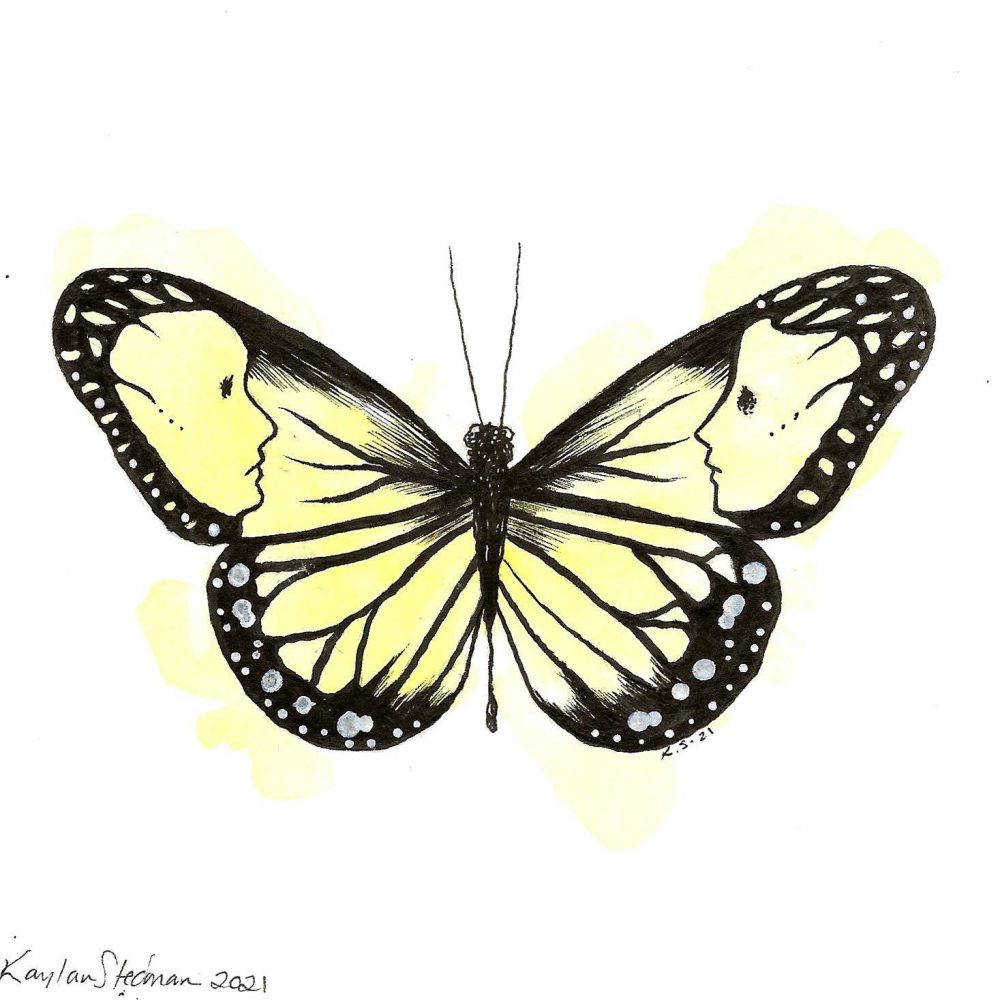 In Kansas, we kill a hundred butterflies. We know it’s a hundred because our daughter counts the stains on the windshield, yellow wings turned to yellow sludge. “It’s a migration,” my wife points out. “Happens every year.” After seventy-seven, we pull to the sunflower-lined berm, watch the butterflies pass. Other travelers whiz by, decimation en masse. We drive on, taking it slow, but slow is not slow enough and we add to the toll, our daughter tallying until our intersection ends.

Downtown Dodge City, we watch cowboys pick each other off as we sip sarsaparillas and Google steakhouses for later. A waft of manure permeates the attraction. The young man who sold us a keychain twenty minutes earlier falls in front of us, winks at my daughter, then shuts his eyes and settles into dust. After, my daughter asks the sheriff to autograph the free photo he’s just handed her, pointing out he killed fifteen men with a six-shooter. We skip the steakhouse and get snacks at a gas station, M&Ms and jerky and assorted teas. We stop at a historical marker for a wagon train route and my daughter asks if the settlers killed the butterflies, too. My wife says they did, how she’s astute to make the connection, that there’s always been death.

Somewhere along this highway is a windmill factory. Every half hour, we see the flashing lights of the wide-load truck, followed by an enormous propeller or neck stretched across the bed of the longest vehicle we’ve ever seen. My wife points to the erect windmills in the fields and tells our daughter to make the connection, how small they are on the horizon and how different they are up close. Our daughter calls the windmills prairie fans and I say that’s a perfect name. She asks why it’s still so hot, why the fans aren’t working, and I say that’s what’s happening now, that they’re setting up more, that it will be cooler for our drive home. My daughter says, “Oh, good.” My wife’s look says I should tell the truth, a conversation we’ve had before. We’ve passed eighty-six prairie fans on the passenger side, but my daughter doesn’t know how many on the other.  “I can only look out one window at a time,” she notes, and promises she’ll get the others on the way home.

In the hotel, we order pizza. My daughter falls asleep on her queen before it’s delivered. My wife says she’s not hungry and disappears for a bath. I eat six of eight slices and guzzle an entire 2-liter. I join my wife in the little bathroom and strip. I try to wedge myself across from her, a game of claustrophobic Twister. Water spills everywhere and I kick my wife three times. “What do you think’s happening here?” she says. I tell her Katie is asleep, the TV is on loud, and the bathroom door is locked. “You can’t be serious,” she says, and I laugh like I’m not serious. We sit, my wife with a washrag over her eyes and me watching for her nipples to bob above the water—I see the left eleven times and the right nine. Pruned and cramped, we stand at the same time—most of the water is now on the floor—and for a moment, our bodies touch, slide against each other without breaking contact, a feeling from long ago. We kiss. I move my hand down, past her back, and she says, “No, not the night before the funeral.” She steps out and leaves the room, closes the door. I hear her say something to our daughter, who is awake. I pull the curtain shut, turn on the shower, and shampoo, as if that had always been my intention. I feel the fleeting flash of my wife’s body slipping against my skin. I can’t recall the last time that’d happened. I realize how there’s always been a funeral, remember that there’s always been death.

Michael Czyzniejewski is the author of three collections of short stories, most recently I Will Love You for the Rest of My Life: Breakup Stories (Curbside Splendor, 2015). He serves as Editor of Moon City Press and Moon City Review, as well as Interviews Editor for SmokeLong Quarterly. In 2009, he received a fellowship from the National Endowment of the Arts.