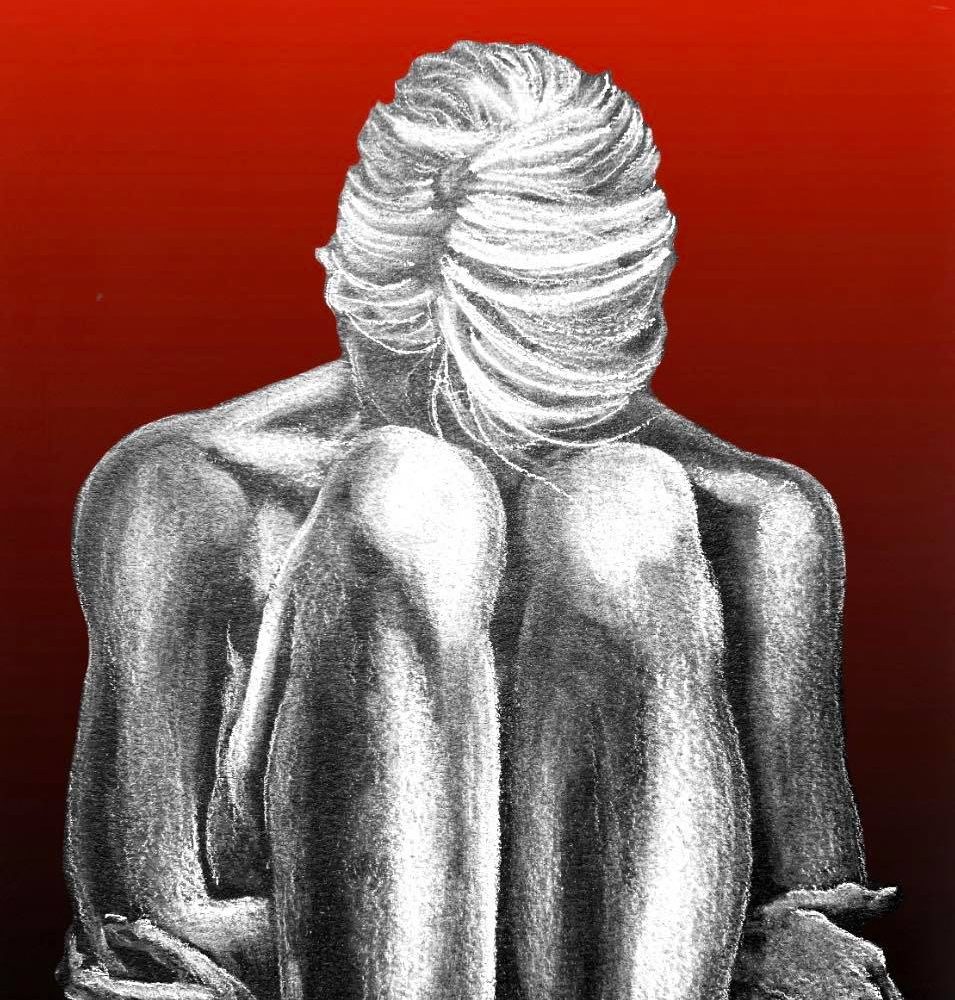 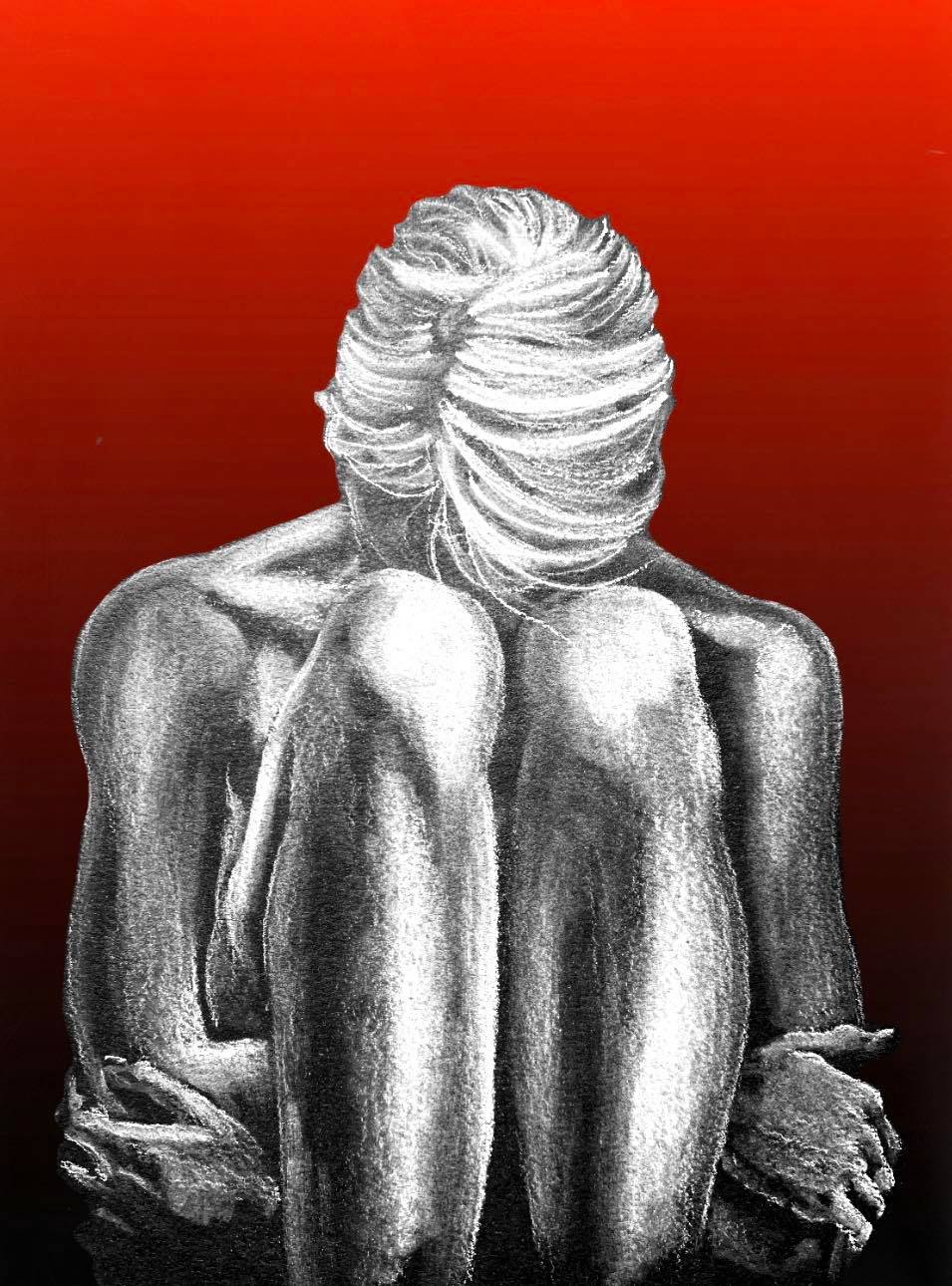 Ingrid took me to her favorite dive bar to the deliver the news over lukewarm beers and popcorn. “I have decided to give up red,” she announced. The way she said it, without the contraction, made her sound like a drunk trying not to sound drunk, which she occasionally was, so I ignored her and signed us up for a pool table.

But she was serious. I woke the next morning to an email instructing me to wear something red when I came over. She wanted to test the efficacy of the red detector she’d invented. (Ingrid picked up grants the way other people picked up their dry cleaning.) It took less than five minutes to search my studio apartment to confirm that I didn’t own a single piece of red clothing, so I bought a red beanie at the drugstore and hurried to her place. In the door where the peephole used to be she’d installed a contraption connected to a phone. When I knocked, my headache went from bad to vicious as klaxons sounded and blue lights flashed. Ingrid opened the door, grinning, camera in hand. “Documenting before the purge,” she said. “Leave the hat in the hall. It’s ugly.”

I’d been her assistant for two years. She was my first performance artist-slash-inventor, and when I took the job I hadn’t realized so much manual labor would be involved. By noon, I’d run up and down the stairs a dozen times, filling boxes with banned items: smoke detectors, coffee mugs, bourbon, guitar, two cases of wine, silk scarves, umbrella, Tylenol, toothpaste, deck of cards, two dresses, five shirts, seven pairs of underwear, one cashmere sweater, gochujang, salsa, canned tomatoes, paprika, a box of rose-infused tea. She refused to replace any of it, except the toothpaste, because I pointed out her gums would bleed without it. Knives and razors, scissors and corkscrews—anything sharp enough to draw blood—went into the boxes. Books with red covers that I didn’t want she instructed me to donate. Record player, television, toaster, coffeemaker: gone. At least the display on the microwave was green. I argued that she should tape over the red lights on the stove, but she insisted it had to go, so I dragged it away from the wall, not caring when it scratched her hardwood floor.

When I finished, her apartment looked like it had been ineptly robbed.

On November fourth she closed the blinds (cars, ambulances, cardinals, sunsets), handed me her phone and laptop, shut the door, and the yearlong piece began. The time frame was arbitrary, Ingrid explained. “It’s the process, of course, the denial and the restoration.”

After the shock of the confinement passed—three times in the first week she called me to come over, then forgot what she needed—she adapted fairly quickly, reading, taking notes, documenting red’s missing place in her life. She allowed herself visitors, provided they passed the red detector. Of course the piece couldn’t be a solitary effort. Thoreau’s mother brought him pies; I brought Ingrid groceries, took away her trash and recycling, maintained her website, sorted the mail, reported the news. We even made plans for a cocktail party, before Ingrid decided it would undermine the seriousness of the piece.

After five months, she said certain smells were red, and sent me to buy incense.

At eight months some sounds were red too. Sirens, of course, but also singing, coughing, and low-flying helicopters, which she described as a deep, thumping maroon.

At nine months, I discreetly contacted certain favored journalists, who came to interview her (pencils and notebooks only). A few blogs picked up the story from the art press, and for about a week I lived at her apartment, calling building security to remove people who tried to get past the red detector.

During those days, being cooped up with Ingrid was difficult, but not as difficult as pining for red.

I’d never cared for the color before, but now I couldn’t stop craving red. That night in November when she shut the door, I went to a diner and ate one slice of fluorescent cherry pie after another. I slept in Ingrid’s vermilion cashmere sweater. I ordered redcurrant jam from Paris, scarlet ink for a fountain pen I didn’t own, seed catalogs to gaze at the heirloom radishes and watermelons. For the first time I bought Christmas decorations for my own small place, huge velvet bows and yards of red tinsel. In the mornings I bought flowers instead of coffee: tulips, anemones, carnations, roses, zinnias, mums. I dreamed of sacred hearts carved from rare steak.

I started to think that the real subject of the piece was me, not her.

One September morning, ten months in, Ingrid called me, frantic; the detector that kept red from infiltrating her home was broken, the motion sensor down. She was in the bedroom with an eye mask on, and her nose was dripping, maybe blood, she couldn’t tell and goddamnit what was she paying me for?

I hurried over, pursued street to street by the apples I’d pored over in the supermarket, their afterimages leading me into Ingrid’s apartment. There wasn’t much I could do about the blaring red detector, except flick the emergency off-switch. I was shaking, giddy: the piece could end right now. I could rid myself of this obsession with red.

In the bedroom I found her huddled on the floor, breathing in shallow rasps.

There was no blood anywhere, not a drop.

And I was glad, because I couldn’t be sure I wouldn’t lick it right up.