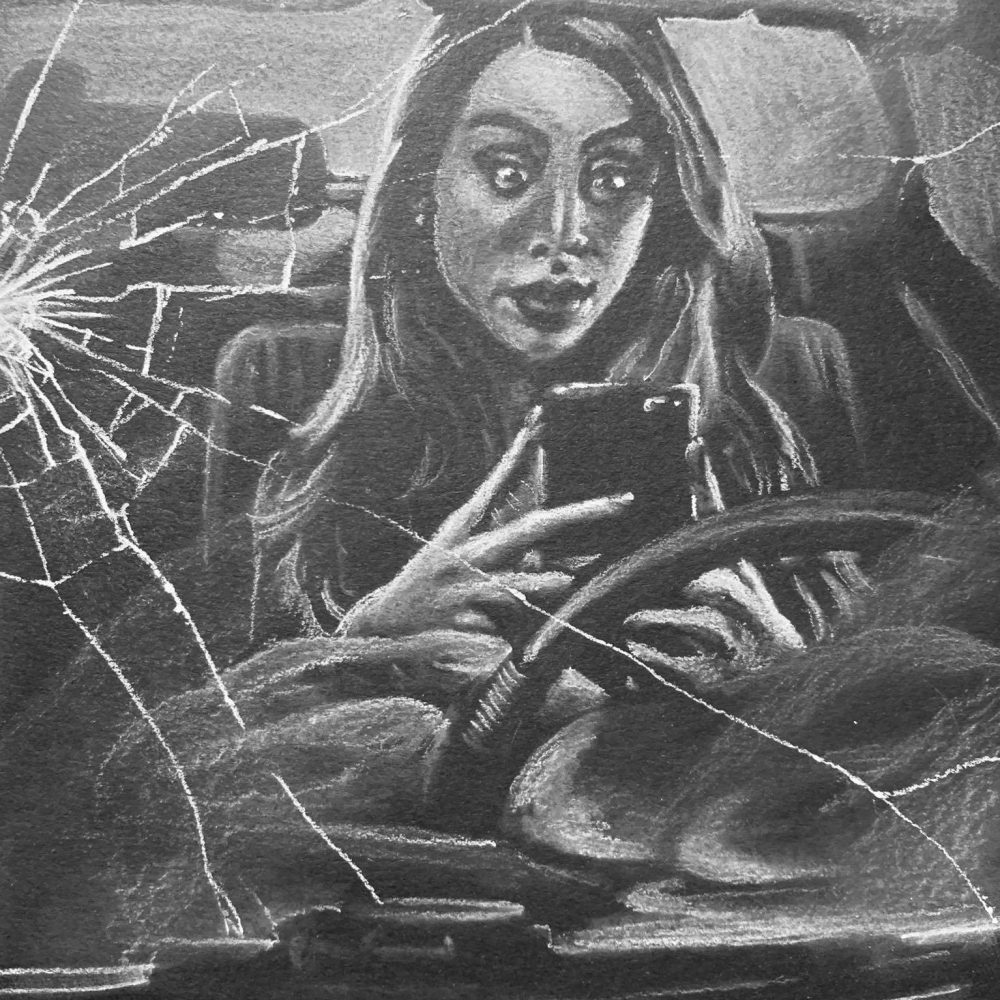 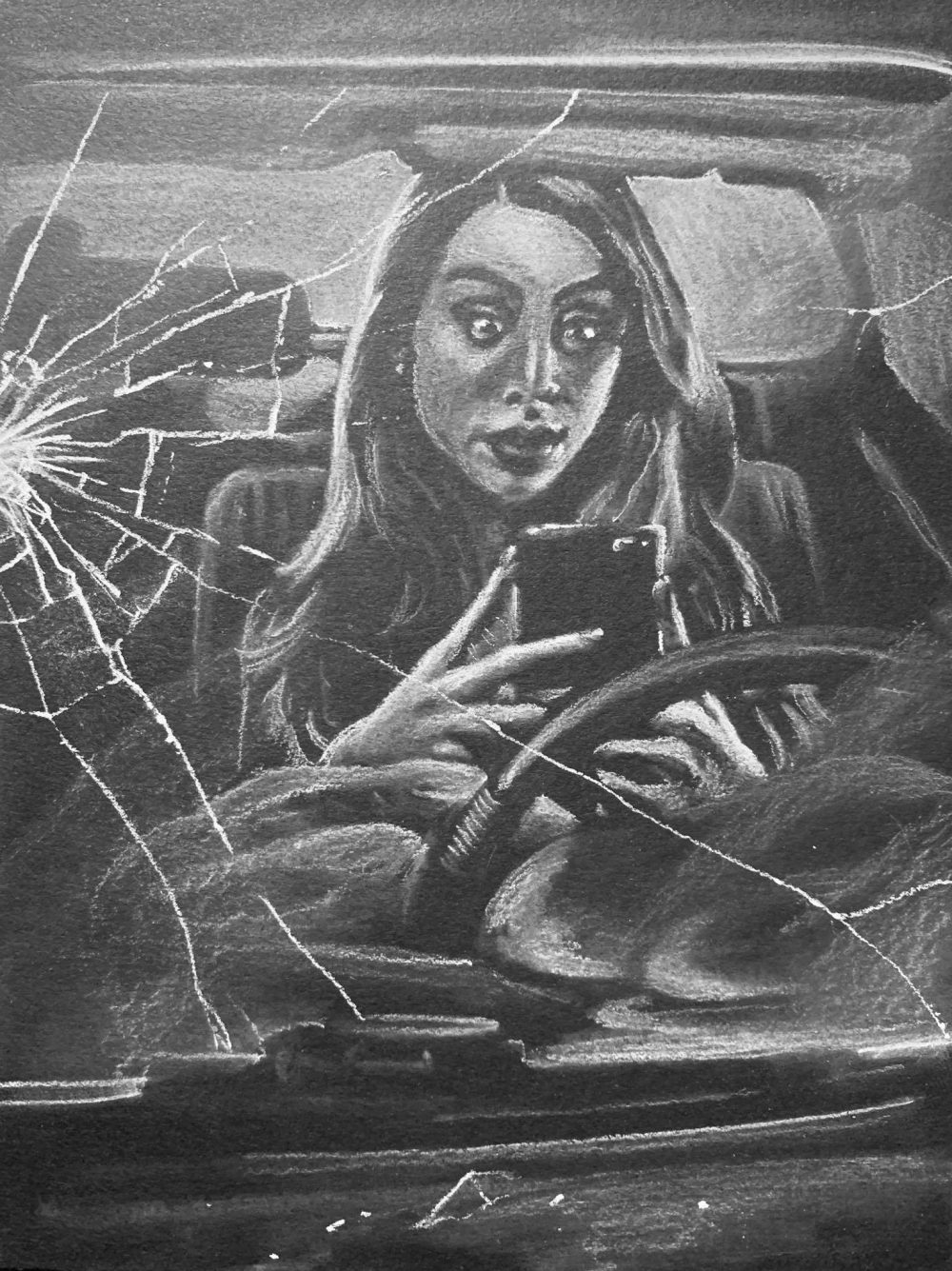 Texting at the wheel, I rammed into the car in front. The sound was jaws of steel and glass, long and concertinaed. There was the wallop of car bodies – my Ford and his Merc – and then crack, split and buckle.
Nobody was injured.

Gemma: Jake and I haven’t had sex for 14 months.
Gemma: We’re starting therapy at the Create Centre.
Me: Create Centre?
Gemma: Therapy place nearby. Working around communication and intimacy. Meeting up now to go together.
Me: Sounds good
Gemma: What’s happening to me? Hormonal? Used to be all toughness.
Me: Still doing your painting?
Gemma: Yeah
Me: Nice

Because I’d texted that pointless ‘nice’, perhaps one letter too many, my gaze was too low for too long. Had I sent ‘OK’, a smiley, or not replied at all, then what?

It’s hard to remember what I first registered. The tail lights? The car in front shifting forward a metre on impact? The raw-boned, smelly-looking driver springing over his own shoulder like a hyper-alert forest beast, to inspect his car. Or the look and insult shot my way by this sweaty figure, informing me that now, I was his enemy.

I did not move from my seat.

It was Ramadan traffic, the traffic where accidents proliferate with the hours of heat and thirst and gassy acids gurgling below. There was zoning-out because the city’s collective belly was parched empty, which leads to all manner of other-worldly states, each conducive to what is known universally as UNROADWORTHY.

I didn’t fast but was nonetheless unroadworthy. Perhaps because of the catching nature of communal zoning-out or maybe I’m the somewhere-else sort, here-and-now being far less curious and beguiling than the places I go with my mind, and the people with whom I go, and the way we behave and the things we say. Maybe I was in my somewhere-else and didn’t look soon enough, didn’t press the brake fast enough, didn’t anticipate.

It is said that the world outside our brains is only a series of particles and force fields whirling around, between, among each other. The rest is invented inside the skull. Representations, interpretations, versions. This means that colours and tastes don’t exist independently, no more than borders and perfection and tedium and spiciness and melody and love.

I deliberated this while watching the sweaty-man taking in the car damage before turning focus on me, the perpetrator. I didn’t move. Not an inch.

I was stationary with oh-fuck shock but more because the car sticker affixed above sweaty-man’s bumper warned ‘DON’T TOUCH MY CAR’. It was illustrated with a figure holding a baseball bat above another figure, kneeling, head bent. The stance of executioner and condemned.

The moustached motorcyclist nearby, bored with monotone commute, strolled towards the scene. It was utterly unrelated to his own existence but nonetheless a change in the pattern, the routine. He joined my newly-acquired enemy to study the damage. Glancing momentarily at me, they transformed into a duo, a team, a pair of adversaries.

Instinct dictated that I lock the doors, shield myself from impending wrath and punishment. My new enemy surged at my window, initially ordering I get out, then bellowing threats and banging his keys with sharp stabs at the window. But I sat tight because maybe time would bring me a saviour, a messiah, and really, I was scared.

Traffic pushed around with indifference and enemy-man went back to collude with biker-man and they clearly agreed on things, unified by fasting or maleness or the notion of injustice or God or fatigue.

They conspired and returned. Biker-man pressed his moustache to my window and smelly-man pulled at the door handle. I could hear their shouting was loud, but my louder mental voice repeated DON’T GET OUT, DON’T GET OUT. It boomed within my skull because my heart was pushing. Heedless traffic shoved past.

Gemma: Jake says he’s read a book that’s given him the courage to leave.
Gemma: We got to therapy and he bolted.
Gemma: He looked like someone I don’t even know. Even his voice was different.

The world may be imagined but it’s innate to believe otherwise. Everything we know about situations and individuals is created, no matter what we see in them, hear coming from them.

Motorbike-man, enemy-man’s ally, took his phone and dialed. He didn’t speak into it, meaning (presumably) nobody replied, while looking straight at me in (perchance) an attempt at menace. Who was he calling? In all probability the insurance company or police who wouldn’t answer because it was close to fast-breaking hour. Meanwhile, enemy-man tried opening his car boot to (perhaps) extract a crowbar with which to smash my window and possibly my head as I knelt in disgrace and repentance. But his boot had been jammed shut by the collision.

Gemma: I can’t believe it’s him…
Gemma: He was supposed to be the stable, loving father and partner
Gemma: He’s blank when I talk to him…

I didn’t move. I would never move.

Everything twirls and bumps in series of collisions. It may be random but we try imposing sense on the accidental. Force fields push and pull, none of them predictable. Search out dependable logic and when you glimpse it, it will vanish, snatching any capacity to foretell, to plan, to understand, to expect.

The scary-man-duo were bags of fired-up molecules pushing and colliding to a wild boil. I wasn’t supposed to collide with either of them, according to probability statistics. I searched for the source of this bewildering chaos, texting the word ‘nice’, a word with too many letters and little meaning, all in response to Gemma’s perplexing unforeseen, her not-part-of-the-plan. But everything carried on regardless, and took me with it.

Olivia Gunning's fiction has been published in The Forge Literary Magazine, Pithead Chapel, Hobart, and Monday Night, among others. She has lived, worked, taught and written between Morocco and the UK for near on two decades.