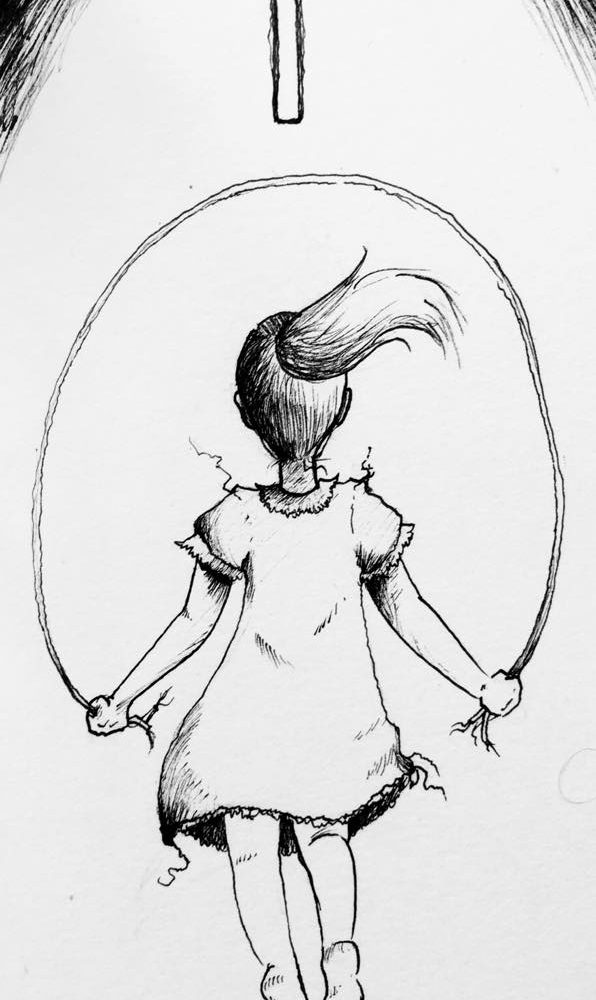 In a crumbly brick building near the edge of the city, Emily Rose ended the summer of 1988 by taking control.

She’d lived in the same apartment for all her memory. Her father, a police officer held in high regard, had headed the neighborhood watch.  He’d worked to keep undesirables away, appearing whenever the superintendent showed empty apartments, asking lone women whether they had children, and if they did, where was the children’s father?  No one told him that he could not ask these questions, though Mrs. Phillips from downstairs once suggested more tolerance.

“We must not,” he’d rasped, his voice impressively grave and graveled, “welcome that upon which morality frowns, lest we be tarred with the same brush.”

Emily’s life was church and home.  At home, she would study the lessons her father set. Outside, she would jump rope with lengths of cut telephone wire.  Once, a girl had asked to jump with her, and taught her a jumping rhyme.  She showed her father, and he went to the girl’s apartment.  His voice echoed back with words like “amoral.”  No one played with her after that.  At church, they sat in the front pew, “amened” when prompted, and paid tithes.  Her father’s presence formed a barrier no one tried to pass, so that she moved through the sanctuary surrounded by an invisible electric fence.

He said he would send Emily into the arms of the right man at the right time.  She turned thirty, without the right time or man coming along, and then, that August, her father died.  He went from being her father to being a body that men took away, and then she was alone. She made herself a peanut butter sandwich.  She climbed into her father’s bed.  His pillow was still flattened in the middle, and there was a long sag in the mattress where he’d lain. She remembered, suddenly, the crowbar beneath the bed.  If someone broke in, he said, they would face his iron wrath and judgment. She put the crowbar under her father’s pillow, and then she felt as though he were there.  She pressed her hand in the hollow and went to sleep.

“I need to know you’re okay!  I’ll have to call the police!”

Emily undid the lock and the deadbolt, but not the chain.

“Oh, dear, I’m so sorry.  We all really truly respected your father,” Mrs. Phillips sighed.  “I’m headed to the grocery.  Do you need something?  Make a short list, dear.  Ryland is visiting; he’s taking me.  You know about Ryland.”

Mrs. Phillips spoke often of her sweet firstborn grandson, who’d grown into a bad crowd despite his father’s guidance, and broken her heart with his descent into drugs and thugs and “all that mess.”  Emily’s father would not want to be tarred with his brush.  She made a quick list—bread, milk, applesauce, peanut butter—while Mrs. Phillips kept talking.

“He just came up to spend a little time with me.  Ryland, this is Emily Rose.” She stepped aside to reveal a statue. Carved curves of muscle stretched the fabric of his tank top.  Only his eyes moved to flick over Emily once before returning to stare at the floor.  Emily handed Mrs. Phillips the list.

“We’ll go on then.  You just rest, dear.”  She started down the steps, keeping a firm grip on the bannister.  Ryland stood, staring through the crack at Emily.  She stared back at him and his muscles and his dead face.  Suddenly his mouth grinned.  He looked at her for one more beat, then his head whipped around and followed his grandmother down the stairs.

Emily went to the bedroom window, so she could watch them walk.  The rusty fire escape blocked part of the view.  She pressed her forehead against the glass and stared down at the baked asphalt until heat waves and tears blurred her vision.  After Mrs. Phillips returned, Emily made herself a peanut butter sandwich.  When the streetlamps turned on, she climbed into her father’s bed and went to sleep.

The sudden absence of light woke her.  Through cracked lids she saw the shadow of a massive bird of prey.  It stretched and preened, spread a wing and long neck into her window.  It unfolded its shadow into the room and became a man who crept toward the bed.  She heard the creak of loose floorboards.  She listened as he walked to the dresser and began rifling through the drawer.

She slipped the crowbar from beneath the pillow and got to her feet.  Now she was fast.  She lashed out hard, catching the back of his head.  He cried out, but she hit him again and again, and he fell back, silent, onto the bed.

She did not know what should happen after the iron wrath and judgment.  She poked the hard crescent of his shoulder.  She looked at the spikes of his closed lashes, the square of his jaw.  She thought that she would like to keep him.  This was finally the right time.

She got her father’s duct tape, and the leftover coils of telephone wire.  She struggled to lift his feet and tie them to the footboard.  She stretched his arms and tied them to the headboard, straddling him to get the right angle.  When he suddenly began to move he nearly threw her.

“Get these off me! Let me go!” He thrashed against the bonds, but then he groaned, turned his head and vomited over the side of the bed.  Coughing and retching, he struggled to catch his breath.

She ripped off a length of tape. “Hush.” Her voice was quiet.

“I just wanted the money! I wasn’t—just let me go!”

“Hush,” she repeated, pressing the tape firmly over his lips.  “You stay with me.”  She patted his cheek.  “You stay.”