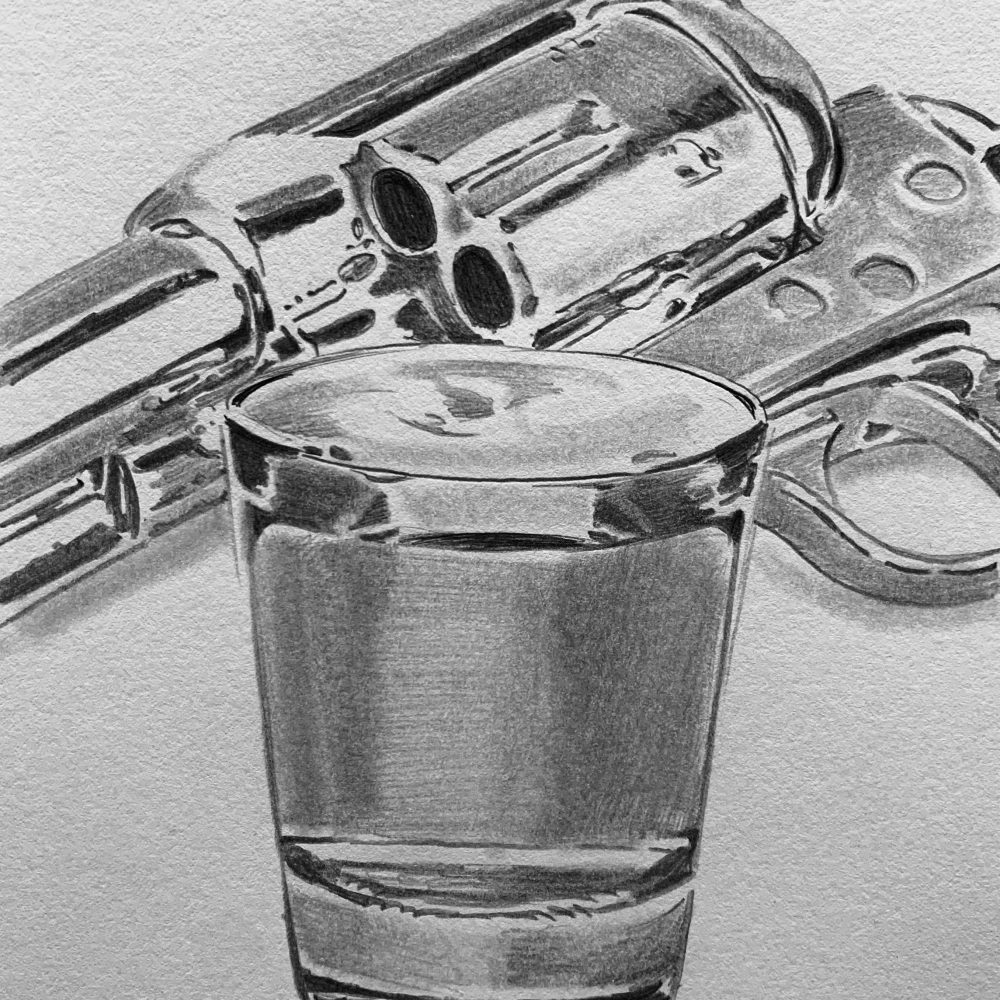 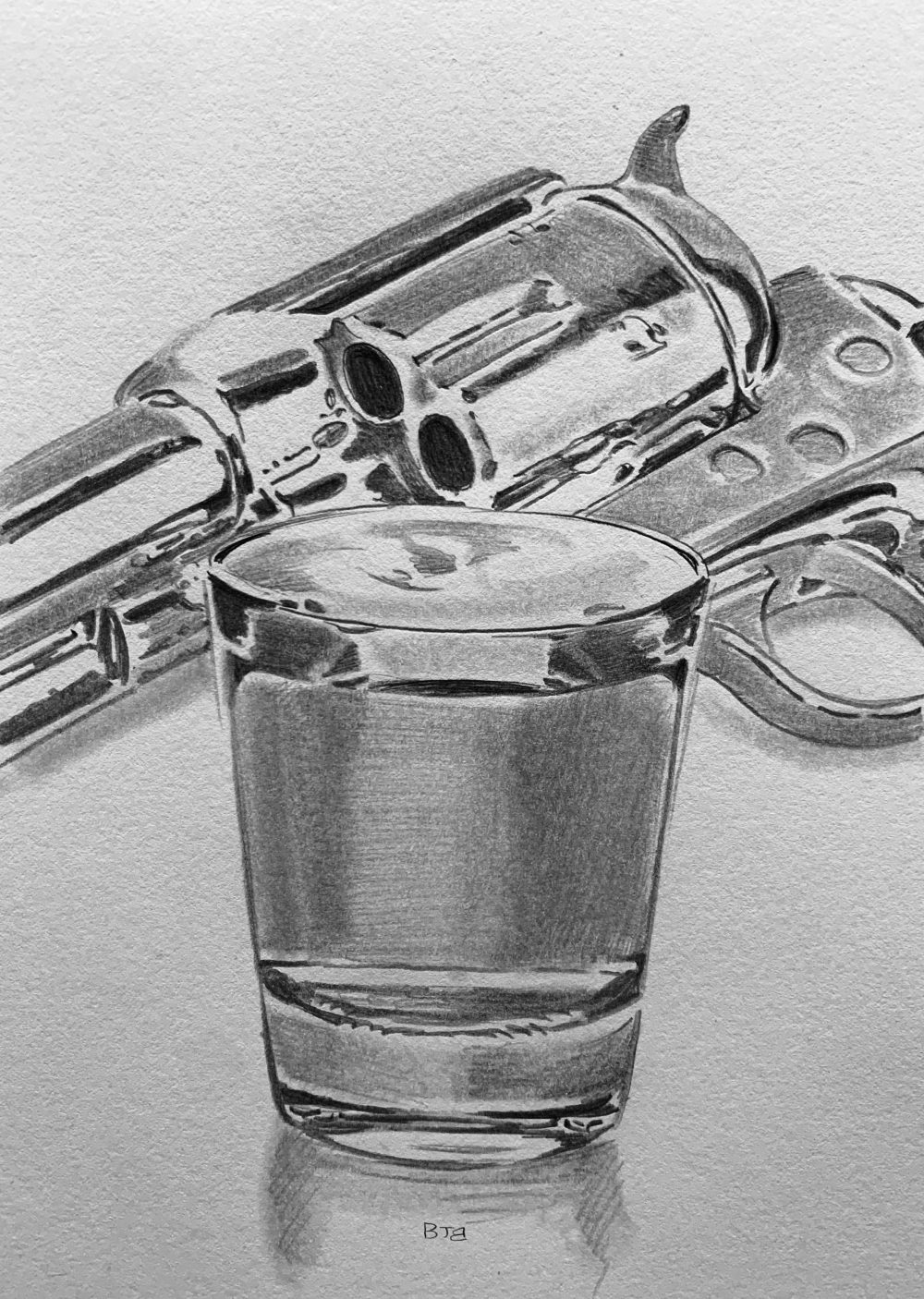 Bill Posters set his teeth on the bar. He could talk fine without them. I set his Lonestar longneck and shot of Garrison Brother’s bourbon in front of him. Willie was singing Patsy on the jukebox—I’m crazy for trying and crazy for crying—warmed our Saturday afternoon. Agitated, shaking, silent, Posters pulled his polished Colt out of his inside pocket and set it on the bar beside his booze.

“Fire ants are driving me mad.”

“Now Bill, you know the sign on the door, side-arms ain’t allowed here.”

“I was gonna shoot myself in the head, but I wanted a last drink first.”

“Don’t spout silly. Anything you want to see on the idiot box? Anything but the elections. Pricks.”

I placed Bill’s Colt, heavy enough to be loaded, in a drawer beside the till. I set the TV remote where the gun had been.

Bill was no stranger to great waves of depression. In ‘66, Bill was wrongly charged and convicted of a triple murder and spent 26 years in a slew of Federal Penitentiaries until some UT law student uncovered some untested DNA. Now he lived alone down the railway tracks and kept to himself. Normally, he was an alright conversationalist, if you didn’t push, a bit pessimistic, but what can you expect.

No answer, I set the basket beside the remote and went back to re-reading Hondo.

Twenty minutes later, I know because the college football was kicking off, four plain-clothed cops came in and sat by the window. They lit ciggies and ordered Lonestar and Garrison Brothers bourbon just like Bill. I found them strange, drinking in my bar, their egos stunk, but they were paying to drink. Nothing would make them happy. I heard one say something about a shit eulogy and put two and two together.

After the first quarter, one got angry and threw another’s Zippo down the wood floor. The metal lighter slid under Bill’s stool, who was just sitting there smouldering. Sometimes Bill has a way of just mentally erasing himself from space, especially while watching TV, like his superpower was evaporation. I bet he learned the technique in the clink, some sort of meditation known only to locked-up innocents.

One of the officers crouched behind Bill’s stool to get the Zippo, and boy it happened fast. I don’t know if Bill meant it, or if it was some subconscious prison reaction, like you don’t stoop behind a man in lockup cause the body just senses danger and reacts.

Bill brought his boot heel hard off the stool-foot-wrung into the man’s nose bone, a horse kick really, and the cop’s nose exploded like a firecracker.

Before I could even dog-ear my page, the other officers had Bill by the throat, elbows, and knees, running him through the door like a battering ram.

I grabbed Bill’s revolver and followed them into the street. After the first fist hit Bill’s face, I hollered. They either didn’t hear or didn’t care. After the second fist, I fired a shot into the air, up over the bar aiming for the tracks. The bullet would land well on the other side in the marsh.

“Hold it boys, from what I saw, this misunderstanding was an accident.”

“Not on my watch. Bill’s my best customer.”

I pointed Bill’s loaded Colt at the closest red face.

“Your buddy was crawling under Bill’s stool. He just stood up at the wrong time, didn’t even see him, now you let old Bill go before I let this trigger go. LET. HIM. GO. NOW.”

“We risk our fucking lives protecting you fuckers and—”

I fired another shot over their heads, worried it might take out a window at the old pharmacy. “Old Bill just got a start and stood up at the wrong time, purely coincident. Let’s call it a day. Don’t worry about the drinks, move along to the next watering hole, no harm done.”

The calmer of the four swore. They tossed Bill loose like change. They turned their backs and walked around the side of the building. I went over to Bill and helped him up.

“Gimme my gun back.”

“Not today, Bill. Come inside and finish your drink.”

I walked straight through the bar to the back-kitchen window and felt relieved to see the cops get into a big black truck. They spun their wheels and threw gravel all over backyard. I poured Bill another bourbon. He was back in TV-land.

Bill smiled and looked much better. His blood was flowing. He started to chat regular as if nothing had happened. When he left, he took his teeth and I watched him walk home alone down the tracks from the back-kitchen window. I still got Bill Poster’s Colt revolver in the drawer by the till. I’ll keep it for him until he really needs it.

David Morgan O'Connor is from a small village on Lake Huron. After many nomadic years, he is based in Albuquerque, where an MFA and short story collection progresses. His writing has appeared in Barcelona Metropolitan, Across the Margin, Headland, LimeHawk, Origin Journal, Cecile's Writers, Bohemia, Beechwood, Fiction Magazine, After the Pause, The Great American Lit Mag (Pushcart nomination), The New Quarterly and The Guardian. Tweeting @dmoconnorwrites http://davidmorganoconnor.com/