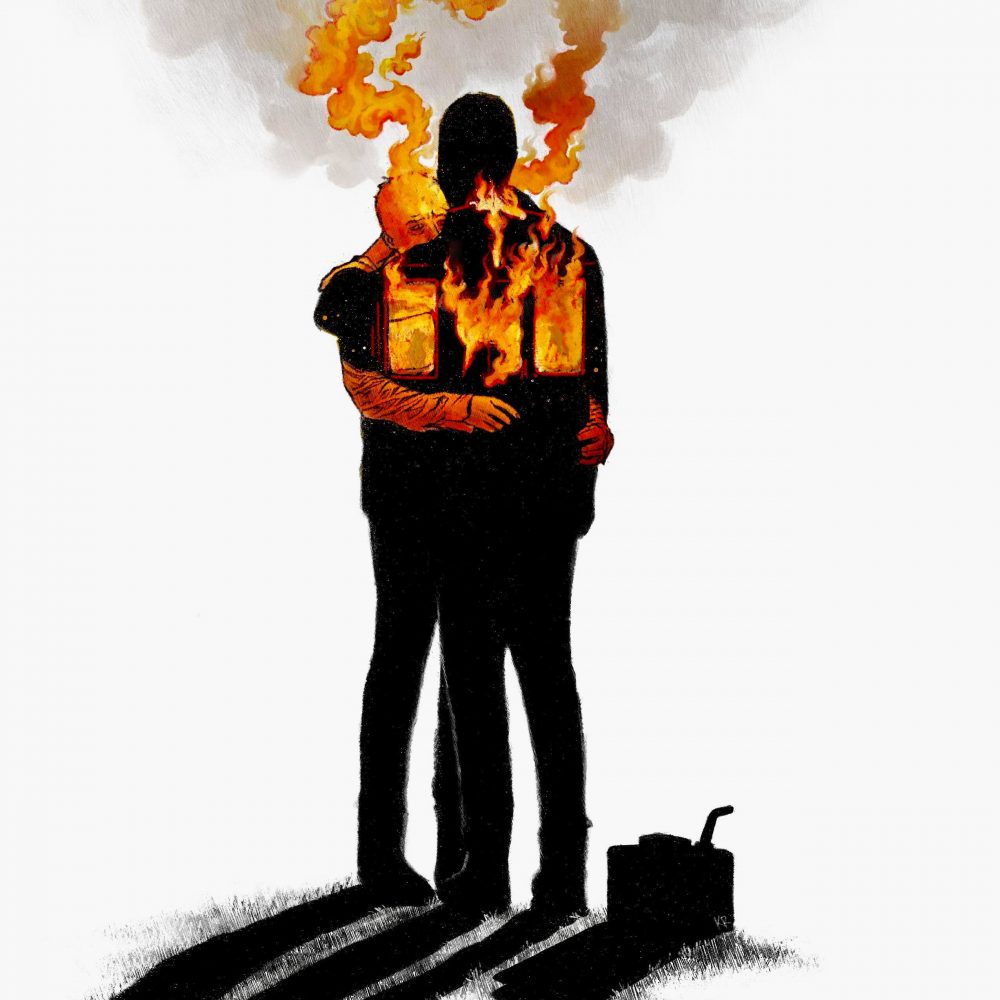 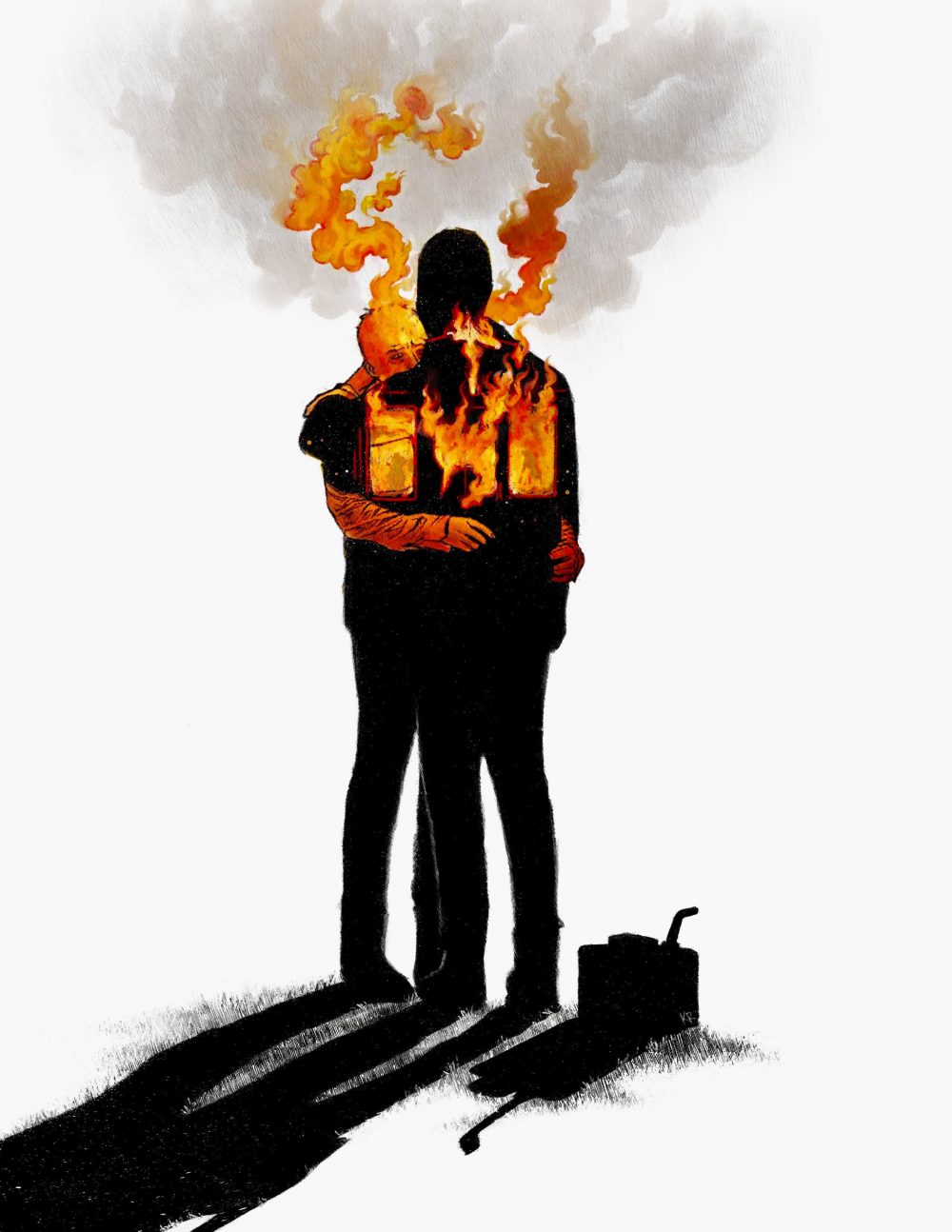 The father breathed the night air in deep, savoring the scent of lighter fluid, gasoline, and crushed pine needles. The woods were still, clouds low and threatening rain. It was a great night to burn.

The son circled the dilapidated cabin, glugging out gasoline from a red canister, accidentally splashing some on his sneakers. The grandfather followed behind him squeezing lighter fluid and offering advice.

Make sure you get the base. Don’t get it on those bushes, we want to contain it, not burn the woods down, that’s how you get caught.

The son didn’t respond which was odd for a child normally so talkative. Since his mother had passed, it was like he tried to fill the shape of her absence with incessant jabbering. But not tonight. At midnight, in only a few minutes, he would turn thirteen, would become a man, and watching him now, the father couldn’t believe the time had come already.

He remembered the son’s first word—Mama—a word that now meant ghost, a word fallen into disuse, a word that loomed large in their minds but didn’t escape beyond any lips. He remembered the time—many fires, many towns ago—the son had jumped and grabbed a low branch, a thorn piercing his palm. But instead of letting go, knowing that would tear a line to the tip of his thumb, he had clutched the branch harder, driving the thorn deeper if only for a moment so he could pull himself up and put his weight on his other hand, pull the thorn out clean. The father remembered bringing him to other fires he had set in the beginning and watching his eyes gloss over so looking into them, he could only see flames.

The son returned to the father and set the red gasoline can gently at his feet, almost reverently. The grandfather joined them pulling out an old blue handkerchief and wiped where his receding hair was beginning to make a line resembling a bird drawn by a child.

The father wondered how his wife would have felt about what they had become—wanderers, thieves, this family of arsonists. What had been done first out of anger and necessity, became their ritual, a way of remembering. This was what they told each other at least.

Everything is ready, the grandfather said.

For the first time that night the son smiled, a nervous smile, his small body rigid with contained energy. The father tried to remember his first fire, not the first fire he’d lit after they lost her, but his actual first fire when he was young, but he couldn’t. It seemed like something important to remember, something he could have shared now.

The son nodded but didn’t look at the father. He’d heard all of it before and his eyes were trained on the cabin. Are we ready? Can I light it?

Together, all three faced the cabin.

Go ahead, the father said.

For mom, the son said, and struck a match against a random stone at his feet. He dropped the match at the base of the closed front door and leaped back as if it might catch him. There was a whoosh, the sound of devoured oxygen, and then light.

The son returned to stand between the father and the grandfather. Flames surged up the exterior. The wood of the cabin was dry; it would be over quickly even if the clouds cracked open. Some glass inside exploded. The boy reacted, taking a step back, but then seemed to realize he had been afraid of nothing, and smiled with wide-eyed accomplishment. They listened to the pop and snap for a moment. The smell of it enveloped them, familiar and sad, yet somehow comforting too, the way a funeral dirge allows for release with its known tune and rhythm.

Then the screaming started from inside the cabin.

A wild, frightened, wordless scream, the sounding sending shivers over the father’s skin. The grandfather grabbed the son’s shoulders. Did you check inside? His voice quiet, intense.

Tears welled up in the son’s eyes and he turned to the father. The screaming filled everything—a horrible sound, a death knell. We have to do something. We have to do something. The son picked up a rock, seemed to realize the futility of what he was about to do, paused, then threw the rock at the cabin anyway. His cheeks shone, and the wet there lit up in flashes of red and orange. The grandfather searched in the bushes behind them, for what, the father couldn’t imagine.

Stop, the father said. Come here. Stop. That’s not a person. That’s a red fox. I did the walk through and the cabin was empty. Take a breath. Breathe. It must’ve snuck in after we started with the gas. Look at me. It’s a fox. They scream the same way we do.

He pulled the boy to his chest. This is my fault, not yours.

The grandfather stared at them for a minute, and the father shook his head just slightly so the boy wouldn’t notice. The grandfather’s eyes widened and he ran to the house and began kicking dirt he on the flames. It didn’t do anything. He couldn’t get close enough with the heat. He swore and stalked off into the trees, not making eye contact, as the clouds broke, droplets sizzling as they hit the cabin.