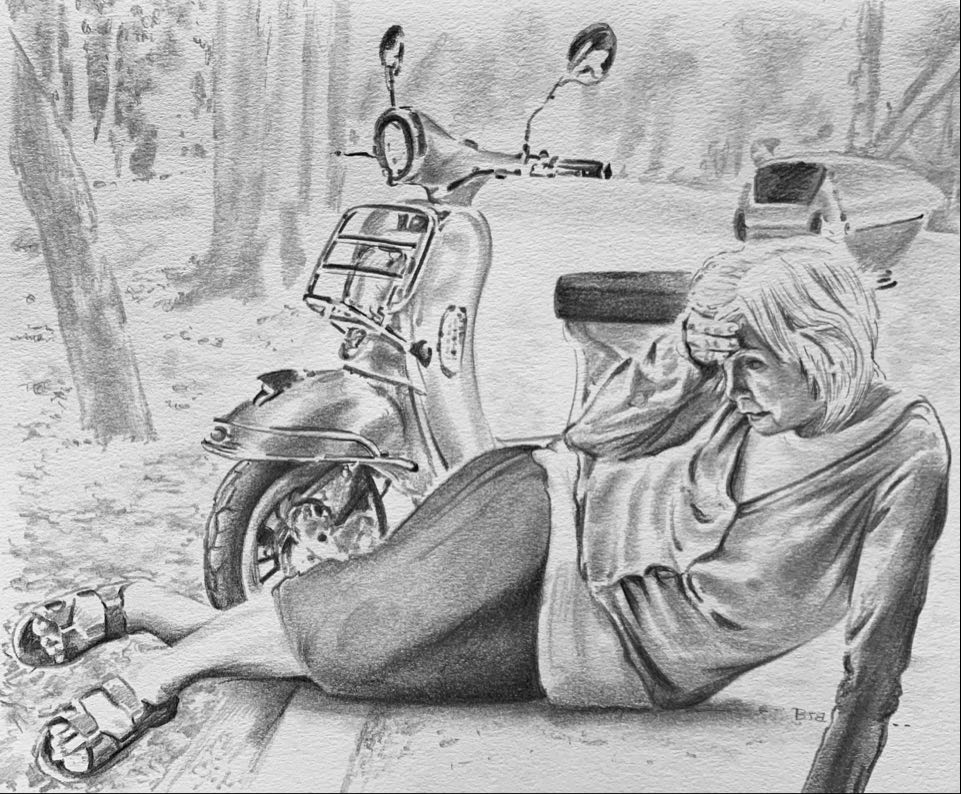 June stops outside the liquor store on Amsterdam that has its name painted in flaking, gold letters on the glass. It’s not quite eleven and the place is empty. She hopes the man at the counter is the owner, and single, or at least a lonely manager. Or at the very least—and this is less hope than calculation—underappreciated. Most of all, June hopes he keeps the same schedule every week.

She’s wearing her new (to her) dress, the brown paisley with the puffs, and plastic pearl earrings that remind her of nights she wore the real thing. She parks her Vespa and enters, a goofy, godmotherly smile playing at the corners of her mouth. June walks, as if among flowers, stopping to admire the gin, chuckle at a novelty beer, until at last she is holding, cradling, a bottle of Crystal. June does not have to pretend that it is heavy in her hands; this is a magnum. Her arthritis complains, but she hangs tight. Tough not chilled, the bottle is cool against her fleshy arm. Holding it, the years peel away. “Miss? May I help you?”

Pleased to be genuinely startled, June smiles at the man with his sparse hair and full mustache, not young (not nearly), but younger than her. She sighs. Suddenly her wrist grows weak. The man with the silver mustache helps June reshelf the bottle. June blushes and shakes her head. “No fool, like an old fool,” she says, patting her hair.

“You and me both.” His grin pulls at the tangles in his silver mustache.

June batts her eyes. “I shall return to procure Prosecco upon receipt of my check.”

“I await the day.” He offers his arm and escorts her to the door, every bit the prince.

A week later, June again parks her Vespa. Dismounting, she tumbles. A crowd forms. For several long minutes it seems her prince won’t come. Struggling up, June gasps; she really hurt her shoulder. She dirtied her dress for nothing.

But he’s here. He helps her up. And here, swimming into view, wrapped in a swirl of brown paper, is the bottle. June reaches for it a little too eagerly and fondles the swaddled bulb.

No plastic cork, that. This is a beautiful morning. The sky is soft blue, the buildings are faded red, and Silver Mustache will get his three wishes (provided all three are to feel like a good guy). To secure his fortune, June’s prince leans in and whispers, “Better than prosecco.”

Alarmingly, the crowd wants to call an ambulance. Muttering about insurance, June aims for the right balance between resilience and frailty as she climbs back on the horse, smiles bravely, and waves to light applause. She waits to gun it until she has turned two corners. But once she’s parked and locked her Vespa under the stairs, June can’t wait any more. She rips off the paper: Piper Heidsieck.

Her shoulder aches and the scrapes on it stick to the brown cloth of her new dress where  a little blood has seeped out and dried like a bandage. It won’t show too much in the paisley, but June’s papery skin will tear when the threads pull from the wound. She only hopes her dress hasn’t torn. Sometimes the clothes are okay even if the skin beneath bleeds. She cranes her neck to assess the damage, but her range of motion has contracted. She can’t tell. It’s an excellent champagne, even if a mid-range version, but exchanging gratitude for disappointment makes her feel dingy. Her shoulder is swelling and she wishes there weren’t so many stairs.