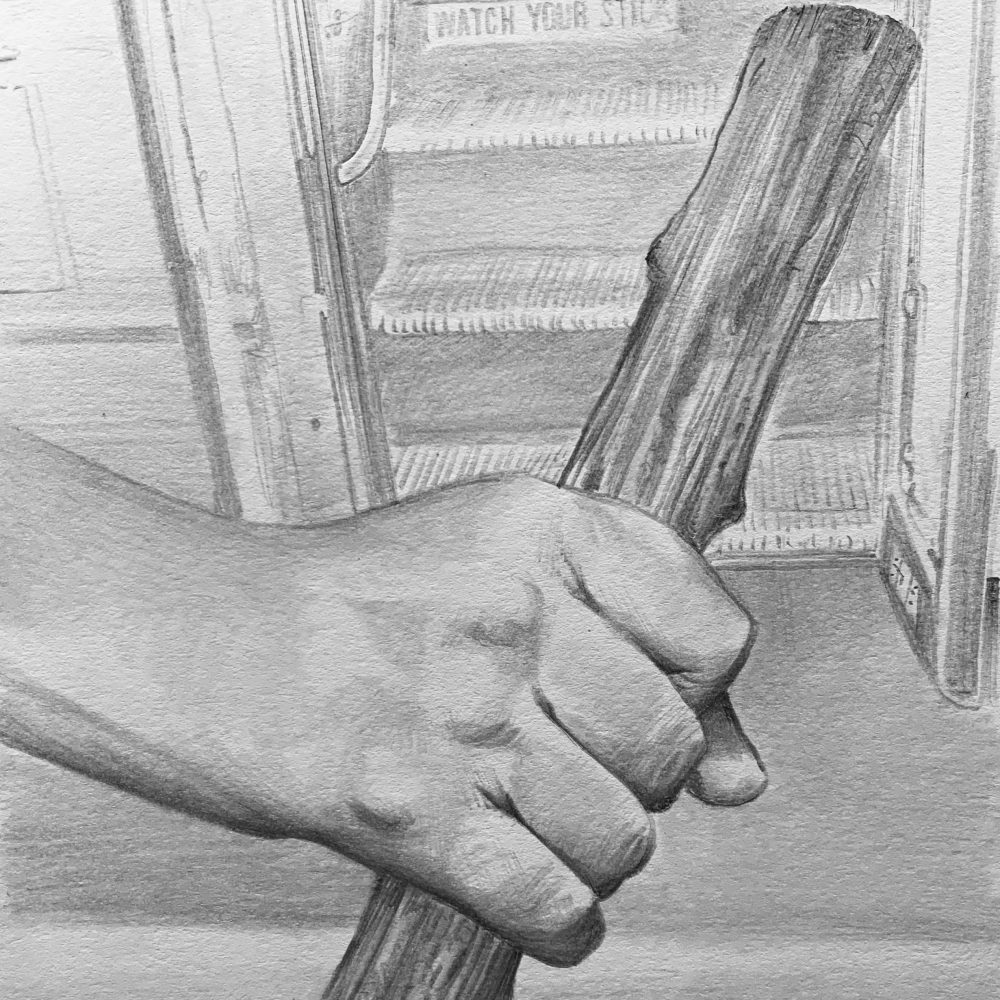 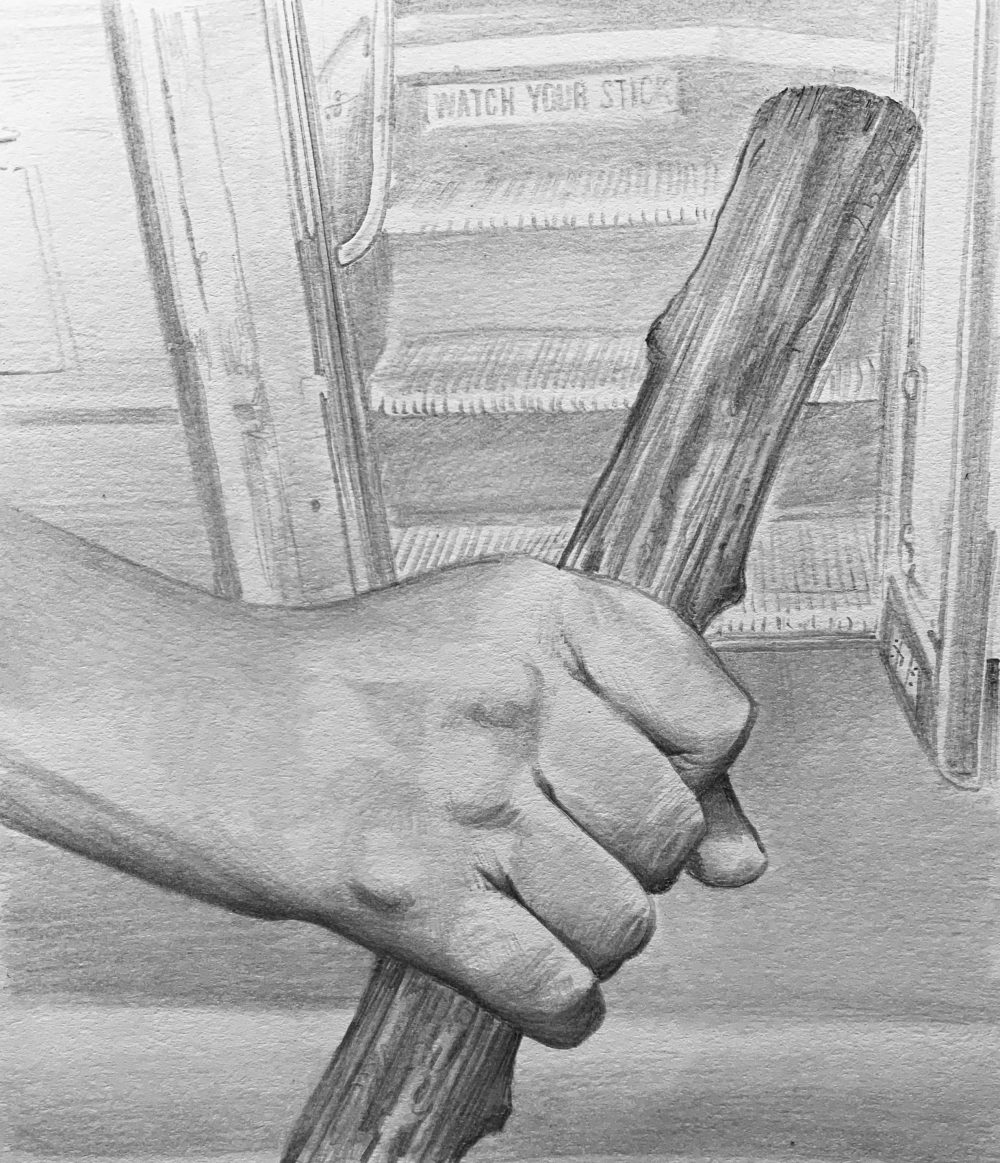 The loneliness you feel after your husband dies grows into something dark and uncomfortable. So you make a point to step outside each morning with your coffee cup and watch the street come alive with busy neighbors. In this story inside your head, you take afternoon strolls and stop to chat with friends, bragging about your sons who are both grown with good jobs, nice families, even if they live far away.

In this story outside of your head, you realize that the street has changed significantly over the years as neighbors you once knew have died and been replaced by younger families who rarely wave or say hello.

The boy walks by your house early one morning wearing a tattered pair of jeans meant for a kid half his age, half his height. Faded black socks climb up his legs from his dingy sneakers. He is clutching a stick in his hand, moving with determination toward a school bus parked at the stop sign. Laughter escapes through cracks in its tinted windows. The door opens with a swoosh and the boy disappears up the stairs, then reappears again, his sneakers retreating back onto the pavement. He walks nervously in little circles, the stick held tight between his fingers.

The bus driver pounds the horn and yells, “Drop the fucking stick, buddy.”

In this story inside your head the boy drops the stick. He climbs the stairs once again and the bus pulls away. You go back to drinking your coffee.

In this story outside of your head, you walk across the yard and say, “I’ll hold the stick for you. I’ll put it on my porch.”

The boy’s lips shift into a smirk and he tosses the stick at your feet. It’s nothing more than a large tree branch, unremarkable in every way. You prop it against your porch steps so he’ll see it when the bus returns.

The boy’s house is a small rambler where Peggy and Bud Martin lived for three decades and raised their two girls, both of whom went off to college. Peggy died from breast cancer, and Bud, broken-hearted, passed away soon after.

Jane Kraus, who lives next door to the boy with her tow-headed triplets, says that he was put on bruise watch at school. Once, he came to class with broken fingers, but they let it go, because that’s not a bruise.

There is no father in the house, according to Jane, just the boy and his mother. Sometimes a nice black car pulls into the driveway. A man in a green cap gets out and rings the doorbell. Always the same man in the same cap and he stays for approximately 20 minutes. Jane has the perfect view from her kitchen window.

At dawn the next morning the boy is at your door, ringing the bell once, twice, three times. You can see him fluttering through the fogged glass, a blur of stuttering movement.

In this story inside your head, he is beautiful and sweet, a wounded little bird that has fallen from a nest in your maple tree. You cradle him in your hands, stroke the curve of his feathered scalp, nourish him with warmth, and then carefully place him back inside the nest where his mother waits.

In this story outside of your head, his face is covered in zits begging to ooze their white pus. His hair is pressed to his head with grease. His teeth are mangled and coated in yellow grime. You can see a line of mud-colored skin at the base of his throat in the shape of fingerprints.

“Right where I left it.”

You gesture toward the steps where the stick, clearly, isn’t.

He wrings his hands and begins to pace. “I knew they’d take it.”

“There are so many more where that came from,” you say, pointing up at the trees, and together you stare at the branches above you, their leaves shimmering in the morning sun, a rainbow of yellows and reds, and the sky beyond: blue and clear for miles.

In this story inside your head, he comes to your house every morning. You give him toast and juice and listen to what he says; you answer his questions, you say things that make a difference.

In this story outside of your head, he shows you that place, just above his ribs where an iron seared and braided the skin into thick white leather.

The next day, an ambulance pulls into his driveway and the boy’s mother comes out on a stretcher, zipped into a body bag.

Winter come and the boy disappears. The sycamore branches grow bare and glisten with ice. The sky swells with snow that falls, gently, to the ground.

In this story inside your head, you see him again, trudging through a blizzard with his sycamore stick, a dark angel emerging from a flurry of white.

Jamy Bond's stories and essays have appeared in a variety of publications, including Wigleaf, Pithead Chapel, Barren Magazine, The Sun and The Rumpus. Her work has been nominated for the Pushcart Prize, Best of the Net, Best Microfiction, Best American Short Stories and Best American Essays. She lives in Washington, DC.