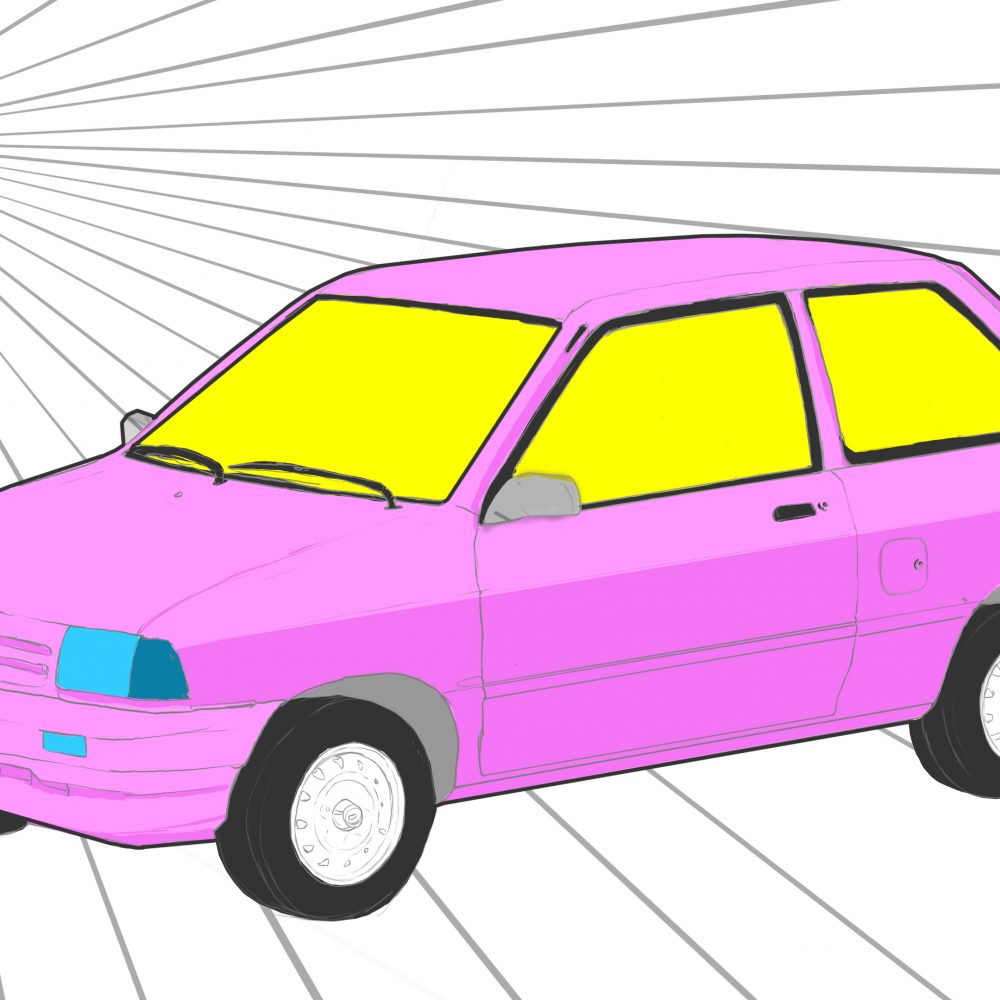 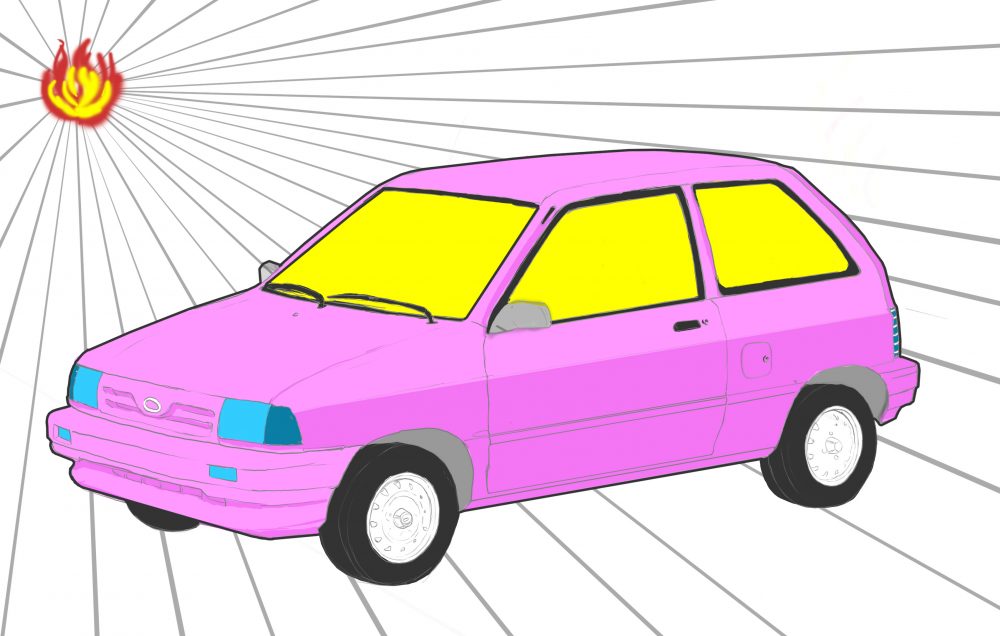 Smoke and foam grappled for dominion over a closet-sized half-bath. Karla swung the fire extinguisher like a champion air guitar player struggling with a real axe. Patty scrambled off the charred commode. “What the hell is wrong with you?” Karla shouted.

The fire extinguisher clattered to the floor. Karla scratched her head. She rubbed her chin. She pursed her lips and nodded. “Or, I could do you one better. You can join my group of amateur crime-fighters called The Justice Consortium. We could really use a superhero who shoots flames from her coochie to take down Enigma.”

“How is that better than seeing a doctor?”

“You get to wear a brightly colored, skin-tight outfit.”

Karla placed her index finger over Patty’s lips. “Shh. From now on, call me Albatross-Woman.”

Patty squirmed in the back seat of a Ford Festiva. Empty Bud Light cans rattled in time with her swaying hips. “Oh, man. I really gotta pee. Pull over.”

Albatross-Woman shot a stink-eye into the rearview mirror. “I told you that was too many beers to chug. You have to hold it. We’re almost at Enigma’s hideout. Your pee is what’s getting us through the security perimeter.”

“Hold it? Ain’t no hold it, muffafuffer,” Patty slurred. She leaned back and closed her eyes. “Ahhhhhh…” The upholstery caught fire first. Cheap foam padding proved highly combustible, as did the layer of fast food bags that lined the floorboard. Screams engulfed the car as it crashed into Miss Mirabelle’s Home for Sad, Orphaned Puppies. Patty, Albatross-Woman, and The Beaver jumped onto the sidewalk. Flames laid siege to the orphanage.

The Justice Consortium skirted a press gaggle at the library entrance. They ducked into the poetry stacks to evade a snoozing security guard. Albatross-Woman pulled a Bud Light from her backpack, and slapped  the can into Patty’s belly. “Start chugging. We’ve got thirty minutes until the ribbon cutting. The library spent their whole budget on this thing. It’s the biggest event in town all year. I’m sure Enigma will try to steal it. Everyone get in character.”

Patty cracked the beer, and wedged her tongue into her cheek. Chugging went smoother if she engaged as few taste buds as possible. She stashed her empties in the Chuck Bukowski section. Albatross-Woman wiggled into her black and white spandex, unfurled feathers, and snapped a fiberglass beak over her face. The Beaver tucked his striped polo shirt into his khakis, and rolled up his pant legs. A giant glop of Brylcreem coaxed his hair into a halfpipe front-flip. His lips spread in an aw-shucks smile.

Albatross-Woman pointed to the opposite side of the open foyer. “Move out to the target. They’re letting the press inside.”

Patty squinted and craned her neck. “Where? What is it? Behind the porta-potty?”

“No. It is the porta-potty. We’re hiding inside until we confront Enigma.” Albatross-Woman filled both hands with amatuer crime-fighter collars, and pulled the Justice Consortium to the target. The spring-loaded door clattered as everyone dove through the seat-rimmed hole in the porta-potty’s antechamber.

Germ-killing and odor-dampening chemicals soaked Patty up to her chest. Every few minutes, a ripple of applause punctuated the congratulatory speechifying going on outside. Hours passed. The light filtering through the vents faded from surgical bright to cleaning crew dusk. The faint scrape of broom on linoleum was the only sound. “I don’t think Enigma’s coming. And I gotta pee,” Patty said.

The porta-potty door wheezed open. Albatross-Woman clambered through the escape hole, and draped herself over the intruder’s neck. “Go ahead. Finish him off.”

The Beaver sprang into action. “Aww, gee Wally.” His lips pouted. “Gee, Wally,” he repeated with an extra twenty decibels. “It’s not working. My powers are useless against his arch-villainy.”

“That’s your power?” Patty said. “I figured it was gnawing through wood, or birthing babies.”

“Sorry. Beaver the TV character, not Beaver the animal. You’re not the first one to make that mistake.”

“I’ve had it with your Justice Consortium,” Patty said. “I don’t care about catching Enigma. All I want is to not burn when I pee.”

The intruder shrugged Albatross-Woman off his shoulders, and mopped the inside of the porta-potty. “Enigma willnae bother ye nae mair. I catcht him choring a wee nubby pencil. He’s gaun away for good.” He shook a flask. “If ye have the burning pee, a wee nip ay whisky is what ye need.”

Albatross-Woman threw her beak on the floor. “We are the worst dress-up amateur crime-fighters ever.”

“Maybe we should give up on the arch-villains and shift our focus to mid-level villains,” The Beaver said. “Like Question Mark, the mysterious scribbler of existential chalk musings on the town’s sidewalks.”

She flipped the open/occupied switch. Her bottom nestled onto the hard seat. She sighed as the pressure in her bladder released. Instead of the tinkle of liquid-on-liquid, a lilting Scots drawl echoed in the confined space. “O my Luve’s like a red, red rose, That’s newly sprung in June; O my Luve’s like the melodie, That’s sweetly play’d in tune.”

Patty screamed. “Why is there Romantic Scottish poetry coming from my hoo-ha?”