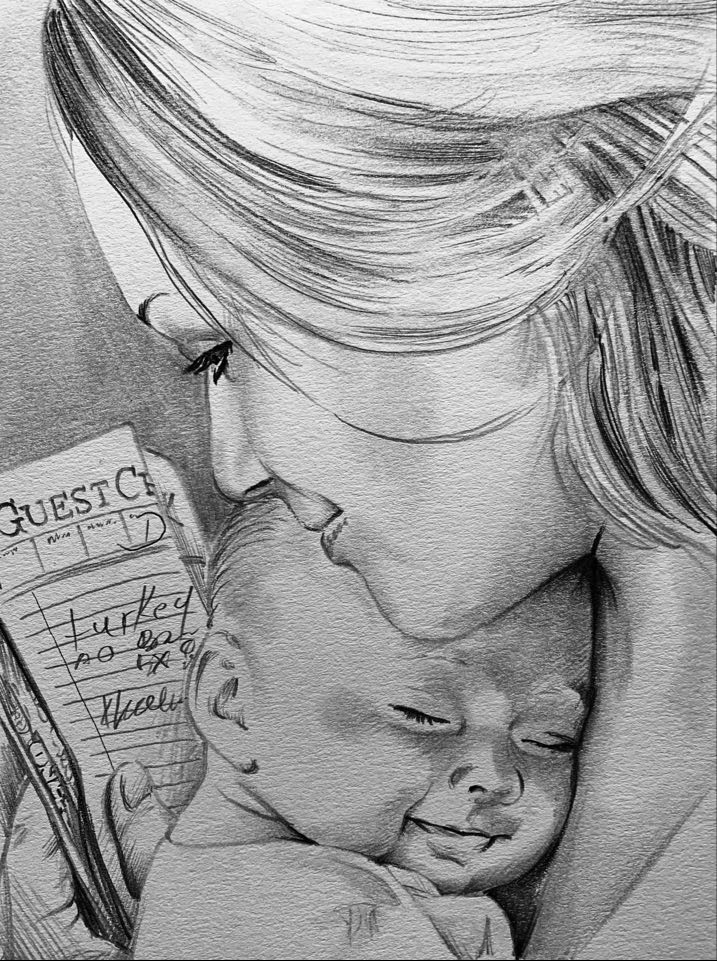 Melissa sat alone in a crowded diner and stared into a lonely cup of black coffee. Her pancakes covered in syrup were soggy and untouched. She struggled to tame her jumbled thoughts as she dug her fingernails deep into her scalp. She needed to feel something. Anything. Then she heard it. Crying. It cut her like a sharp knife to her abdomen all over again.

“Now what’s wrong with you?” the young woman at the next table hissed at a child. Tears streamed down the child’s flushed cheeks as she squirmed in one of the diner

She dropped her hands to the table with a thud. “Addie.”

showed her toothless gums. Melissa felt something stir within her, a flutter of something now gone.

“I’m Melissa,” she said to the young woman.

The ruckus in Melissa’s mind quieted as she absorbed everything about the little girl. The rolls of chub around her wrists. Her strawberry blond ringlets. Her blue eyes reminded Melissa of the sea in Aruba where David had taken her before…this child was everything.

Jessie ignored the child’s continued fussing. She instead continued flipping through a high school calculus textbook and scribbled equations into a notebook.

“Maybe she needs to be changed.”

Jessie narrowed her eyes. “What?”

“Does she need a diaper?”

In the chaos of Melissa’s mind was an authoritative voice. Not yet, Melissa thought. “Your daughter is beautiful,” she said.

Jessie scrunched her freckled nose, which flashed a small silver nose stud. “I’ll tell my sister you said so,” she responded bluntly.

Melissa raised her eyebrows. “She’s not yours?”

“Hell no. I’m babysitting for my dumbass sister who had no one to watch her kid.”

“Probably sleeping off a hangover at some dude’s house.”

Melissa reached for Addie’s little hand. As she rubbed the child’s soft skin with her thumb she was intoxicated with bravery. “Her father?”

The voice in Melissa’s head screamed, persisted, dictated. She closed her eyes hard to silence it, or at least quiet it. Patience.

“Whatever, lady,” Jessie responded, her face twisted. “If you’re so concerned maybe you should take her.”

Melissa instinctively touched her flat belly. Doctors said her body healed, but scar tissue gnawed her innards. She smiled, like everyone expected, with a faked happiness, but inside she was broken. David couldn’t fix her. He couldn’t compete with her raging demons. She didn’t blame him for leaving. She didn’t want to stay either.

A waitress rushed over with a mop and bucket.

“Go to the bathroom,” Melissa gently urged Jessie. “Clean up.”

“I’ve got her.” She mustered her most authentically reassuring smile that one stranger could give to another.

Jessie rushed into the diner’s single bathroom. Melissa waited to hear the door latch before she lifted Addie from the highchair. She bounced the girl on her hip. It felt so natural. She hummed to lull the voices. Melissa’s mind, once chaotic and disjointed, was quiet and clear.

“Your daughter is a cutie,” the waitress said with a smile.

Melissa beamed. “Thank you. She’s the spitting image of her father.” The words tasted sweeter than she ever imagined.

The waitress swept the last shards of broken glass into a dust pan and disappeared into the kitchen.

“Mama is here now,” Melissa whispered into the child’s ear as she dropped a few wadded bills from her back pocket onto the table.

The fake mother and her child slipped beyond the diner’s front door and were swallowed into the shadows of an unassuming world.

Emily Marcason-Tolmie is a military wife, mama to two adorable little boys, writer and a prospect researcher at a small liberal arts college. She's a Flash Fiction Contributing Editor at Barren Magazine, an online literary magazine. In 2018, she won the Scintillating Starts Writers Advice Fiction Contest. She's published in Flash Fiction Magazine and The Penman Review and has a flash fiction story forthcoming in Every Day Fiction. She's a graduate of the prestigious New York State Summer Writers Institute. Emily holds her MA in English and is pursuing her MFA in Creative Writing through Southern New Hampshire University.