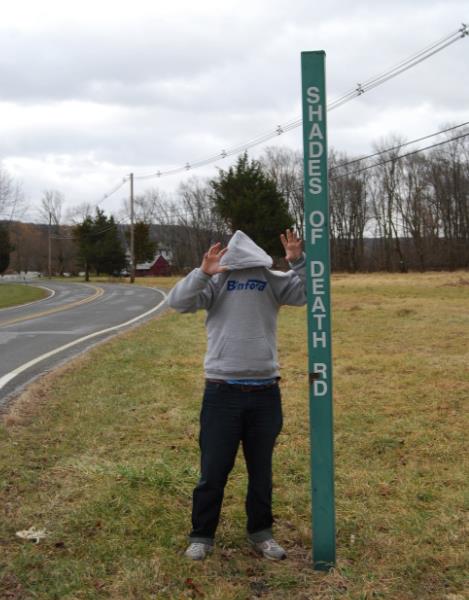 6th grade. It was like every male in middle school discovered the word “virgin” all at once. It appeared on our tongues overnight, like a rabid ulcer. I was slow to pick up on things back then. Slow to care about what the other fellas were into. My mind was occupied with Weird Al lyrics and fantasy novels and trying to be the best class clown I could be. The hell did I care about this “virgin” label? I knew it had to do with sex, that’s all. That’s why I choked when the older guys on the playground gave me the “virgin test.”

It went like this. The 8th grade boys waited by the exit at recess and stopped every male from the lower grades on their way out to the playground. One guy would grab their wrist and force his hand up, while another examined his palm, like a gypsy fortune teller (with more zits).

They’d pretend to examine the tracks in your palm, knowingly nod their heads, and conclude with “Yep, just as I suspected. A virgin.” Same bit every time. They’d all have a laugh and move on to the next poor schmuck who just wanted to play kick ball or whatever. A real hoot, these guys.

It got to my turn and I willingly held my palm up for inspection. Let’s just get this over with. The palm reader (henceforth: Paul) saw that I wasn’t down for their humiliation game and he looked me in the eye and said, “You don’t even know what a virgin is, do you?”

Summoning the most defiant response my developing mind could muster, I blurted out, “Yeah… you!”

I twisted my wrist out of Paul’s grip and ran away, triumphant. I still didn’t know what a virgin was, but fuck em. I’d shown them all I wasn’t some lowly crumb they could embarrass. I’d shown them who the real virgin was. “Yeah… you!”

That night Paul’s house burned down.

I don’t remember when or how I heard about it. Ma probably told me before school. Or maybe someone told me in class. I assume Paul wasn’t in school that day. But I remember exactly how I felt when I learned about the fire at Paul’s place. POWERFUL.

Powerful because I’d done it. It was obvious. I had burned his house down. I mean, not physically. This isn’t an admission of guilt 25 years coming. I hadn’t stolen away through the darkness of the rural North Jersey night with a pack of matches and deliberately set fire to Paul’s house. I got my rocks off burning action figures back then, not family homes.

Somehow, my mutinous playground cry of “Yeah… you!” had set fire to Paul’s house. It was too much of a coincidence. The same day I’d popped off all over Paul with my razor-sharp witticism, his house goes up in flames. I mean, c’mon.

Back on the playground, I’d fled his grip before seeing the results of my crushing response. I imagine Paul was just devastated. Ruined. Probably felt two inches tall. Really fucked him up psychologically. And it stayed with him throughout the day. He couldn’t focus in class. He walked home from the bus stop with a distant look in his eyes, my voice echoing in his ears like a prayer against the cathedral walls. “Yeah… you! Yeah, YOU! YEAH YOU.”

He’s making an afterschool snack for himself. A hot dog or something. No, grilled cheese. That’s it. He’s frying up a grilled cheese sandwich. The kitchen he’s standing in, it’s small. So is the dining table where he’ll eat. I know this. I’ve been in his kitchen. Paul’s mom was a den mother when I was in Boy Scouts. One time, we had a pack meeting there and I crammed as many Chips Ahoy as possible in my mouth (seven). That’s what makes the connection between what I said to Paul and the fire so strong. I can visualize details like the cracked linoleum and the small, round dining table in the kitchen. I’ve sat there. From the table, you can see into the living room, out the front door. I know what all this would look like getting torched.

He’s frying up a grilled cheese sandwich. But his mind is occupied. Stuck on repeat. Doing cartwheels around what had happened on the playground. How Cooper had served him an ice cold verbal knockout.

And he forgets to turn the gas burner off.

Or maybe it happens later. After dinner. Paul’s taking a shower. One of those symbolic showers you see in the movie that cleanse physically and metaphorically. The ones used for dramatic effect at key moments: a cleansing rebirth, the point of self-forgiveness, sweet redemption. In Paul’s case, the water washing over him comes with a self-awareness. He realizes how his actions make him look. It hits him so hard, his scalp starts to itch. He’s got to wash his hair. Scrub the dirty blonde mop until his fingers bleed.

Then when he goes to blow-dry his hair, he forgets to check if his mother is running the microwave. It’s an old house, the electrical wiring is tired. He flicks the switch and inside the bathroom wall, the house’s veins begin to sizzle. It doesn’t take long for the fire to spread. Thank Christ that Paul smells the burning. He gets his mother out in time. There are no causalities. If there were, I’d never forgive myself.

A few days after the fire, the power to destroy was still pulsing with anticipation inside me. A gift and a curse, no doubt. I walked the school halls tensed up. Ready to let the magic words out at the first son of a bitch that crossed me. “Yeah… you.” No one stepped up. Did they know? Was it written on my forehead? “Mental Arsonist.” Clear the halls for the Firestarter, twisted Firestarter.

It was wrong to want to do it again. I should’ve bottled this power up inside me forever. Unless a Nazi moved next door or something. But I was young and curious and maybe had one foot in the psychopath spectrum (I’ve grown out of it, Scout’s honor). So after gym one day, after changing in the locker room, I looked a classmate of mine (henceforth: Julian) right in the eyes and said, “Yeah… you.” Completely unprompted, with no context.

Julian gave me a funny look and I spent the rest of the day brimming with terror and excitement. How would it happen this time? More faulty wiring? Or would Julian’s old lady pass out with a lit cigarette teetering between her fingers, ashes slowly crumbling on to the fabric? I couldn’t sleep, I was so anxious.

Nothing happened to Julian’s house that night. No sparks in the walls, no gas burner ignited with a spark, no cigarette sending the couch up in flames. Hell, I don’t even think Julian’s mom smoked.

It was a relief, but a part of me couldn’t help but be disappointed.

My next run-in with Paul was an intimate one. I was at a restaurant with my folks and Paul and his mom came in. My parents invited her over to our table (knowing each other from Boy Scouts). They talked about jumping through the hoops of fire insurance, but all I could so was slouch in my seat and avoid eye contact with Paul. The ol’ Catholic guilt wrapped around me.

I wanted to scream at him so badly. Scream “I’m sorry!” Jump across the table and squeeze his neck by the collar and tell him how he’d brought it on himself. Instead I sat there, quietly eating my onion rings. Then Paul went to play pool and that was the last I saw of him.

The meaning I’d assigned to my slight playground interaction with Paul has never left me. It should, because it literally meant nothing. I bet if I tracked down Paul today two things would happen: he’d have no idea who I am and he’d have no idea who I’m talking about. But there’s meaning there for me. Why? We need shit like that, I guess. Especially when we’re young. Older, it’s hard to find meaning that really means something. Everything is an advertisement. Nothing matters. Better to imagine that you burned someone’s house down with an invocation than to be completely jaded, dig?