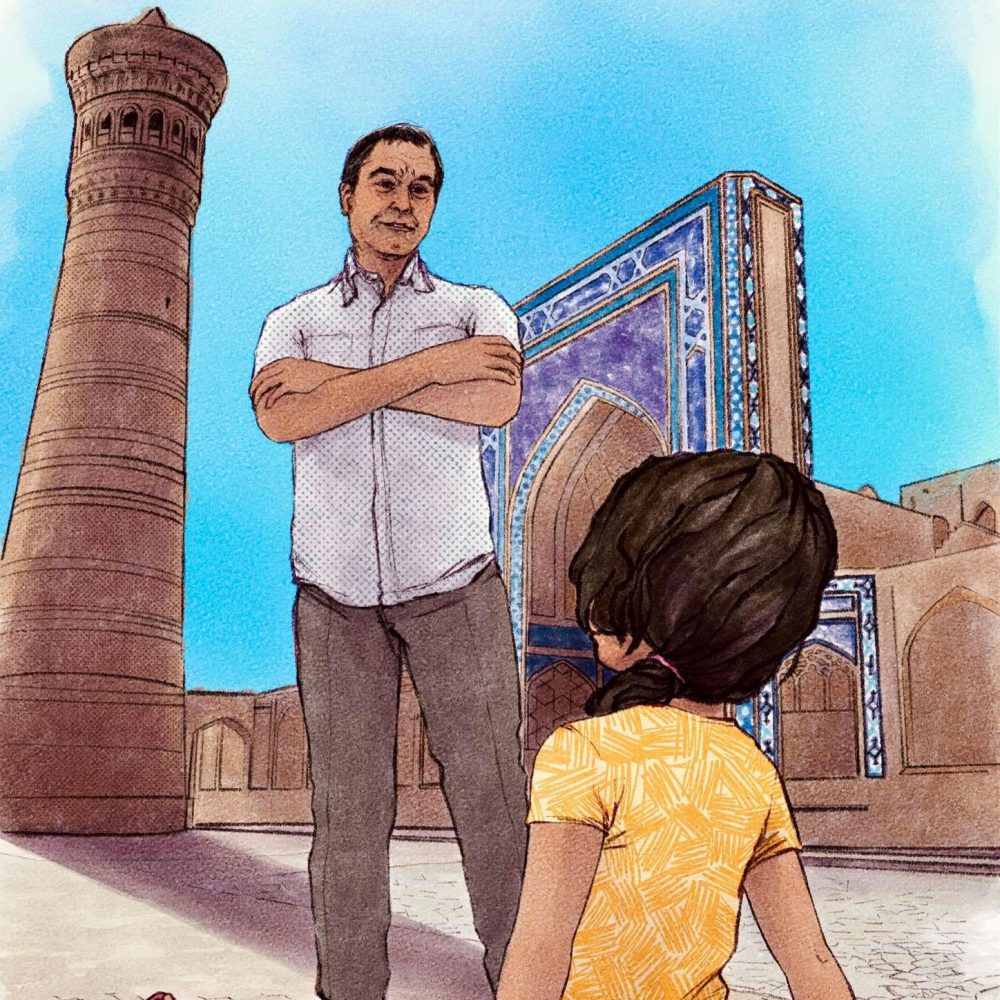 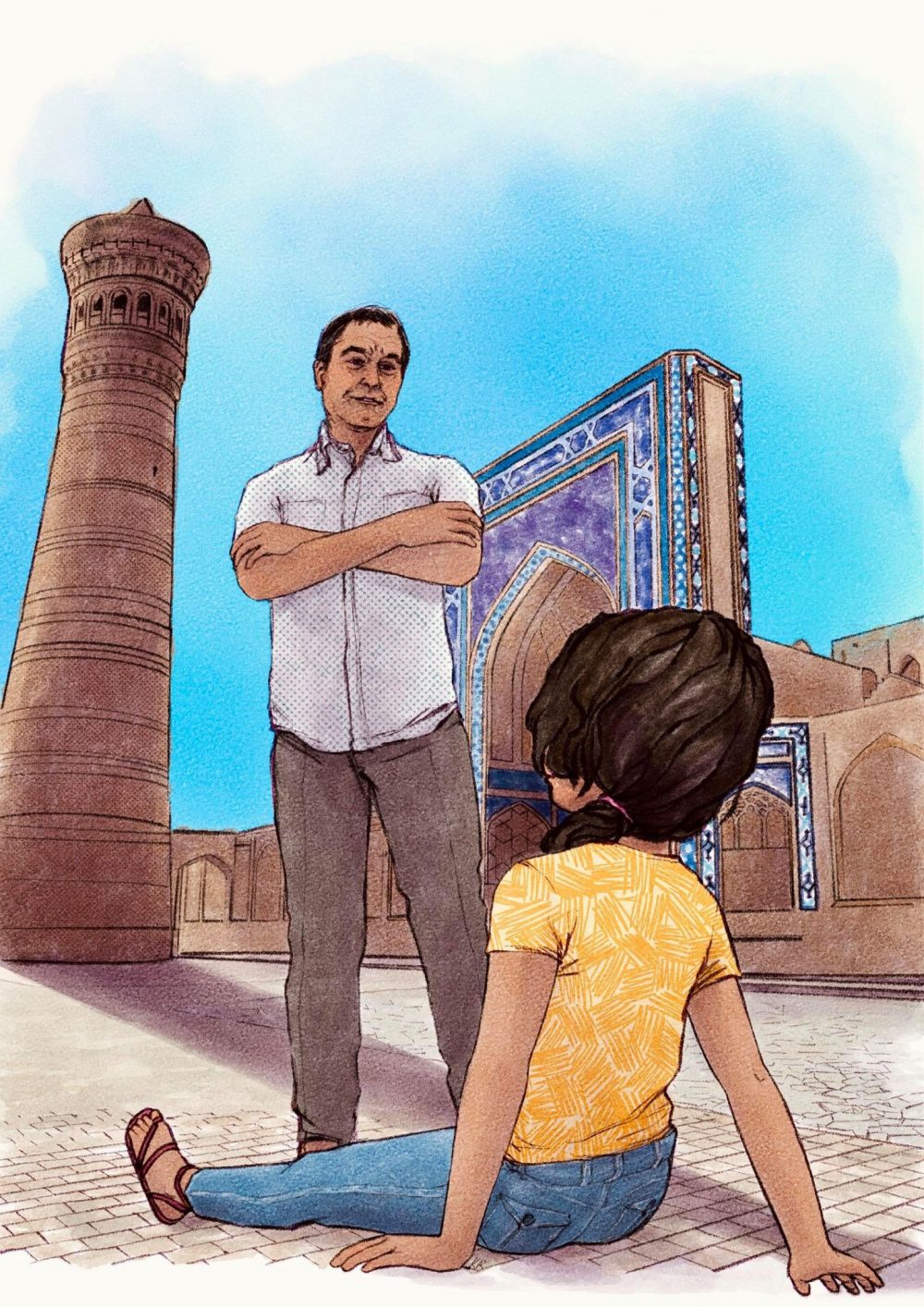 Priya laid in the center of the square, face up, arms and legs splayed like a starfish. Everything in her periphery was the same soft tan that she came to associate with the desert. Tan dirt, tan floors, tan walls, and tan pointed arches. Even the grit under her fingernails was a light tan. Everything tan except the details of the mosaic work on the walls: white with turquoise, indigo, and azure accents to match the cloudless cerulean sky above.

She knew the mosaics said something in a tall looping script she recognized from Baba’s library. Unraveling each word was always so exhausting to her. Each letter built on the previous so that the whole word, phrase, or sentence took shape as a figure of art. She lost patience trying to translate.

Instead, she marveled at the building’s height and wondered how it could have been built half a millennia ago without the use of modern machinery. She figured it must be like the pyramids: a product of ancient engineering and human sacrifice.

A dark shadow appeared in her vision and shielded her face from the sunlight. She frowned, saying “You’re in my light.”

Baba looked down at her. “My daughter,” he asked, “what do you think?”

“This must have taken a long time to build,” she said.

“This is the third iteration of the mosque,” Baba said.

Priya sat up. “Third?” She frowned at him. “They built this three times? Why?”

“It burned down the first time.”

Priya looked around at the big plaza surrounded by open-air hallways. Several pointed domes punctuated the scaffolding of archways and glittering tile. The windows latticed in a honeycomb pattern. A gruff-looking man not far from them held his camera up to capture the motif. They built this three times.

Baba handed Priya a water bottle. “Stay hydrated,” he said. “It’s not like back home.”

A hemisphere away, back home was nothing and everything like this. Both places pulled from the same color palette: tan sand, bright wide sky, but instead of tiles, home had water both brilliant and blue, sparkling in the hard sun not unlike these mosaics. Mama always said each space was crafted from the same clay.

Priya popped the bottle open and took a long swig before handing it back. “Can we get some grub?” she asked, reaching her hand up for a lift.

Baba smiled and clasped her wrist, pulling her up to stand next to him. She looked so much like her mother for a moment, with her mussed hair low in a ponytail and sharp jawline shaping her more adult face. It broke his heart a little to see Priya here without her. He handed her a map and pointed. “There,” he said.

“I can’t read this,” Priya said, pushing out her bottom lip.

Baba sighed and gestured through one of the archways. “It wouldn’t kill you to try.”

At the bazaar, Priya and Baba picked out shashlik and a pair of bagel-like bread disks stamped with interesting patterns. As they moseyed the market’s cluttered aisles, squeezing between other tourists and locals, Baba asked each shopkeeper where they could find the best plov—like Mama used to make. Priya munched on her savory skewered squares of lamb and admired the vibrant, rainbow stacks heaping with dried nuts, fruit, and vegetables.

The rich smells—sharp cooked meat mingled with tangy dried fruits and yeasty bread—faded to the softer scents of cotton and cloth as they walked. The Silk Road lived up to its name with textile offerings in vibrant hues and textures ranging from thick velvet to the thinnest silk. Priya thought again of the mosque and it’s rebuilding. What had they kept the same as the original? In which ways was the structure improved? Did they use modern plumbing or—

“How much of the rebuilt mosque is original?” she asked.

“Only the minaret survived Genghis Khan’s raze,” said Baba. “It’s twice as old as the mosque.”

Priya looked over her shoulder toward the mosque and saw, among its pointed blue domes, the cylindrical watch tower like a beacon on the horizon, not unlike modern air traffic control towers. A sandstone lighthouse in the middle of a sea of sand.

She returned her attention to the bazaar’s offerings and stopped to gaze at a pair of shimmering tassels billowing from the corner of a tent. Priya disregarded the looping script on the label above them and reached toward the silvery strings.

Baba grabbed her wrist abruptly and pointed to the sign. “Read before you touch,” he admonished. “Mama magic here.”

She rolled her eyes at him and brushed the tassels with the back of her hand. The cording slipped over her fingertips like sea water and stretched into long, liquid ribbons. She tried to shake the quicksilver off, but it sprung up her arm and consumed her.

Priya buckled in on herself and reemerged at the center of the minaret’s precipice. The inner room, plain and tan with no stairway down, flooded with light from the open archways surrounding her. She made her way to the edge of an opening and looked out over the mosque courtyards and the city spilling out below. A strong gust of wind whipped her hair free of its ponytail. She backed away from the edge and noticed a label–a long, looping artwork of letters—marking each sill. Etched in the center of a room was a larger puzzle of a phrase. With effort, Priya unraveled it. “Jump wisely,” it read.

Overhead, the sky gave a stark brightness to the pale sameness of desert sand and stone. Decades passed. Travelers passed through below. A fire engulfed the bazaar. Occasionally, a brush of tan sand wiped the area clean. The mosque endured. And Priya, puzzled, remained.