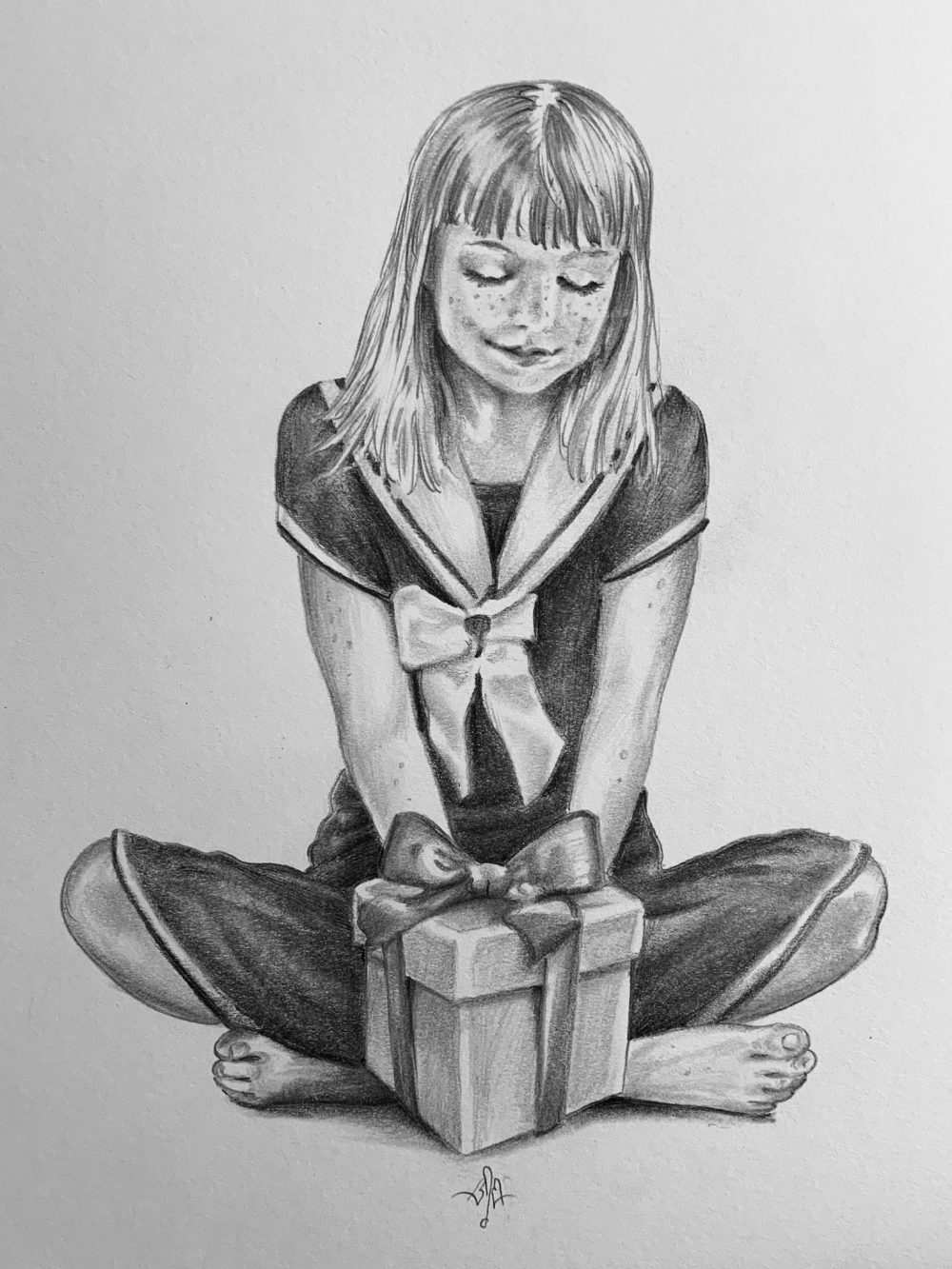 The girl in the video (freckles, bangs, missing tooth) sits on the floor of a small living room, crammed but clean, and unwraps a cardboard box without ripping or breaking, surrounded by balls of discarded paper.

Thirty years later she watches the video in a bedroom, crammed and dusty, the same room where her father died. His body laid out on the floor.

The girl in the video pulls a dress out of the box. The dress is made of denim, adorned with a broad sailor collar, the collar meets the waistline in an exaggerated style.

I hated that dress so much.

The girl in the video smiles and says oh thank you in a thin voice, eyes wide, the veneer of her appreciation stretched so thin it almost snaps.

I hated that dress so much she says only because anyone who would have cared is long dead. The video is punctuated by static. In the next scene, the girl wears the sailor-suit dress in the living room crammed with holiday detritus and her mother tells her to smile.

Ten years later, her father gives her a coffee grinder. She says: Well I guess if you’re going to be addicted to something you might as well do it right. Forgetting that he’s been smoking crack cocaine since he lost his job. Is there a way to do that right?

Her boyfriend says she should never tell her parents what she really wants because they always give her the cheapest version, for example, she wanted music and they gave her a boom box so the sound is thin and tinny, not rich and enveloping like the stereo in his childhood bedroom or the stereo in his dorm room or even the stereo in his car. But it was her mother who gave her a boombox because her father is gone. He doesn’t understand that she does not wish or dream in stereo.

The watch her husband gives her has a blue face, silver engraving, a brown leather band. He says it’s time. He says she’s never had a real watch before, therefore she’s been out of time. He called her last watch a fake-watch but she called it magic, blank-faced but if she looked close it was a mirror, and though the hands never passed by numbers, they spun round and round and round. He says it’s time to wear something real and right, it’s time to not be late, it’s time to keep track, it’s time to be oriented to time. She says oh thank you, in a thin voice, her eyes wide, the veneer of her appreciation stretched so thin it almost snaps.

Later, the gift she gives her daughter is a deer-head. Not a buck, a doe, a less impressive prey except when considered through the lens of mercy. Years ago while her own mother worked and her father stoned himself to death, her brothers taught her the patience of the deer-blind. Breath-quiver, bow-quiver, split slats and sunlight, day-long smell of dust on wood and leaves browning. Spot of blood when the aim is true.  Bottle-empty thirst, day-gone boredom, the snap of twigs or legs if lucky. Someone else to take care of the sawing and the stuffing. Now the deer-head hangs on her daughter’s wall with its tongue cut out, a deer-head in place of a headboard, her very own black-eyed, wordless warning.

Melissa Benton Barker's work appears in Moon City Review, Longleaf Review, jmww, and elsewhere. She has received Best of the Net and Pushcart nominations, and she is currently completing her first collection of short fiction. She lives in Yellow Springs, Ohio with her family.