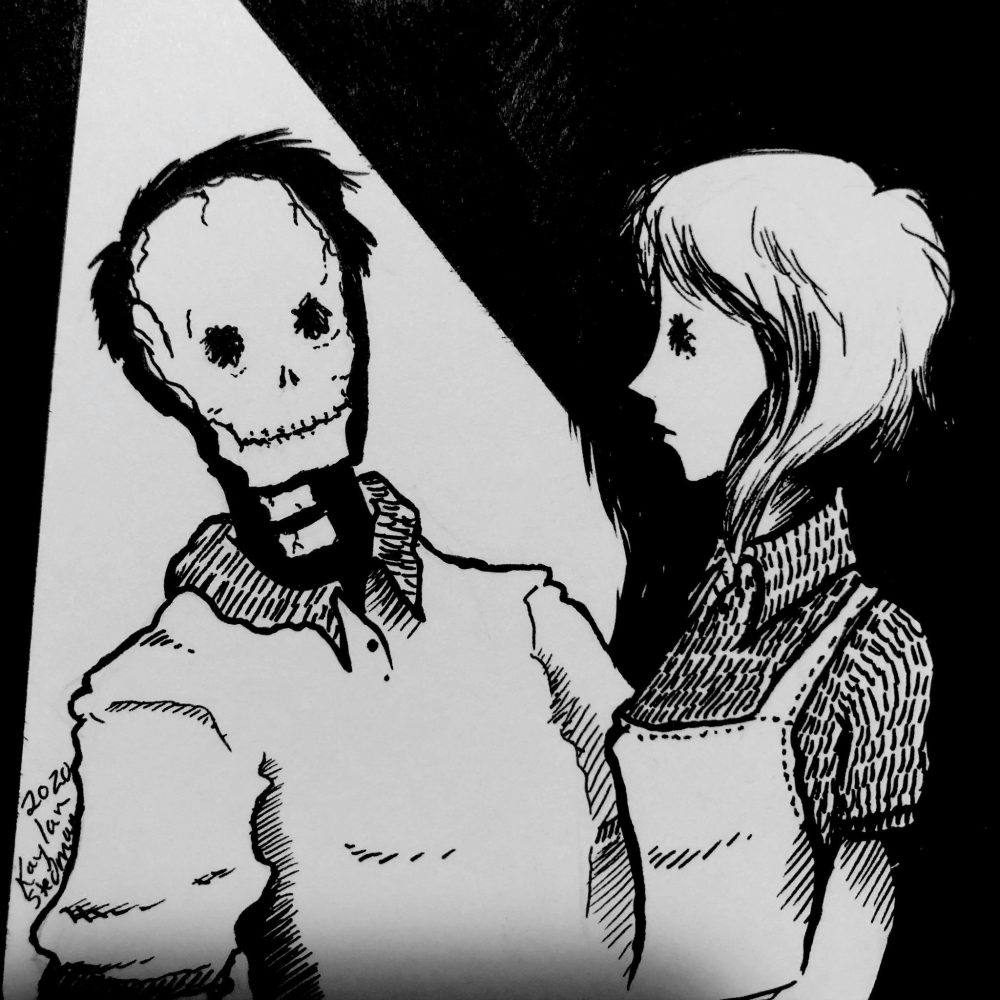 I try to avoid touching the new manager, but on his first day he hands me a box of crisps that need to go on the shelves. It’s enough to link us, and I find myself in his too-warm hospice room, staring over his wife’s shoulder as we watch him die. She turns to face me, as if she can sense that I’m there, but the scene cuts, and I’m back in the shop.

He introduces himself as Tom. He’s young, thirty years away from the diagnosis of prostate cancer that leads to that hospice bed. He offers his hand and I shake it, because by then it doesn’t matter—I’m already infected with knowing. But I get a weak burst of it again, like an afterimage of the sun.

I tell him my name’s Susan. He calls me Sue and asks how long I’ve worked at the supermarket as we restock the shelves.

That night I tell my husband Jim about the new boss.

‘That’s nice,’ Jim says, but there’s a flat tone to his voice, a timbre that shows that he isn’t listening. He leans forward on the sofa and focuses on the remote, clicking through channels, settling on none.

Jim dies just like this, of a cardiac arrest while sat in front of the television, a fact transmitted with perfect clarity through a nervous handshake on our awkward first date. He’s alone, I presume because he outlives me, and I ponder again how long he sits there until somebody finds him, how long he stays on that last channel before someone turns the television off.

Jim finds a programme he’s happy with  and he eases back into the sofa, the remote control in his lap.

The next day I’m on the till. Many customers are regulars, and inert, but there’s a flurry of strangers who share their death with every banknote or receipt that passes between us. Heart disease, cancer, stroke. I pause when it’s an accidental overdose. It’s a woman of about thirty, with a toddler. Neither are much older at the end.

‘Take care of you,’ I say as she wheels her trolley away, but she doesn’t look back.

I turn to see Tom walking the tills. Someone’s decided against the beef in their basket, and it needs to go back in the display fridge. Tom puts his hand out and I give him the meat. Nothing else passes between us.

That night Jim watches a show where couples answer questions about each other to win a holiday—bra size, favourite album, toothbrush colour.

‘We should go on this,’ he says, but I tell him that he’d get the questions about me wrong. Jim doesn’t answer, and the conversation ends there, without even the chance to peter out.

I stare at Jim, and I think of our first date, and how I’d let the vision of him dying in an armchair wash over me, like all the others. I didn’t wonder where I was in his death, because I never saw myself in his life, not then. But now I do wonder, because it’s getting better, this nightly dress rehearsal. He’s getting older, easing into the role, looking more the part, and not for the first time I have the urge to blurt out what I saw on that first date.

I imagine myself on the show, being asked how Jim dies, and if he’s alone, and if he’s not found for a while. Getting the questions right to loud applause.

A week later there’s a shoplifting. Tom is in the office above the shop, and I rush up to tell him. Just packets of ham, I say, and not the whiskey cleared out again. I stand over his desk, looming over him like I do at the end.

‘Well, maybe they needed it, then, Sue,’ he says, and he smiles. It’s kind, almost beatific, and I feel something shifting, inside me and between us, but I don’t know if this is a misfire—if the smile is for me or for the shoplifter.

I think again of his last moments. Prostate cancer can be asymptomatic, lurking sly and unseen for years. Tom could have it already. I could warn him, but I say nothing.

He asks me to log the theft with the police. He turns back to the computer, but he doesn’t type anything, and I sense him staring at me as I go back down to the shop.

At home I find Jim quizzing along to a television show. I start to tell him about the stolen ham, but he puts a finger up to stop me interrupting, pausing me rather than the programme.

I march into the kitchen and start dinner. I hear clapping over theme music, and the creak of the armchair. I expect Jim to follow me, maybe even to say sorry, but instead there’s the clack of his wedding ring against the remote control as he scrolls through channels.

I feel something shifting here too, as if I’ve arrived at the crest of a hill, and there’s a long and difficult descent ahead of me. I think of Jim years from now, an old man with his television, and I wonder if I do die on him, or if I’m somewhere else when he goes, living another life, dead to him another way.

I think of Tom too, and how he dies. I play it over in my mind, this snapshot of him and his wife. How she turns her head, as if she can sense that I’m there in the room. As if she knows that I’m stood right behind her, watching them.

Paul Nevin is a writer of short dark fiction from London. His stories have appeared in Cabinet of Heed, Fictive Dream, Idle Ink, Molotov Cocktail, Vamp Cat Magazine, and XRAY literary magazine. He is on the lookout for the perfect ghost story. You can follow Paul on Twitter at @paulnevin.