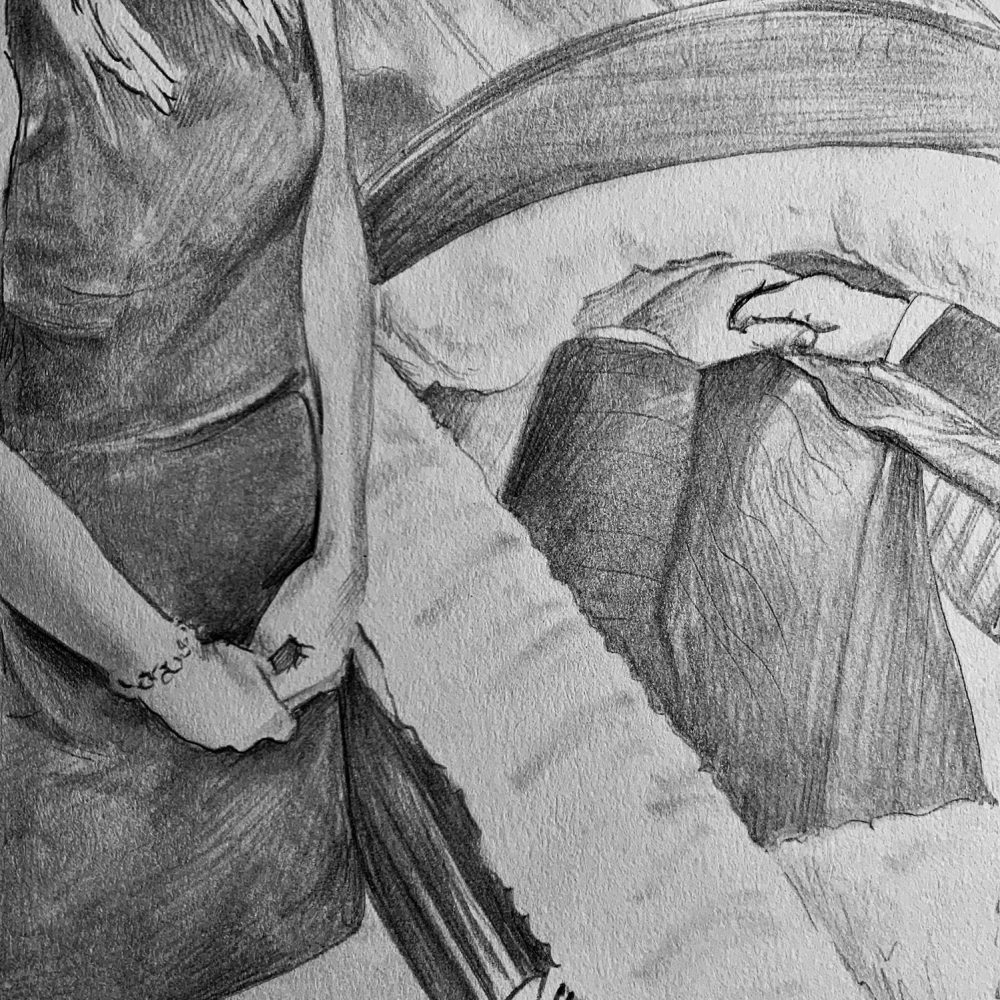 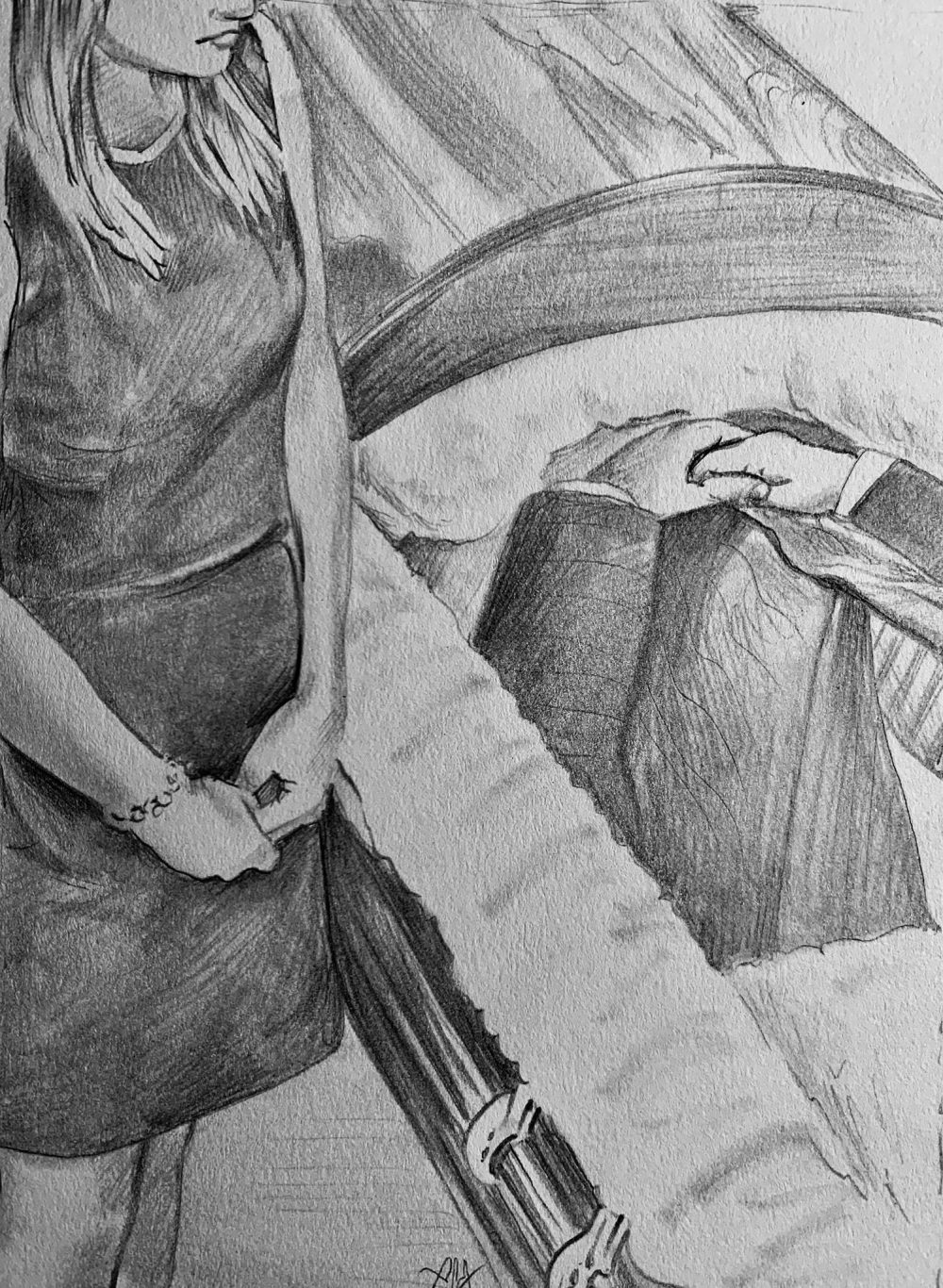 It’s getting darker, she thinks, and yes, the light is dimmer, the trees lashing a little: a storm. She is eating an English muffin with the remains of the jam. She’d gotten up at eight, lain in the rumpled sheets for ten minutes, took a bath, lying in the cooling water. Then: plaid bathrobe, lavender socks.

She is tired of breakfast, tired of the muffin, offended by the table which is messy, crumbs and greasy knives. On the TV a psychic is talking to the morning show host about her garden which she says is laid out in a spiritual manner. There is a message from her mother but she knows it is about Buddy and doesn’t answer. Buddy is dead.

When she leaves the house her hair is still wet.

At work, the secretary says she looks tired, also the mail guy and the bearded professor who teaches Japanese. Tired, she thinks, is shorthand for how she looks ugly and swollen with what she knows, which is only what everyone knows. When she goes to lunch, a woman is walking ahead of her whose left foot drags with every step.  On the patio, she wipes pollen from her seat, and then there is Marilyn yoohooing, saying can I join you or would you rather be alone? No truthful answer is possible. Marilyn talks about how she wants to find a permanent relationship, a familiar monologue, saying she is assertive, too tall, she scares men, which is probably true.

When she gets in the car a few drops of rain are falling. Carlights on. She is stuck behind a slow minivan. At the light, she listens to the radio and then a man is running toward her, naked, middle aged but in good shape, running hard as if someone is after him. He tries the door to her car, which is locked and says something she can’t make out, and then he’s gone, running down the street behind her, a police car after him. How hard the street must be under his bare feet, she thinks, how painful the little rocks, the stray bits of trash, the bits of people’s cars that have fallen off, rusty and sharp edged. She is not a philosopher, not a spiritual person. She doesn’t have the tools. But does anybody?

Buddy got her her first job, a cousin’s duty, he said. In the movies her father took, Buddy sat on a blanket on the grass holding her baby self in his skinny pre-teen arms. He had a way of laughing, didn’t he? It wasn’t like anyone else’s.

The red brake lights like cherries, the gray sluicing rain, bluish air, cars inching along, the sudden quiet under a bridge. Donovan is playing on the oldies station. Something about the ocean, something about the sea, about below, and she’s driving slow slow. Water puddles on the freeway.

At home, she calls her mother and at last she hears the details. Drunk driver. Head on. Killed instantly. His wife Sarah in the hospital.  Wake tomorrow, funeral on Saturday. This makes her want to cry and she covers her mouth so her mother won’t hear. But it passes.

She goes upstairs to paint the bedroom. She liked the color last week. When she goes downstairs to clean up she pokes the paint-stuck holes in the drain with a skewer so the paint-water will go down. She washes and washes but still the roller is stained and she gives it up.

Dressing for the wake: gray skirt, white blouse. Lunch at her mother’s first with her sister and her niece, Janie. Her sister shows them photos from Bermuda, and then they get ready to go. Janie has brought a make-up box with her although it only contains a lipstick and some plastic jewelry. She and her sister and Janie crowd at the mirror, fixing their hair.

At the funeral home, she hugs a line of relatives. Dick: hi. Jim: hi. Talk to Cammy about their cousin getting married, which neither of them plan to do. In the middle of all that she goes to kneel by Buddy. His hands, made up and tinted pinkish – more wrinkled than she expected. Marine Corps flag draped above. She makes herself look at his face. It’s hard to look at. He’s holding a rosary threaded through his fingers, and she wonders who put it there. Why not a screwdriver, for he liked to fix things. Why not one of the cowboy paperbacks he liked. Why not a can of beer or a piece of pie. He liked cherry pie. She feels all of that in her throat, the hard press so that she can’t swallow and then she goes back to stand by Buddy’s sister, who is wearing a proper black dress, her black hair wild around her head as if she had combed it a week ago.  Someone replaced her by the casket, a woman who is leaning in for a long time, more than a minute. Does she try to kiss him? To hold his hand? The people who were standing by the casket move away, not wanting to be her audience.

While they wait for her mother, she and her niece walk to the manicured garden at the back of the funeral home. How much older is he, Janie asks, and she answers that he was fifteen years older. So he’s pretty old, Janie says. Was. He was pretty old. The garden is a brick circle, with red, white, and blue flowers. They walk on to where there is a ravine, wild, weedy, beautiful. I wish there were more places like this, Janie says. Yes, she says. More places you could just walk through for a long way, Janie says. Yes.

Mary Grimm has had two books published, Left to Themselves (novel) and Stealing Time (story collection) - both by Random House. Currently, she is working on a dystopian novel about oldsters. She teaches fiction writing at Case Western Reserve University.