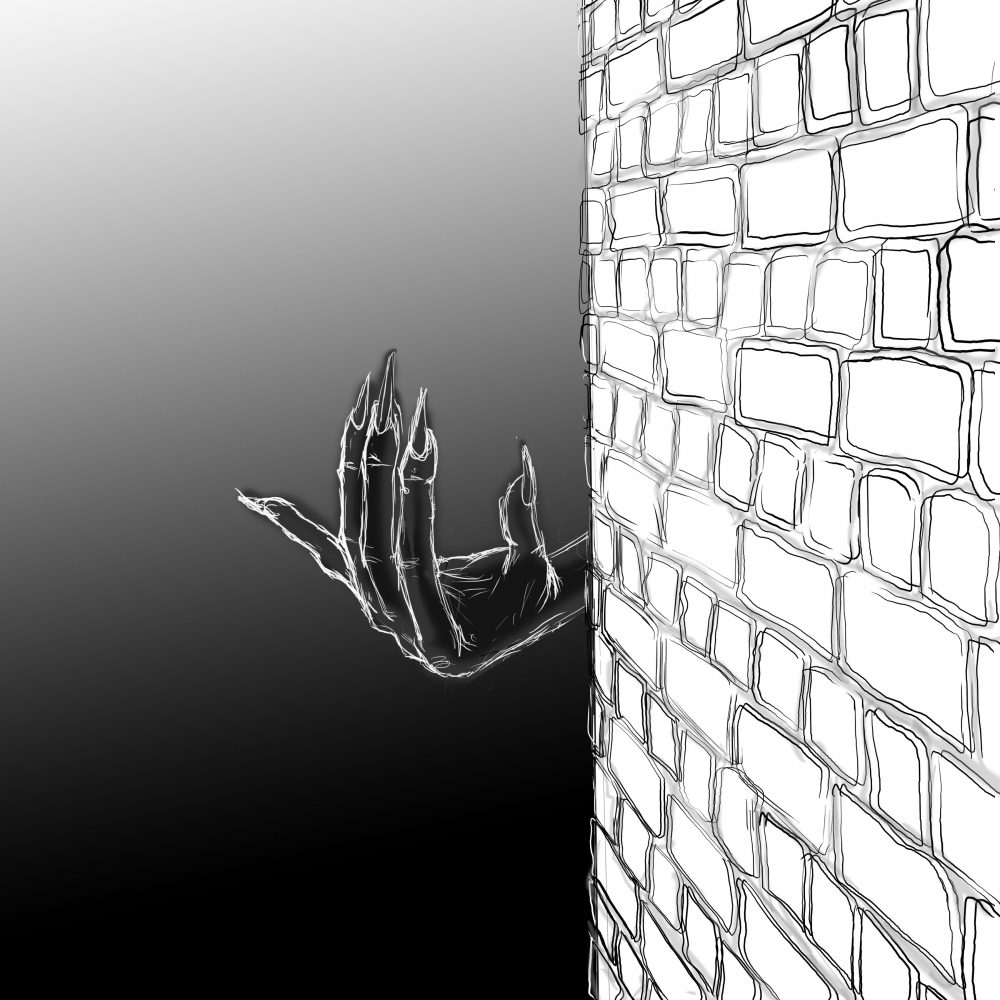 Monday, Joel was laid off from the advertising job he had always regarded with slight contempt, a stop-gap meant to get him through the post-college years, one which had never blossomed into worthier opportunities.

Tuesday, he kissed Carla good morning, her lovely cheek pillow-creased, leaving her with a tender lie of omission and spending the day at Starbucks, pretending to be at work.

Wednesday, the firm sent home a slender envelope of COBRA information, which Carla opened. She greeted him at the door (as he returned from a more expensive coffee shop this time, one that made him feel as if that next, better job would materialize soon) with the envelope beginning to crinkle from the tension in her hands.

She left to spend the night at her sister’s downtown loft anyway. “It isn’t safe,” she said with sad eyes, holding the door frame. A small shrug, as if to say, you know how it is. He did. They all knew. They’d all seen what happened.

Thursday in the subway station, Joel saw long, spindly fingers out of the corner of his eye. The fingers emerged from the dark well alongside the tracks, waving gently, scenting the air, twiddling in his direction. Joel began to sweat into his sharp business casual, donned that morning in his lonely apartment in anticipation of miraculous phone calls, unexpected interviews. The elderly woman waiting beside him stared at the searching hand emerging from the darkness at the edge of the platform, then glanced to Joel, the darkness, Joel, the fingers. She gathered her shopping bags and hurried away down the platform.

Joel abandoned the subway and Ubered across town to a co-working space, where he painstakingly copied and pasted lines of his resume into the application for a rival firm.

My passion for advertising is unequaled, he typed, swallowing back the cold brew and bile that rose in his throat.

When he tried to hail a ride home, Joel discovered that his data plan was gone, his phone a glossy brick. Hunched over his laptop in the lobby of the coworking space, a frantic chat session with a representative revealed that without the corporate discount from the firm, his monthly payment had not gone through.

On the train home, other passengers edged away, not making eye contact with Joel, as the long dark fingers pried their way between the car doors, not yet forceful enough to pry it open.

“What?” Joel’s heart was racing, but he flung his arms wide in a show of bravado. “Do I have something on my face?”

Debarking, Joel averted his gaze from the dark mass limpeted to the side of the car. It wouldn’t come for him yet. He still had time. An apartment, a girlfriend, a credit card. A family who loved him.

Joel broke the news on a video call home. His mother looked near tears.

“You can stay here as long as you need,” she said, voice quavering. “I saw a hiring sign at Ace Hardware. I’ll make up your bed for you.”

His father looked just the way he had the night Joel, nervously taking a date to the movies, crashed the family Volvo into a bollard right there in the theatre parking lot. “Just do what needs to be done, son,” he said. “Whatever it takes.”

Joel didn’t go to the coffee shop the next morning, didn’t change out of his pajamas, stayed in bed sending LinkedIn messages to acquaintances: a college roommate, an old professor who’d gone into private industry, a woman he’d kissed once in a shameful, drunken hallway moment at an advertising conference. He watched the read receipts appear on these messages, but no responses were forthcoming.

The phone company still wouldn’t reinstate his account, and now something was wrong with his joint checking account with Carla. He sent her a Facebook message.

Hey can we talk? Isn’t this a little dramatic?

The read receipt popped up moments later and hung there, damning as any quiet phone line.

Joel shuffled downstairs in slippers and robe to check the mail, where he found a thick packet from the firm with informational pamphlets: Filing for Unemployment and Protecting Yourself Common Lifestyle Predators. Joel flipped through the Table of Contents, then to the “Early Days” section:

Because Lifestyle Predators can smell failure, it’s important to rebound promptly from any incidents of unemployment, romantic relationship breakdown, medical crisis, or academic failure. Remember: they can smell you! They know what you did!

The manager met Joel on the way back to the elevator, stopped him with a gentle hand on his shoulder.

“Lease is up at the end of the month,” he said with regret in his voice.

“We’d like to renew,” Joel said, clutching his pamphlets.

The manager shrugged: you know how it is.

The creatures were at the lobby doors now. Their fingernails tapped and scraped at the glass.

“I can’t have this in my building,” the manager said. “Scares people. Ain’t safe.”

The drumming at the glass intensified.

The manager backed away, into the doorframe of his own apartment. Joel could hear the TV blaring in the background, the toddler shrieking, a vacuum running. A world of the manager’s own, needing protection.

Joel’s sad cat lady neighbor was waiting for the elevator ahead of him, but skittered away when she saw him coming.

“Real nice,” Joel said, hitting the doors close button. That bitch was safe, but not him?

He thought of Carla, of her pillow creases and mussed hair in the morning, of the apologetic reply that could await him upstairs even now. A win. A point in his ledger. Please.

A clang from above; a great weight dropping to the elevator roof. Fingernails beginning to skritch at the access hatch.

Please, he thought. Please. A win.

Jane Ridgeway is a fiction writer born and raised in Seattle, now living in the San Francisco Bay Area. She was the Summer 2018 Writer in Residence at the Kerouac Project of Orlando, Florida. Her work appears in the Cover Stories anthology from Volt Books. She has an MFA in fiction from the University of Oregon, and has taught creative writing and literature at the U of O, as well as at prep schools in California and Hawai’i.