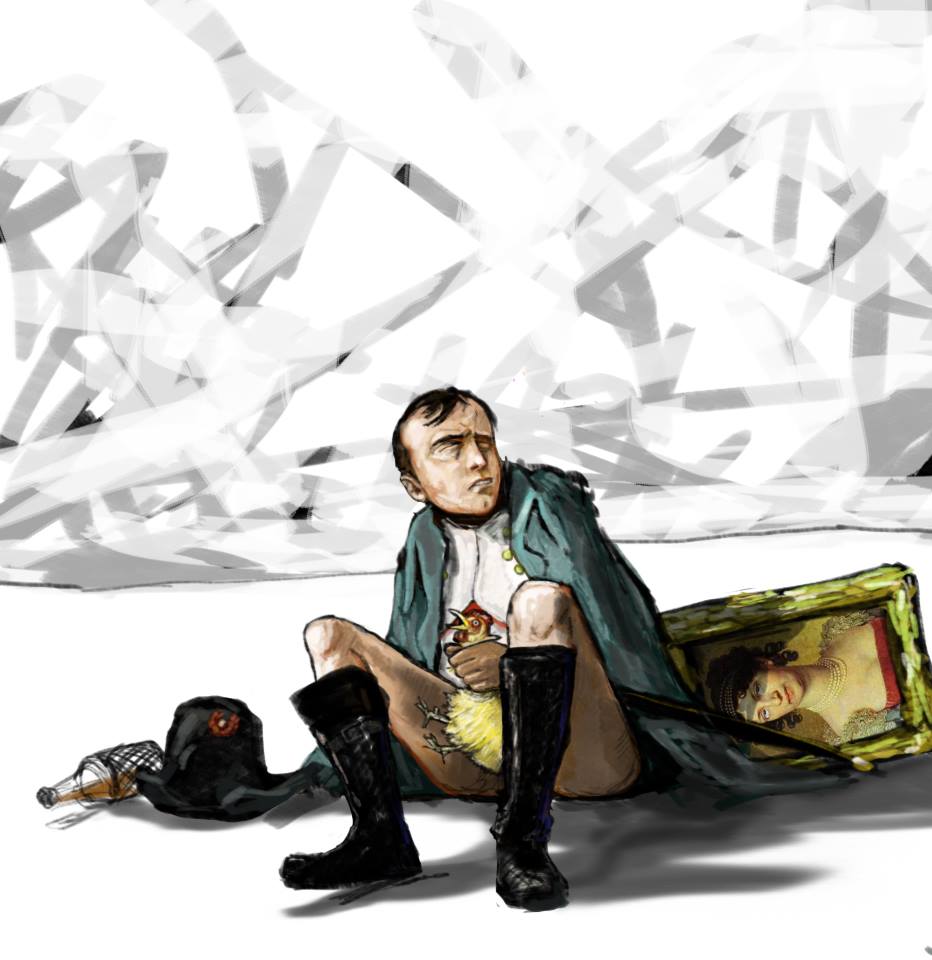 “They’re eating their own horses. Horses, for fuck’s sake.”

Napoleon pushed his ass deeper into the thick, ornate carpet on the bedroom floor of Tsar Alexander I. It felt good after the tumultuous ride. A small pleasure after so much misery. A bottle of cognac lied exhausted on the floor next to him.

“Fucking pill,” he said, clutching his belly. The gold buttons threatened to pop with stress under his hand. 30 minutes earlier he’d taken the suicide pill he kept in the small leather pouch around his neck. A homemade mixture of belladonna, white hellebore, and opium. He’d had it since the Egyptian Campaign. It must’ve lost its potency. All it did was make the emperor violently puke in an Oriental vase in the corner of the Tsar’s room.

“Should’ve tried to kill myself earlier,” he lamented.

The Russian Campaign was a remarkable disaster. 80 percent of his troops had frozen or starved to death on the frozen steppes. Supplies were depleted. Ammunition and cannons abandoned along the way.

They thought Moscow would save them but Moscow was on fire. Russians without the means of retreat were looting in the streets alongside French troops.

Napoleon clenched his eyes closed tight enough to send tremors through his round melon head. “Get your shit together, Boney.”

Thoughts of past victories lurched through his mind. None of them mattered. Nothing mattered. He was finished and this awesome humiliation would be recorded in history books forever.

Sitting up, he launched the cognac bottle across the room with the precision of a true artillery expert. It exploded against the Tsar’s oak dresser. He buried his head in his hands and sweat drained from his greasy black hair.

The heavy bedroom door opened a crack. Commander Louis Davout stuck his pointed nose into the room and said, “Everything alright, mon empereur?”

“I thought I heard a crash.”

“Sorry? For what, mon empereur?”

Napoleon mopped his brow with the back of his sleeve and looked up at Davout. “Pour tout. Everything. Bringing you all here. I fucked up.”

Davout opened the door just enough to step into the room. The smell of cognac and vomit hit him hard. “Mon empereur, we would follow you into the bowels of hell and beyond. Viva la France.”

Napoleon lazily pumped his fist and asked, “Is there any more licorice?”

Davout spun on his heels and closed the door behind him. Napoleon rose from the carpet, wavering a bit on the balls of his feet. The room spun. He slowly made his way over to the large window, blinking rapidly to aid his balance. The Moskva River was beginning to thaw from Moscow’s flames. Napoleon meditated on his doom.

He reached into his breast pocket and removed a folded piece of paper. It was a letter from his Josephine. Along with the failed suicide pill, Napoleon kept it on him at all times.

Sweet and matchless Napoleon, how strangely you work upon my hearts.

But how can I rest anymore, when I yield to the feeling that masters my inmost self? When I quaff from your lips and from your heart a scorching flame?

He still wasn’t sure what the fuck that was supposed to mean. Regardless, Napoleon achieved erection.

He waddled over to the Tsar’s bed, pants around his ankles, and collapsed on top of the silk sheets. It began.

The door creaked open and Napoleon quickly rolled over onto his side, his back now to the door.

“Mon empereur! Great news! I have your licorice!” Davout look at his emperor’s bare ass and frowned.

“Merci, Davout,” Napoleon said, his manhood still in his hands. “ Please leave it on the floor and remove yourself.”

“As you wish, mon empereur.” Davout placed the two licorice ropes on the floor. The door closed with a clack.

Napoleon tried to begin, but was at half-mast now. He’d lost his train of thought.

“You’re fucking kidding me,” he said to no one.

On the wall across from the Tsar’s bed, hung a portrait of Princess Elizabeth Alexeyevna. Napoleon examined it a moment then sprung from the bed, stumbling over his pants around his ankles. He removed the portrait off the wall. The frame was heavy.

The modest portrait was enough for Napoleon’s mind to paint a whole new series of fantasies.

He lifted his pants and stepped over to the dresser and removed a thin decanter of perfume. He poured its pungent contents on the carpet. Very carefully, he scraped his dripping calvary off the portrait and into the decanter, which he then placed in his breast pocket.

“The Bonapartes, the Glory of France, will live on.”

He wiped himself off on the Tsar’s pillow, picked up the licorice, and spat on the carpet before the door closed behind him.