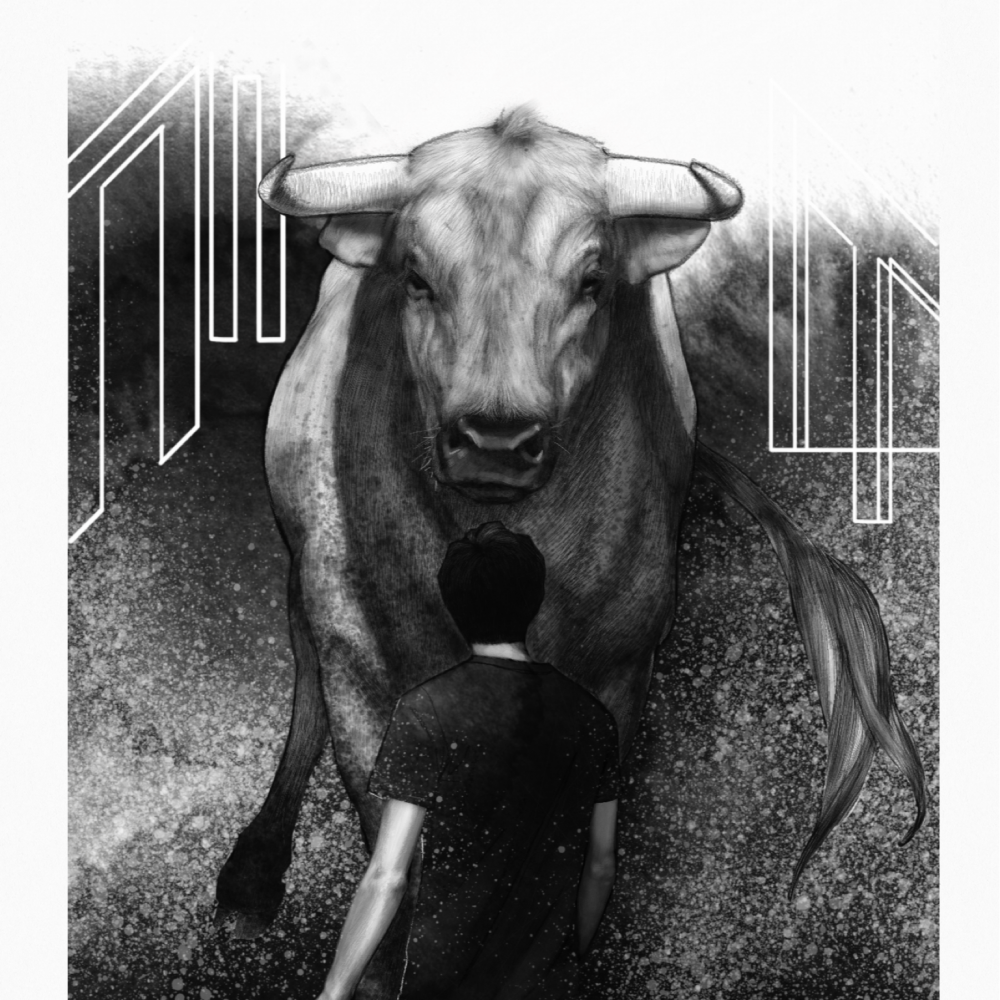 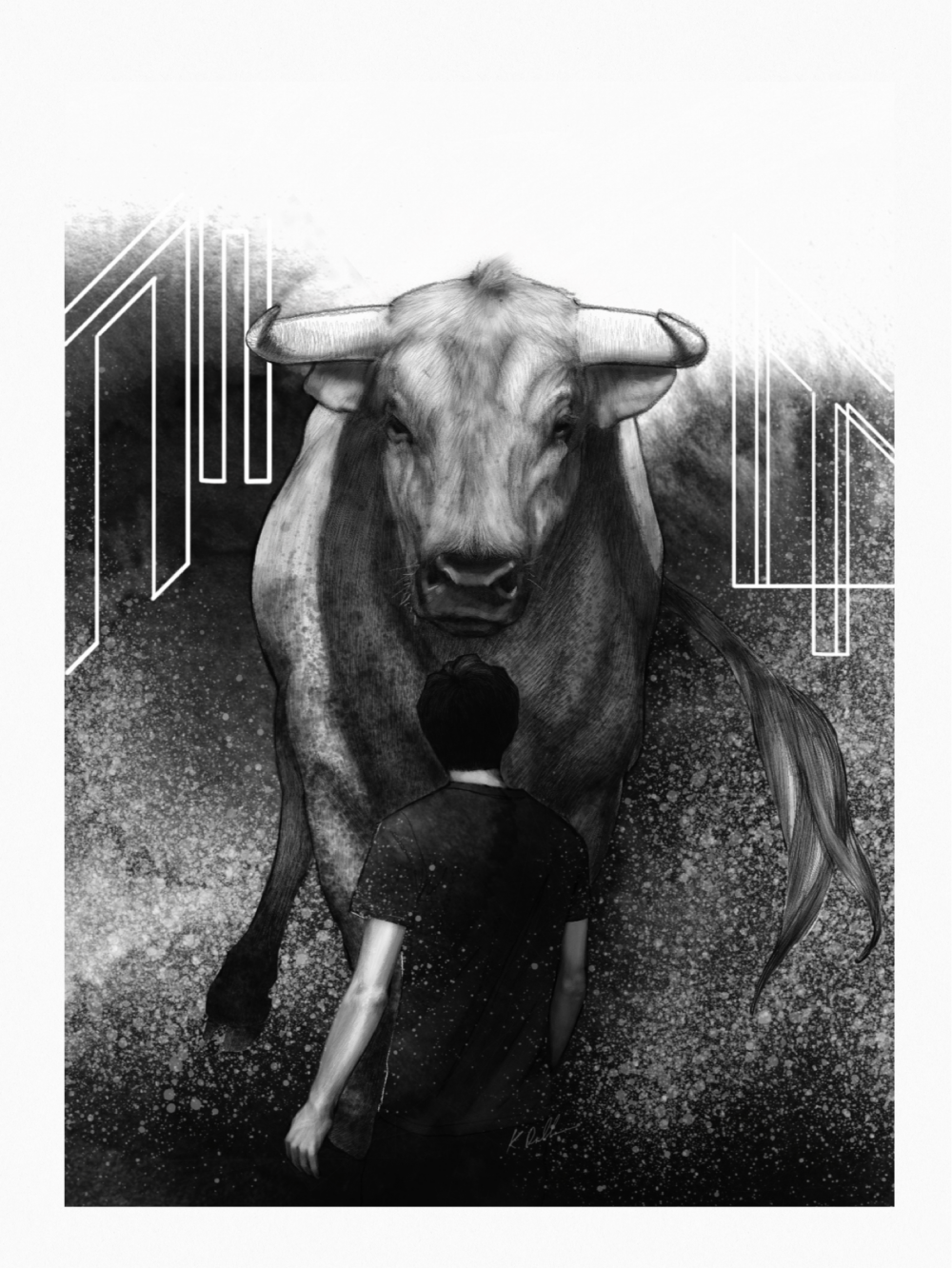 The eyes will believe the pleasurable, like the S-10 pickup truck I got for my sixteenth birthday. Or the tears on my fiancé’s face when she said yes. Then there’s the depressing, like my father’s name on a granite tombstone. They distort the vision, making it harder to believe. But above all, there’s the terrifying, like car headlights as big as bombs coming down my side of the road (thankfully, they swerved back). Thing is, the terrifying cripple you, and that’s what happened on the day I encountered the red, crying eyes of a black bull charging towards me. We didn’t live within twenty miles of a farm so this bull was unimaginable. As I stood by the door of my car, the sight of the manic, steaming bull was not surreal but other-worldly. A green alien with a long neck, small head, and giant eyes would have been more believable. However, the scene was quite real and entering into it I was perhaps distracted. No, I am certain I was distracted. I had arrived home early from work because of another strange situation. Emily, my fiancé, was home sick and I had called to check on her. She said she was doing better and just needed sleep. I said good and that I would see her after work. But just before I hung up, there was a foreign sound. Like one you might hear just as you drifted off to sleep. What was that? Was that a knock on the door? Or were you just asleep? You couldn’t be sure so you had to get up, turn on the lights and dispel the paranoia. Well, the sound I heard on the phone sounded like a snicker, like a squeak of air meant for restraint. It certainly wasn’t Emily’s air. I knew that much but still. I left work early. I parked on the street next to our house behind Emily’s car. No other unfamiliar cars were around. I said a small prayer. I prayed the strange noise was a blip in the cell service, a surge of energy that coincidentally sounded like a man’s snicker. Then, as I stepped out of the car I saw the bull. I don’t know how tall bulls generally are but this one seemed ten feet tall, as tall as the street trees, and as he hurled his mass towards me, my nervous system shut down. The disbelief crippled. Brain function ceased. The bull got within ten feet of me, close enough for me to hear his gasping lungs and see the long tendrils of saliva hanging from his purple lips, and then he darted. He swerved just like the oncoming car. Maybe because he sensed another earthly being in me or maybe because that was when the first shot rang out. Racing up the street behind the bull was a policeman with an assault rifle. The bull crashed through a neighbor’s fence, stumbled to his knees, and before regaining his footing, the policeman shot ten or twelve bullets into the heaving body. While this was going on, I failed to notice Emily had come to stand on the back deck. And I failed to notice that an older man, maybe twenty years older, had also come, half-dressed, to stand next to her. When I did see them, when I put them into focus, my eyes didn’t flinch. They believed. They knew everything of what they saw. They had seen that man many times before. He was Emily’s graduate advisor. He and his wife prepared wonderful vegan dinners and poured their guests copious amounts of wine. He, as Emily often reminded me, was fucking brilliant. Indeed, I thought. Fucking brilliant. So I returned to the disbelief, to the dying bull. Another policeman had arrived on foot and the two of them stood over the black mountainous animal, rifles pointed over its lifeless body. The one policeman said breathlessly to the other, you okay? Yeah, the other said. And you? Yeah, the first one said, and then they both turned to me.

Daniel W. Thompson’s work has appeared or is forthcoming in publications like decomP, WhiskeyPaper, After The Pause, Third Point Press and Cheap Pop. He works as a city planner and lives in downtown Richmond, VA, with his wife and children.