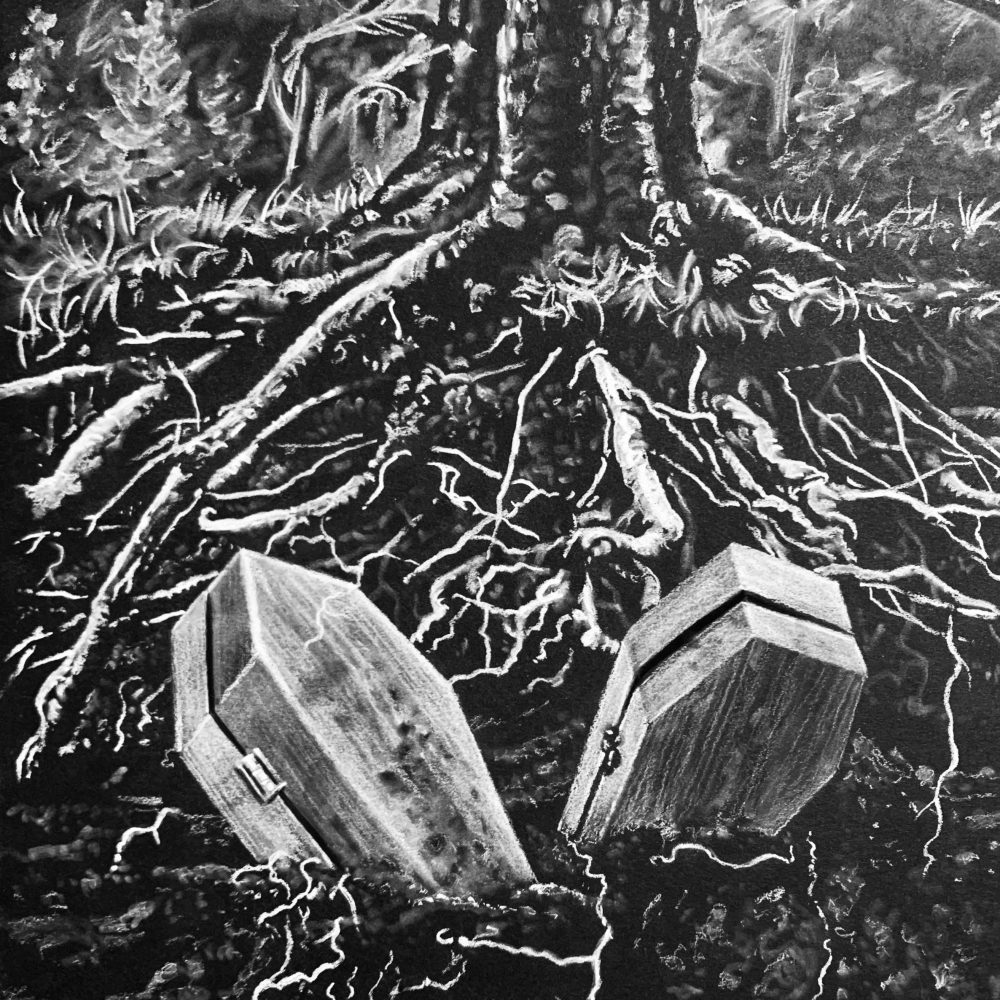 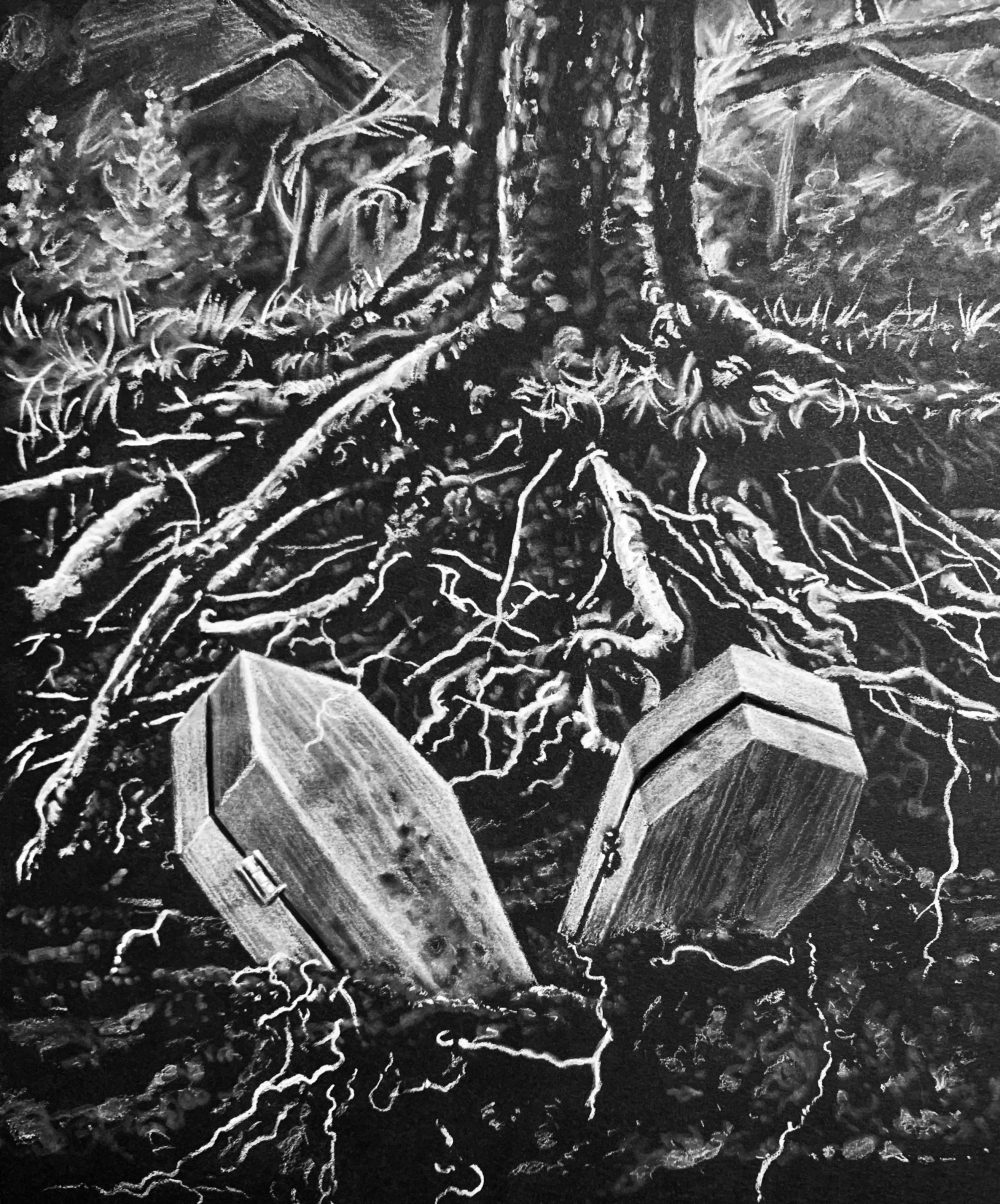 Jack buried both cats under the laurel oak in the back yard of his yellow ranch house in DeLand. He bought their tiny caskets from a company called Pet Eternal that he found online. He never told anyone how much he paid for the kitty coffins, but it was more than he could afford – especially after his divorce. Two years ago, when he buried the Siamese ladies, he made sure that they would be far enough away from where Chad’s blow up pool would be set up – come the first of July. It seemed disrespectful for a kid to be splashing about directly over the Pet Eternal Premium Wood Cat Caskets handcrafted in Bangor, Maine. The laurel oak was the only shade on the entire property, and it had to serve a co-parented six-year-old boy’s summertime fun and two dead cats.

“For two-hundred dollars, I can trim those branches back,” Carl said, lighting his Pall Mall. “But if that thing ever comes down it will take the house, Jack.”

“I know one thing for sure. Oaks fall. Top heavy and rooted in sand.”

“Laurel oaks are only good for about forty years. Like people. After forty, they get the heart rot,” Carl said, taking a long drag off his cigarette. “If you want longevity, you plant a live oak. Those fuckers are strong.”

“Do you take cards?”

“Do you take checks?”

“Then why are you asking?”

Carl dropped his cigarette onto the grass and crushed it with his steel toe.

“Pick that up. My kid plays back here,” Jack said, heading toward the side door of the laundry room.

In the laundry room, Jack pulled a dirty towel from an overflowing basket of dirty clothes and wiped his forehead. It was hot. It was June-in-Florida-hot. He stood in front of the washing machine for about twenty seconds before he picked up the basket and dumped its contents into the old Whirlpool’s tub.

In the kitchen, Jack removed a can of Diet Coke from the refrigerator. The sink overflowed with dishes, the trash can under the sink brimmed with take-out containers, and the oversized microwave above the stove served as a protector of bread, cereal boxes, and cookies against the wolf spiders, water bugs, and anoles that Jack had long since made peace with as the co-inhabitants of his yellow ranch house. “It’s Florida,” he said, explaining his stance against pest control to any new visitor.

The same cohabitating philosophy extended to the outside porch area where a dozen paper wasps nests decorated the entranceway to Jack’s front door. “It’s my security system and my protection against Jehovah’s Witnesses,” he said to his ex-wife when she had voiced concern about the safety of their son. “I don’t fuck with them. They don’t fuck with me. We have an agreement,” he said. “The wasps understand what the Witnesses do not.”

After peeling back the stay-tab on the Diet Coke can, Jack dumped an ounce of the brown liquid over the dirty dishes stacked in the sink. Placing the can on the edge of the counter, he opened the cabinet above the empty drying rack and removed a liter bottle of Jack Daniel’s Old Number 7. He uncapped the bottle with one hand and tilted it until the lighter brown liquid oozed from the can’s opening. This ritual helped take the edge off of the morning.

The falling oak didn’t sound like an explosion or even what one might expect a heavy crash to sound like. Instead, it was a silent wave of energy that lifted the kitchen floor up several inches in a delayed suspended millisecond. In that frozen millisecond, Jack didn’t hear the Diet Coke can as it landed and bounced on the linoleum. The only sound was the Husqvarna chainsaw’s motor as it choked its way to a stop.

The impact of the laurel oak on the laundry room’s roof was as swift as it was devasting. The laundry room was an addition to the house that the last owner had built by himself. The concrete slabs under the laundry room were not up to code, but neither was anything else about the addition. “The guy was an idiot,” the inspector told Jack when he was buying the house.

A branch about the width of Jack’s waist sliced through the middle of the laundry room’s roof and pancaked the Whirlpool. The oak’s trunk hovered over the large gash in the ceiling, threatening to finish off the last owner’s shitty construction work.

“There was some Spanish moss roped around two branches. When I cut one, it pulled the other. That is what it looks like happened,” said Carl. “Weight and momentum.”

“Are you fucking kidding me?”

“You’re mad. You probably have a right to be mad, but we need to take care of something that is creeping me out right now, Jack.”

“What the hell are you talking about?”

“Those tiny coffins.” Carl pointed at the two Pet Eternal Premium Wood Cat Caskets that the base of the oak exposed as its roots ripped open the earth. The wooden boxes were as pristine as the day they had been put into the ground. The extra expense, that at the time Jack couldn’t afford, now seemed worth it. These were the quality caskets that the Siamese ladies deserved.

Christopher Ramsey is an educator and a filmmaker living in Deland, Florida.