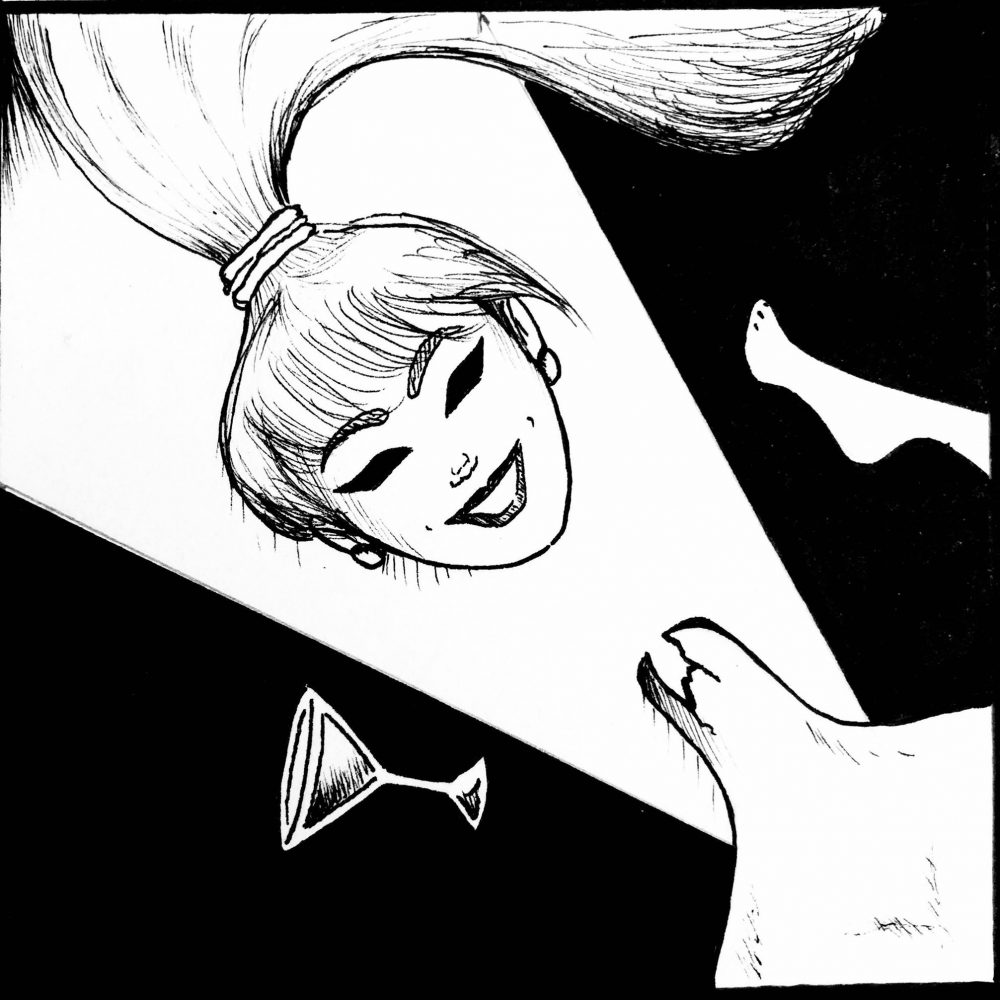 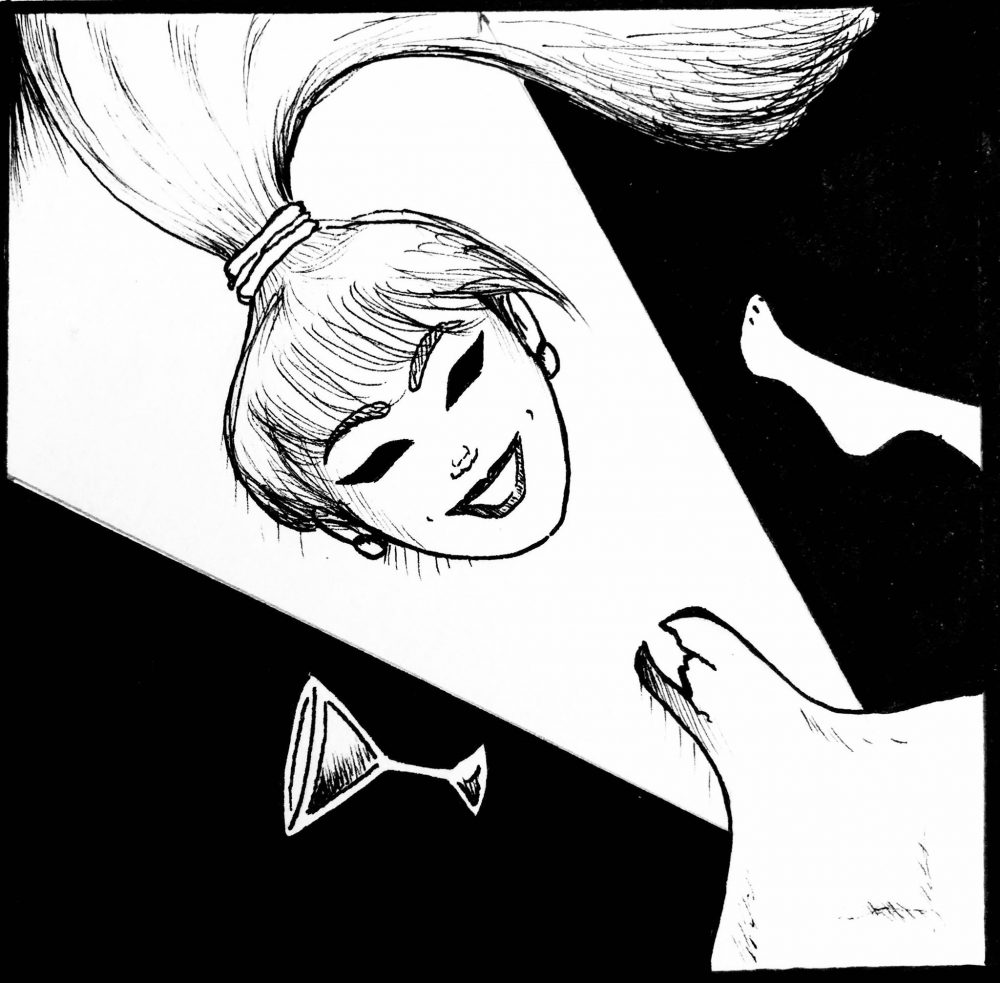 Malibu Lacey wears cutoffs and tank tops, or wraparound sarongs and tiny scrunchies to hold up her hair.

Malibu Lacey goes pretend swimming and lies on her blanket under the sun. She’s not the kind that gets tan, though. She didn’t come with stickers that leave behind pale shapes on her skin. She remains unmarked.

Malibu Lacey drinks piña coladas made of air and air. She sips them from tiny pink wineglasses because Girl lost the bigger glasses, which is fine because she’s trying to cut back anyway.

Malibu Lacey is trying to cut back on a lot of things, mostly things that involve Girl’s brother. Malibu Lacey hasn’t been quite the same since the first time he ripped off her head.

Girl was at a sleepover at a friend’s house, and had left Malibu Lacey at home, and must have said something to her brother to make him mad. This is what Malibu Lacey tells herself to justify what came next: the boy’s clammy fist clenched her torso, pinning her arms to her side. Then his other palm covered her face and his fingers curled around the back of her head. And then she felt a snap and both halves tingled—she felt each half—before she slammed against the wall.

From where she lay, Malibu Lacey could see her shoulder sticking up from the folds of the bedcover. She’d never seen her own shoulder before.

Girl’s mother found her and tsk-ed, and popped her head back onto her body and went to yell at the boy. Then all Malibu Lacey could see was the ceiling, dull cream with flocking. She counted the peaks and valleys until Girl came back home, and forgot how high she’d counted as soon as Girl picked her up.

It still makes her tingle, thinking about the curve of herself. Until then, all she could see was her forearms, and her legs up to her knees.

The second time the brother popped her head off, he hid it in a different room of the house, face down in the carpet, which wasn’t exciting. But the third time, he threw it into the yard. She watched a line of ants trek across the lawn, their shiny black bodies flowing like water between blades of grass. A few of them tickled her cheeks with their twitching feelers, but once they realized she wasn’t food, they went back to carrying bits of grain much larger than themselves.

Things were just getting good when Girl found her and plucked her head out of the grass. To this day Malibu Lacey wonders if the team of ants was able to lift that giant dead bumblebee and get it back to their nest.

Girl cried because Malibu Lacey’s head didn’t sit the way it had before. It kept tipping, she said, and her mother yelled at the boy again and said she’d use his allowance to buy Girl a new doll. But Malibu Lacey didn’t mind so much, because at least now she could look down even further and see her legs up to her thighs.

Then the boy got so mad, he took one of her legs off and threw it into the woods. So Malibu Lacey focused all of her admiration on the one leg she had left.

And Girl didn’t care, because she had a new doll, so the boy took off Malibu Lacey’s remaining leg and threw it on the floor, then did the same with her arms and torso and head. He left everything in Girl’s bedroom so she would see it.

While she waited for Girl to come home, Malibu Lacey took in the whole of herself: her broad shoulders, tiny waist and trim ass, her shapely arms and impossibly long legs. She began to tingle again with the beauty of herself.

Girl only put her back together again because she wanted a friend for her new doll. Now Malibu Lacey and the new doll drink piña coladas and lie on the beach and gossip. Malibu Lacey feels like she’s supposed to tell the new doll how beautiful she is. Girl didn’t say it outright, but Malibu Lacey knows what’s expected of her, knows the price for being put back together.

And yes, the new doll is beautiful, and she’s the kind that gets pale reverse tans when you put stickers on her skin. But that means Malibu Lacey is beautiful too, because they’re basically the same, except for the leg, which is living its best life out in the woods.

Sometimes Malibu Lacey feels things in her hip socket. She senses when her leg is frightened or excited, or when it feels like laughing. And happy things happen to the leg more often than bad things, so on balance, thinks Malibu Lacey, it’s a success.

And sometimes she purposely doesn’t tell the new doll how pretty she is, and the new doll gets cross and is mean to Girl, and Girl is then mean to her brother, who gets angry and goes into her room and rips Malibu Lacey’s head off again. Then Malibu Lacey gets to admire herself: from her dainty, permanently pointed toes, up her single shapely leg that stretches for days, to her wasp-like waist, and her breasts surging like impossible missiles out of her torso, up the curve of her shoulders, ending with the fleshy dull spike that slips into her head. She tingles then, imagining that spike slipping back into her head once more.

Sometimes the brother leaves one of her arms aloft, tipping a tiny piña colada directly down her neck. This is her favorite kind of afternoon. Her head feels like sparkles. She’s flying.

Tara Campbell (www.taracampbell.com) is a writer, teacher, Kimbilio Fellow, and fiction editor at Barrelhouse. Prior publication credits include SmokeLong Quarterly, Masters Review, Monkeybicycle, Jellyfish Review, Booth, and Strange Horizons. She's the author of a novel, TreeVolution, a hybrid fiction/poetry collection, Circe's Bicycle, and a short story collection, Midnight at the Organporium. She received her MFA from American University in 2019.